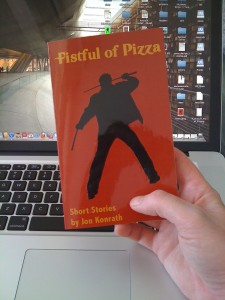 It’s almost Christmas!  Or it’s almost Hanukkah, and maybe it’s almost Kwanzaa (not sure), and it’s definitely almost the Firestorm, if you worship Satan.  But it’s definitely that time of year where you spend your hard earned money on carefully thought-out presents for all of your family, and maybe get a fruit basket in return.  And a week from today, the criminally insane will converge on local big box stores to beat the shit out of each other to get a crappy DVD player made by slave labor in China out of toxic plastic, that will work for roughly 37 minutes before exploding.

So, you looking for some gifts that aren’t made by children in sweatshops that might actually promote an artist and maybe make a person think?  How about some books?  Here’s my list of books I’ve read lately that aren’t big-6 published, written by people without a massive marketing budget:

I’m sure I forgot a few others, but check these out – thanks!

One reply on “Your Holiday Shopping List, Should You Choose To Accept It”

Honored to be included with such wonderful writers!