My wife’s sister had twins in February, and they live in Davis, so we’ve been making visits to help them deal with the onslaught of human shit invading their house on an hourly basis. She’s going to have to start dressing them in different colors or something, because I can’t tell them apart, which probably makes me a horrible person.  Both parents are English professors, and they are surrounded by a dozen PhDs at any given time, so I am the only person who can explain to these two what the designated hitter rule is and why it’s a travesty, which I have.  You gotta start young.

(There’s not actually a lot to worry about, since the closest AL team to Davis is the Oakland A’s, and by the time these two are little league-aged, the As will probably have moved to Portland or Las Vegas or Puerto Rico or wherever someone writes them the biggest check, and good for them for getting out of that horrible stadium.)

So I am going to London and then to Germany next month.  I have done zero planning for both trips, aside from buying the relevant book for each.  What should I see?  What should I do?  What should I eat?  All I know is I will probably be doing a hell of a lot of walking, and I plan to take as many pictures as possible.  The flights will be a bitch – for both of the overnights, I am in the middle of one of those six-person rows in a 777, which probably means I will have two morbidly obese people having total flesh-to-flesh contact with me as they ooze out of their tiny coach seats.  I am very excited to take my DSLR camera over there.  I’ve never been to London at all; I’ve never been to Nuremberg, but have been to Berlin.  But Berlin was in 2006, and I’m sure the entire thing has changed since then.  Anyway, suggestions welcome.

I am also going back to New York in June for a brief work thing, which will be interesting.  The work part is good, but I just find myself with some odd nostalgia for the place, which will of course dissipate the first time I get pissed on in a subway car or have to deal with a cab driver or take a nice whiff of the garbage and dead fish aroma.  But yeah, it is weird for me to think about some random year, like 2002, and think about the time I spent in that Astoria apartment, or hiking to the subway, or sitting at my old desk, hacking away at FrameMaker docs while finding ways of covertly getting my coworkers to open up sodomy images unsuspectingly.  (Pro tip: create a Windows CD-R with an autorun that opens up goatse and then write “Half-Life beta” on it.)

In my mind, New York has this small, tangible quality to it, as I only remember the bits and pieces surrounding a narrow view of the past.  Like I think of Times Square and Penn Station, and how you could walk from one to the other in a few minutes, and in my mind, it’s almost the same as the walk from my front door to my parking spot.  But in reality, two and a half million people are between those two points, a densely packed chunk of an island with dozens of levels and layers of subways and trains and streets and sidewalks and offices and lofts and apartments, with wall-to-wall tiny stores and bodegas and locksmiths and cell phone stores and landmarks and all of that seems to fall from my mind.  I remember the last time I went to Manhattan, I stepped outside at night on Fifth Avenue, and at an hour when everyone should have been asleep or parked in front of their TVs, there were more people criss-crossing and walking than four minutes after the last out at a World Series game.  The height of the buildings and the bustle of the crowd and the noise of the car alarms and taxis laying on their horns overwhelmed me.  When I lived there, and in my memories, I turned all of that off, buried myself in my headphones and walked fast from point to point.  But when you’re in the middle of it… oh, man.  I do miss that, although I just want a small taste, and probably couldn’t hack a week there, let alone any long period of time.  How did I survive eight years there?

I may have mentioned to some of you that I had a health “thing” which of course was bullshit.  I had what I thought was a bad sinus infection that went on for a few months, and after a couple of rounds of you-just-snorted-anthrax antibiotics, I still had problems.  So I fought with my insurance company for a month and got a CT scan of my head, which revealed… nothing.  So I guess it’s just allergies.  But getting a CT scan of my brain definitely freaked me out, especially because I got a CD of it and have it sitting on my computer now.  And if you look, I do have a cyst in one of my sinuses, which is harmless and something like 40% of us have them, but when I first saw that, I was certain that was my death, a big, fat, c-word getting ready to tap into my brain.  It’s not, and there’s nothing else wrong in the scan, aside from my teeth, which of course contain more metal than a god damned terminator robot.  But still, the week between getting the CD and seeing the doctor was not exactly calming.

The mortality trip is a k-hole that I don’t like to fall down.  Everyone my age has parents that are checking out.  Every one of my aunts and uncles on my dad’s side is either dead or has some kind of cancer, except for my dad, and you don’t need to be a statistician to lose sleep over that one.  But it’s not something I can focus on.  All I can do is write as much as I can write, and try to not eat shit and get some regular exercise.  It’s been nice enough outside that I have started walking again every day.  And I bought a kettle bell, mostly because Joe Rogan won’t shut the fuck up about them on his podcast.  I used to lift free weights, and thought this was similar, but I did the DVD workout the other day, and an hour later, was like “why the fuck is the back of my upper thigh so god damned sore?”

I am continuing work on the next book.  I also have a number of old books that were never released as proper books that I’ve imported into scrivener, and I wonder if I should polish them up and release them.  The current list goes like this:

All of these are “done”, but would require covers, formatting, editing, and names and blurbs.  The big issue is that none of these are part of the big picture plan, the direction I’ve been going with the last couple of books.  And if I had time to work on these, I would work on the next book.  And the big fear is that I will spend weeks and weeks getting this crap done, and it will sell exactly zero copies.  So, tell me if you’d really like to see one of these see the light of day.  For now, they’re all severe writer’s block day alternate projects. 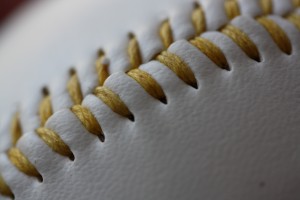 No, literally. I can’t write a thousand words about one thing, unless it’s “hey, remember the Magnavox TV (x1000)”, and everything within the next 18 months will just be a list, so here is a list.

Okay I wanted to write a hundred things, but that’s not happening. 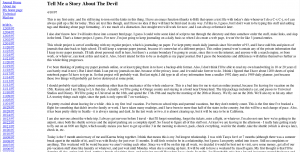 I used to write in these journals, spiral notebooks, every day.  I started doing that in 1993.  I never wrote stories, and it wasn’t a diary either – it was some strange mix of both.  But any writing I did there was trapped forever on paper, unless I transcribed it, which I never did.  So my thought was to move some of this to the electronic world, to create a public web page where I posted some of these entries.

Jorn Barger coined the term “blog” on December 17, 1997.  They didn’t become popular for a few more years.  Livejournal started in 1999; so did blogger.  This diary project of mine was born before anyone knew what the hell a blog was.  I’m certain some other site influenced me to do this, and I didn’t pluck the idea out of thin air, but I don’t remember what I was reading on a daily basis back in 1997.

I did everything in emacs back then: email, book writing, usenet news.  I bugged my friend Bill Perry for some elisp help, and he wrote a little thing that would let me hit a magic key combination and open up an html file with today’s date as the filename.  So I’d hit Control-x Control-j, and the file ~/www/journal/html/041197.html would magically appear.  I then hacked out a C program that I could run and generate an index of all of these pages.  There was no database, no themes, no CMS.  This was five years before wordpress was a gleam in Matt Mullenweg’s eye.  It was rough, but it worked.

So on that Friday, I posted my first entry here.  Back then, this project didn’t have a name.  I called it “the journal” for a while.  It eventually got the name “Tell Me a Story About The Devil”, which has its origins in a Ray Miller story.  The name “The Wrath of Kon” is a more recent change.

I always hated the word “blog”, though.  There was this whole journal or diary movement in the late 90s that everyone has forgotten, and all of a sudden, blogs were “invented” in the early 2000s.  That meant I had a good five or six years of entries, when all of a sudden, everyone and their mother was a “blogger” and started getting book deals and money thrown at them.  So yeah, I was bitter.  But I kept at it.  Now, I don’t give a shit about the term “blog”.  I have bigger fish to fry.

There have been many changes over the years.  My Rube Goldberg mechanism would break on January 1st every year, and I slowly duct taped more functionality to the system, adding a bit of CSS, a comment system, and eventually ditching the entire thing for wordpress.  The page originally lived at speakeasy.org, and moved to rumored.com/journal in 1998.  I eventually dropped the /journal part.  The content also slowly changed, moving from diary entries to stories to news to travel reports and back again.  I never had a solid theme, but I think that prevented me from painting myself in a corner.  I think if I originally would have only blogged about the books I read or a quest to collect every Atari cartridge, this would have died a long time ago.

So.  15 years.  1149 entries.  I think the last time I was able to calculate a word count, it was something like 650,000 words, and Infinite Jest is something like 460,000.  I did a book that collected the first three years, the Seattle entries; I keep thinking about a book that collects some of the best essays of the last dozen years, but I’ve got something on all four burners right now.

Anyway, here’s to fifteen years.  I don’t know many other sites that have been around this long.  I wonder where things will be in 2027.