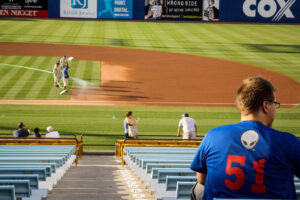 I am fifty-one today.

I’m not sure what to say about this oddball number. After 21, only the big round numbers matter. This is the first post-50 birthday, so I’m now into my quinquagenarian years. I can contribute an extra $6,500 to my 401K. Car insurance is easier to get. Life insurance isn’t. 50 was a giant wall in my mind, but I got to like the age. It’s easy to say “I’m fifty” than it is to say “I’m fifty-one.” I mean, I will probably be saying I’m fifty for the next six months, just like I’m writing 2021 on everything. (Cognitive function is another discussion.)

51 in binary is 110011, which looks neat. It’s a pentagonal number, a Motzkin number, a Perrin number, and a Størmer number, none of which mean anything to me. Other than itself and one, its only divisors are 3 and 17. I don’t believe in numerology, so I don’t know what to say about that. I’ve always favored even-numbered ages and disliked odd ones, for whatever reason. 32 was cool. 44 was cool. 37 seemed dumb. So did 47. So 51 is 51.

The first thing about 51 that pops in my head is Area 51. This is now a touchy subject for me. First, I am completely done with conspiracy theories. The current events of the last five years have made it completely impossible to enjoy reading about UFOs or whatever else. Conspiracy theories have been completely weaponized, and everyone who uses them as currency is A Problem. I have to walk away from that stuff entirely. I’m also trying to reevaluate my relationship with military planes, which is the other big part of Area 51. I’ve had an obsession with them ever since I started putting together plastic models as a kid. But there’s also a plague within the community that makes it difficult to deal with. I like airplanes and drones and technology and stuff, and I can easily fall down a k-hole on stealth bombers or whatever. But the rah-rah stuff is too much for me now. I hate to get political about it, and I don’t know what should replace it, but that’s how I feel.

There was a baseball team called the Las Vegas 51s, but they changed their name to the Aviators when they moved to a new park. I also have zero interest in baseball now. The Rockies’ inept ownership finally broke me, and I could not convert to another new team. The shortened season, new dumb rule changes, and lockout also tarnished things for me. And see also the fan community and politics situation I described above. Without going into it, with the social justice issues of the last few years and the general alignment of the fan base of the sport, I’m not entirely in agreement with things. I still peek in at what’s going on, and if the Oakland A’s manage to build a new stadium near my house (they won’t; they’re moving to Vegas), maybe I’d go to some games. But that’s another thing I’m moving past.

All the usual post-50 thoughts are still in full effect. I need to save as much as possible. I need to pay off this house. I need to look after my health. I’ve lost a ton of weight this year, and I need to keep that off. I also need to think about my brain and what else I want to do. I’ve been taking photography classes. Taking a ton of pictures. This would be a great time to do more travel, except it totally isn’t. So I need to work on all of that.

Most googling on the age of 51 is stuff about how that is the average age of menopause in American woman. No problems there. I am losing the war of male-pattern baldness, but haven’t fully committed to buzzing everything away. I’m not running out to get hair plugs either. I guess a side benefit of not leaving the house for two years is I haven’t had to make a decision on that one.

I’ve now survived longer than many notable people: Rod Serling, Raymond Carver, Steve McQueen, Michael Jackson, Bernie Mac, Dee Dee Ramone. I guess the very good news is I didn’t have a gripper up until now. But the other edge of that blade is I haven’t exactly reinvented the American short story or the anthology television series in my years on this planet. I sometimes think too much about what I have and haven’t done, and I can’t waste any time on that today.

The only weird thing that 51 made pop into my head is that I’m exactly three times older than I was when I was 17, and that nostalgia problem I described last year makes me think too much about when I was a teenager, in my junior year of high school, in 1988. That’s another rabbit hole I want to avoid, but it’s on my mind.

I have not updated in forever, and there’s lots to update about, but I should do that outside the context of this little birthday post, which I’m mostly doing it so I can find it later with the rest of my other birthday updates.

Anyway, day off. Time to go walk a mall, maybe take some pictures.