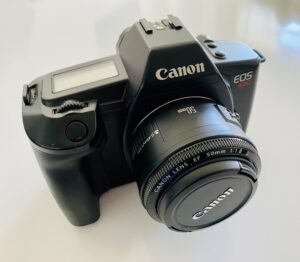 Because apparently I don’t have enough film cameras in the house, I got another one recently: the Canon EOS 620.

Film isn’t cheap right now, and some cameras are getting ridiculous. The Canonet QL17 rangefinder I bought in 2014, probably one of my best film cameras, costs roughly three times as much on the open market now. An Olympus XA2 you couldn’t give away for $20 back in the early 00s when digital hit could easily fetch $150 or more on the bay. Don’t even think about a used Leica.

But there’s a weird bubble at the end of the film era, where nobody wants those cameras. And that’s really interesting to me. I never had an SLR in college. Always wanted one, but wasn’t serious enough to drop the equivalent of a semester of tuition on a full kit. I could barely afford the hundred-dollar point-and-shoot Vivitar I bought in 1993. Now, these end-of-film-era cameras are going for cheap prices, maybe because they’re so similar to their digital counterparts.

Canon came out with the EOS 650 in 1987. (The EOS 620 came out a few months later, and added a faster shutter and some other minor improvements, despite the smaller model number.) The EOS was essentially a blank-slate start to an SLR, turning its back on the manual FD lens platform, and doing everything right the first time. Nikon was the choice of pros back then, and couldn’t turn their back on professionals who had massive investments in their existing lens system. Canon rolled the dice on this, and it was a good call.

The EOS 650 is built around the EF lens. EF stands for “Electro-Focus” and it’s an autofocus lens with no central mechanics in the camera itself. On previous systems, little gears levers or mechanical plungers were used between lenses and the body, so motors and other guts were kept in the camera itself. With an EF lens, there are seven little electrical contacts, and it’s all fly-by-wire. The lens contains any motors or electronics it needs to work. This was science fiction in 1987.

(Fun trivia: the very first image ever posted to the World Wide Web was taken with an EOS 650 and then scanned to a file. I’m not going to link to a Gizmodo story, but look it up.)

The EOS 650 (and 620) is also noteworthy because every EOS camera after it is based on the same essential design. I have the 620 and an EOS 750D sitting next to each other on my desk. The 620 is almost 30 years older, and the latter is a 24-megapixel digital camera that shoots video and has a fold-out screen. But there’s something in the basic design language that’s incredibly familiar with the two. Buttons are in the same place; the right grip feels similar; they both have a display on the upper right. The view through the viewfinder, the green aperture/shutter speed display below the image, looks almost identical. Obviously, one’s got no fold-out LCD screen and a little window that shows if the film is loaded, but they are very much from the same lineage.

(A less than minor nit: now that everyone’s going mirrorless, Canon’s introduced a new lens type called the RF. Mirrorless cameras with the RF mount can buy an optional adaptor and use their EF and EF-S lenses, but you can’t do the opposite. And there aren’t that many RF lenses yet. Also, this is the second time Canon’s tried this stunt. I have their older EOS-M, which used EF-M lenses, or an EF/EF-S adaptor. I’m not about to buy into this new system and have them change their mind a third time.)

Anyway, the EOS 620 is a strange shooting experience, because in many ways, it’s a normal shooting experience. It’s got a decent fast autofocus; a nice light meter; similar shooting modes and metering and exposure modes and all the usual stuff. Set it to P and shoot just like you would with a Canon Rebel. Swap to Tv or Av, same deal. Or shut off everything and go full manual. The one difference you’ll notice is the satisfying ca-chunk when you hit the shutter. It feels like a “real” camera.

There are some other advanced features I’d never expected in a film camera. The film loading is auto-everything, completely motorized. I guess my Vivitar point-shoot does this, but you drop in a cartridge, close the back, and it sucks in the film and tells you the frame number on the top. It’s fully motorized and fast (for the time), so you can set it on auto, hold down the shutter, and burn through three frames a second, much faster than simply lighting twenty-dollar bills on fire. And I never realized there were film cameras that did exposure bracketing, but if you want to shoot over/at/under a given exposure, set it to AEB and eat film three times as fast.

I think one thing that’s missing is there’s not any mystique or difference in the shooting experience versus using a modern DSLR. With a quirky camera like my Olympus Trip 35 or some vintage Polaroid, it’s so different from the typical experience, it’s like going from a Toyota Corolla to a Model T Ford with no roof. The 620 is like going from a 2015 Corolla to a 1995 Corolla. But try hand-cranking a Model T a few times, and you’ll see why a Corolla has its advantages. This won’t have any vintage vignetting or lens distortion like my toy cameras, but it will be nice to have something full-auto with no film loading drama involved.

Anyway, ran through a roll already, but let me do a few more and then get them off to the lab and see how it goes.

Related news: Kodak’s upping their film price by 25% in 2022. I’ve already started hoarding; I think I picked up 20 rolls since I heard that news.