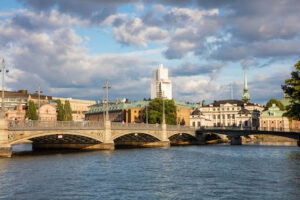 Labor day. A day off. As always, I haven’t updated here in forever, and a lot has been up. It’s good to have a Monday off to get caught up on things, so here we go.

It is unbearably hot this weekend. I think inland east in Pleasanton and Concord, it’s supposed to be like 110 this afternoon. It’s 93 here, and we have no AC. I have all the windows closed and drapes shut right now, and will open them as the sun sets. This generally keeps it cool, but I expect tonight to be unbearable.

OK, so, Sweden. I was in Stockholm last month. I was going to write a big thing about it, but I lost momentum, and then I ran out of time. I was anxious to pick up travel again, and haven’t been to Europe since 2016, so I threw a dart at the map (actually, looked at places with direct flights) and ended up on Sweden. I don’t know anybody there, except for maybe random Death Metal people I met once in 1993 or whatever. Didn’t know what to do, didn’t have time to make any plans, and just booked the whole thing on Expedia, forgot all about it, and next thing you know, I’m on a 13-hour flight to Scandinavia.

The trip was… weird. Stockholm is a beautiful city. I loved the bullet train from Arlada airport to downtown: 125 miles an hour and so clean, you could perform surgery on the floor. The whole city was spotless, and the architecture was a perfect mixture of a 16th-century city that had never seen war, mixed with the ultra-modern development of a thriving economy. Every subway station was a work of art. I think I had four bars of 5G at all times. I went to the Westfield mall, the biggest in Sweden. 224 stores, no vacancies. Everything about Stockholm was ultra-modern and progressive and advanced and almost surreal.

But… it didn’t click for me. I think part of it is that the people were a bit standoffish. They weren’t impolite, but they weren’t entirely inviting. I guess this is a thing? Also, I’d always heard that everyone in Sweden spoke English. They do, but by default, everyone spoke Swedish to me. I do not know one word of Swedish. Maybe I looked like a native, or because I was traveling alone and not in a pack, they assumed I wasn’t a tourist. I don’t mean to go on a rant about how people in other countries don’t speak English; I get it, and it would be stupid to think otherwise. I guess my experience in places like Germany or the Netherlands is that the switch from the other language to English was more fluid, or maybe the tourism was more English-oriented. And for me to be in a place where I can’t go to a record store or a camera shop and chat, or crack a joke to a waiter, it made the whole thing feel somewhat isolating.

I quickly ran out of things to do. There are a lot of museums, but I can only look at so many 600-year-old swords, and I’m not terribly into Vikings. I walked a lot every day, but I also found that I should have planned a train trip out of town to go walk in nature. You can easily walk for ten miles and still be in what looks like downtown. Went to lots of stores, bought some records even though I don’t have a record player, and I tried some of the native food at an old-school restaurant that had antlers hanging from the ceiling and looked like a ski lodge. Reindeer meatballs and lingonberries, along with a Swedish cake that put me in a coma. Cool, but two nights later, I’m at Pizza Hut. I am the Ugly American.

I don’t remember if I mentioned it in the Denver trip, but these solo trips are really getting to me. I mean, unless I have a really solid list of things to do, I tend to drift off into depression and loneliness, and it’s never good. Add to that not speaking more than ten words all week, and this one got pretty dire. Also add to that the jet lag situation. Normally, I’m chatting with people all day on messenger and reading posts online, but I was waking up just as people were falling asleep, and my day was the dead part of the news/doom-scroll cycle when no updates were happening. The trip made me realize how dependent I am on social media and chats to stay sane on a daily basis, and I sure didn’t in Sweden.

I posted a few pictures here and there, but the trip was a bit of a bust, photo-wise. I brought that Canon 5DS, and fought with it the entire week. First of all, Sweden is at a high latitude, so the light was just weird. It felt like there was maybe five minutes surrounding noon where light was directly overhead, but otherwise I was caught with harsh shadows from either side. (Or maybe I don’t know what I’m doing, which is very likely.) But like Denver, I had a lot of trouble getting clear shots with the high-megapixel 5DS. And it’s a beast of a camera to lug around all day. I think part of it is that lens has such poor dynamic range, and it really brings out any imperfections in lenses. Even that EF 24–70 f/2.8L II I have (also heavy) is pretty iffy on that camera, and it’s not image-stabilized. Locked down on a tripod taking pictures of a building, the 5DS is a great camera. On the go, I was finding my metering was just off and I was getting too many blurry shots. I also had an EOS M1 mirrorless with me, but I’ve been saying for almost a decade how bad that camera is. Most of my best shots were with the iPhone.

Short story long, the 5DS went back to KEH, and I got a 6D Mark ii. It’s a bit lighter, a bit smaller, but just a more well-rounded camera. It’s got half the pixels, but seven times the ISO performance. It has more creature comforts like a folding touchscreen, a built-in GPS, and all the bluetooth/wifi stuff I will never use. I still need to figure out my lens situation, but the few times I’ve taken out the camera, it’s been decent. I went out to the former NAS Alameda this morning at about nine to walk early before the heat got bad, did a quick lap, and shot a few hundred shots. I think it will work much better next vacation.

I also shot half a roll of film on my old Vivitar point/shoot today. I need to shoot more film. I just checked, and between my freezer and my closet, I have fifty rolls of 35mm, and a dozen more of Polaroid, and a dozen rolls of 120. Film’s hard because I can’t take it on a plane, unless I want to deal with TSA hand-checking stuff, and there’s not enough deodorant for that conversation. At some point I will have to go hike somewhere nearby and blow through some of the stockpile, but most days, I want to go digital.

Still motoring away on school. I actually finished my ethical leadership class while I was in Sweden. On day 100, I passed my financial management test, which was my worst class so far. Lots of math, lots of terms to memorize, but it’s done. I have this quant analysis class I’m about a third done with, then econ, and then the big final project. The goal was to finish by Thanksgiving, and I might be slightly ahead of that, but we’ll see.