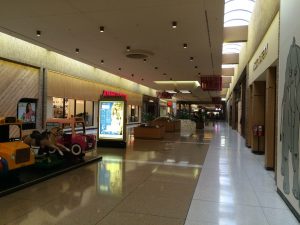 Almost two years ago, I wrote a long eulogy for the mall of my childhood: Death of the Concord Mall. This was after I heard of plans of the de-malling of the forty-something shopping center. Well, plans have changed. Here’s an update.

First, since I last wrote about this, more stores obviously closed. The christian book store that was there was part of a national chain that went under. The bizarro book store that took over the old Walden’s books folded. A BoRics hair place that still had the old logo on the sign has vanished. I haven’t kept track of whatever else, but today, just for kicks, I went to the mall web site and tallied up their directory list. (It’s a bit deceptive, because they list stores by category, and then list the same stores in multiple categories, to sort of hide that nothing is left.) Anyway, a 2015 planning document showed 62 total spaces and nine kiosks. The current tally is 29 total tenants (including kiosks). That includes a few dubious spots, like the “conference center” that’s really an abandoned jewelry store. And that includes the various half-baked stores, like the place that’s just a bouncy castle indoors.

Also, one of the anchors, a Carson’s store, is about to close. This store was originally a Robertson’s, which was a local department store chain. Back before my time, they had a sprawling multi-floor old-school department store in downtown South Bend, the kind with a beauty salon and a tea room on one floor, a place where people would register their china pattern before their wedding. Then they moved to the malls, and scaled back a bit. The store was bought during the mid/late 80s mall expansion bubble, and it changed to a Meis store. I never shopped there — I wasn’t wearing Izod shirts and sweaters — but I do remember they had an electronics department with gray-market Japanese gear, like Sony Walkman tape players much smaller than the ones normally sold in the US. They got bought again, and around the time I left Indiana in 1995, they became Elder-Beerman. They got bought by the Bon-Ton corporation in 2003, and renamed to Carson’s at some point. And shortly, they will be gone.

One odd memory of that store: it is probably one of the first times I was ever on an escalator. In contrast to the rest of the single-story mall, it has a voluminous first floor, with a second floor far above it, and a set of massive escalators connecting the two. Most of my childhood was in single-story buildings and malls and stores, and I can’t think of a single place where I would have encountered an escalator other than that store. So that’s weird.

Next up, that big fifty-million dollar project to demolish the mall and drop in a bunch of freestanding stores that was supposed to happen in 2017? Well, it didn’t. It never got further than a bunch of renderings and some “coming soon” signs at the mall. No tenants got on board, and no financing happened. They did move the old Martin’s supermarket to a new building just over from the old one, and started rehabbing the old building to move the JoAnn Fabrics there. But nothing else happened.

And now, the big news is that the mall is in receivership. The owners have stopped making payments on their bank loan, haven’t paid property taxes, and there are multiple liens on the property, meaning they probably aren’t paying bills. Jones Long Lasalle is the new receiver, and will continue running the mall for the time being. (Oddly enough, they also were the receiver at my local deadmall, Hilltop.) The bank has asked to foreclose on the property, which means it will likely go up for a sheriff’s sale. This happened at Erskine Village, the old de-malled Scottsdale Mall in South Bend, in 2016. It was bought back by the bank, and I have no idea what happened to it, except it’s still running. But it’s just a Target and a bunch of other random stores spread across a parking lot.

I have a feeling not much will happen with Concord. They won’t be able to attract new tenants; there are Walmarts and a Target nearby, and any possible stores are either in nearby strip mall shopping centers, or wouldn’t pull enough customers to be viable. Nobody will be able to fill the old Carson’s store. The JCPenney can’t be too far behind. The only other national chains in the mall are Claire’s (which is going bankrupt), GNC (which is about to go bankrupt), Champs, Spencer’s, and Kay Jewelry. (All three seem to go down with the ship in a dead mall.) There’s still Hobby Lobby, which is going strong. (Except on Sunday, because, Jesus.) My guess is that each store’s lease will time out, and they’ll board things up and let it sit for a decade, until they eventually tear it down. I’m sure the Hobby Lobby will be decoupled and live on. But what else can they do?

It’s so sad to me, because I spent so much time there as a kid, and have such vivid memories of the place. When I look at pictures of it now, the decor inside is exactly the same as when I worked there in 1993, when I was unloading trucks at the Wards store at six every morning. We’d work for four hours, and then I’d go out into the just-opened mall to grab a drink, and it would always be empty, just the mall walkers and the day shift of store managers getting their day started. This strange calm would be there, a vacancy, an odd quiet, when nobody was there. It contrasted so much with the hellish rushes we had at nights, on holidays, going into the holiday season. In those boom times, I would work twelve-hour shifts, long lines of people for the entire twelve hours, everyone on their late Eighties Greed-is-Good kick, maxing out their plastic to live the Reagan era of excess. And then when I was there in the day, in those early hours, there was so much tranquility and quiet, just hearing the sound of the central fountain echoing through the halls. It was so magical, yet so out of place. And now, when I go to these malls, it’s like that same feeling of calm, except all the potential is gone, all the shoppers have vanished, and all the stores are abandoned. For me, it’s like the quiet of a battlefield long after a war. It’s eerie, and it’s sad.

I have a lot of problems with nostalgia, and with memories, and with looking back. I think it becomes more painful as things like this vanish. I don’t want to go back; I never would want to live there again. But it still bothers me. I can’t explain it, but I can’t get past it.

Anyway, we’ll see what happens here, but it probably won’t be good. 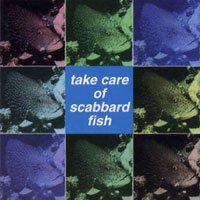 This entry is a bit of a placeholder, in hopes that somebody will find it in a google search and maybe chip in more information. It’s very odd that searching on “Take Care of Scabbard Fish” brings up almost no results. Even more weird that it doesn’t come up on sites like discogs or allmusic.

A general description would be that this stuff is Japanese noise/rock from the mid-90s. Lots of feedback, lots of jangly guitar, some stuff bordering on surf rock. But not a lot of it is noise-noise, like beatless, screeching, experimental noise; a lot of it has a heavy groove to it, like basement alt-rock without commercial goals. It’s good stuff.

I haven’t googled through all the band names or songs, although a lot of these seem like dead ends. (How many bands named Romeo are out there?) I don’t have a physical copy of the album, but accidentally found the MP3s on a deep-dive for something else. (Of course, I immediately deleted them and called the police, because piracy is wrong.)

Anyone else have any info on this?