Everyone else on various gadget and tech sites has been doing this lately, so I thought I would, too.  Here’s a picture and explanation of every item I carry in my pockets on a daily basis: 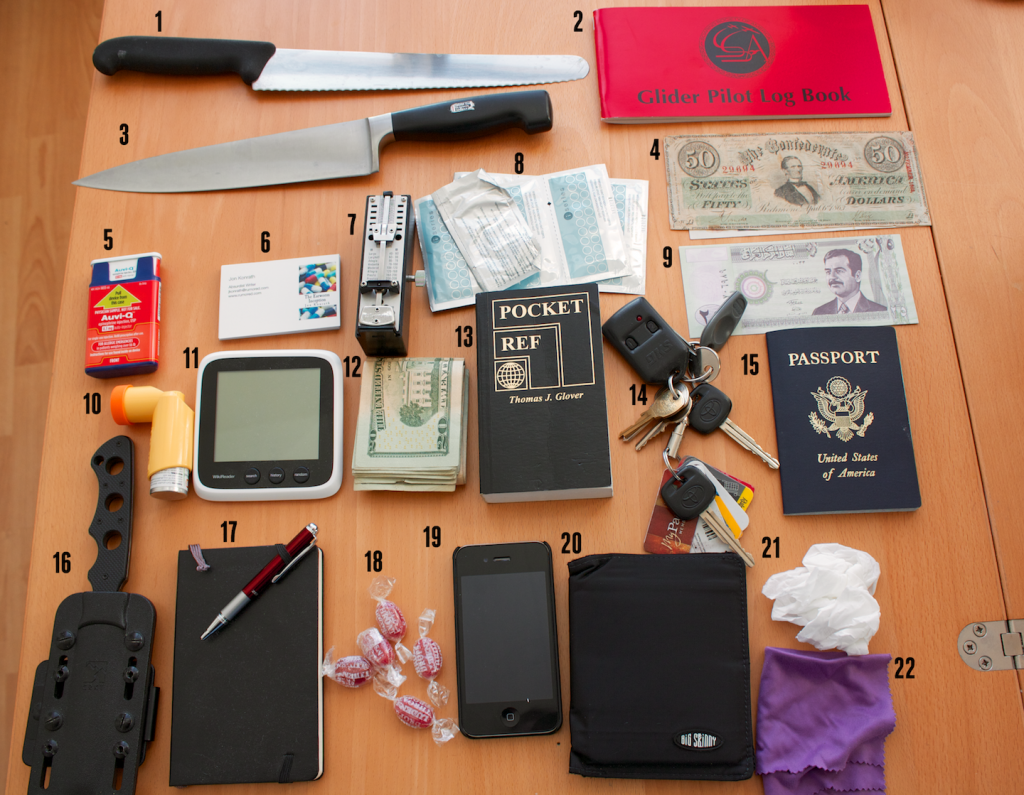 I stumbled into the pizza place on crutches, my inflamed foot wrapped in Scooby-Doo bandages and padded lawn chair webbing tape.  One of my crutch-arms clung to a plastic pharmacy bag filled with high-tech bandages and gauze that the fuckers in the ER tried to sell me at a ten thousand percent markup.  Didn’t they hang people for price-gouging like this in the Old West?  Not to get all Andy Rooney, but sometimes the old way works best.

But first, before redressing the wounded foot, I needed food. The doctor told me to eat something before taking the painkillers. He also gave me a determined boilerplate speech on why I should become a vegan, but fuck that.  The closest place that had any vegetables other than iceberg lettuce would involve another hour of stumbling med-free on uneven sidewalks with zero crutch proficiency, and life is too short.

A cross-eyed mongoloid of a brute threw a fifty-pound blob of dough against the counter like Andre the Giant going for a pin against a pencil-necked geek after drinking two cases of beer.  I stumbled to the cash register and ordered the three-slice special. He punched the register keys with flour-encrusted fingers, then handed over my free can of warm Coke and one of those green-and-white tickets used by every restaurant in the tri-state area.

I sat in a booth by the warped-glass front window, popped open the 30 tablets of salvation, courtesy of the idiots at Rite-Aid, and hoped they hadn’t skimmed any of the Vicodin for themselves.  I needed food, sleep, and a new immunosuppressive system, or whatever caused this horror arthritis in my red swelled toes.  Someone said drinking raw cherry juice did the trick, but the internet’s full of idiots.  CowboyBob79’s insane wife is going to tell everyone on Yahoo Answers that shoving avocado pits in your asshole cures cancer, but I wouldn’t want to try it.

This was the weekend that someone published the location of the secret government warehouse on Drudge Report, and thousands of people smashed down the doors and rushed the place like it was a Wal-Mart black friday sale on Larry the Cable Guy box sets.  People ran through the streets with stolen 200-MPG carburetors, parts of alien spaceships, Elvis cloning material, and check stubs and cancelled receipts for the Kennedy assassinations.  eBay servers melted down with all of the people selling off Arks of the Covenant and cattle mutilation equipment.  I spent the next month watching old X-Files episodes to corroborate story lines with all of the new black ops evidence available on the secondary market.

A guy wearing a Millions of Dead Cops shirt and a Vietcong hat sat in the booth next to me, trying to start a conversation with random factoids of nothingness. “John Wayne died with 87 pounds of hamburger in his butthole,” he said, clicking on some iPad game mindlessly, one of those things where cartoon ninjas or zombies or badgers fought and fucked fruit or birds or something.  “Look it up online.  87 pounds, dude, straight up the shit-shooter.  ‘Is that you, John Wayne?  It’s me, cholesterol apocalypse.’”

“I think the rumor was in his colon, not asshole.  You remove a lung, and you’d be surprised how much shit you can impact in there.”

“Colon, butthole, beef, fudge, whatever.  And his first name was Marion.  Dude was gayer than a Glee marathon in the men’s room at a Pinkberry.”

Where the hell is my pizza? I thought.  I needed food, needed my fix.  The intense pain of my foot was even worse than this conversation.

I recently sat down with Joseph Michael Owens for an interview for The Lit Pub, although we didn’t actually “sit” – we actually went back and forth in a Google Docs buffer, and ended up with one of my longest interviews ever.  It was a lot of fun, and besides talking about my newest book Thunderbird and my other writing, we wandered off to topics like Hunter Thompson, human cannibalism, nuclear missile silos, Louie CK, and a million other things.

Anyway, go check out the interview over at The Lit Pub: http://thelitpub.com/jon-konrath-interview-extravaganza/