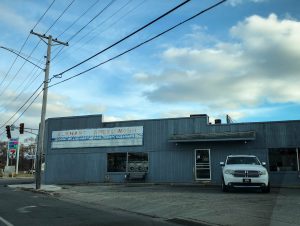 I’ve been back from Indiana for a while, but I’ve been thinking about something I can’t exactly shake, something I saw during my drives around old stomping grounds. This was further drilled into my head when my pal John Sheppard came out to Michiana for a day-long Konrath Reality Tour leading all through Elkhart, Mishawaka, and South Bend. As we drove around, and I pointed where things were, what used to be something else, I noticed a common theme: holes.

It was disheartening and depressing comparing the geography of my childhood in my mind to the current landscape and what still remained. For example, the area of Dunlap that was once the main drag when I was in high school is largely bulldozed and gone. The two-mile strip of US-33 from maybe CR-13 to Hively has lost a majority of its businesses. I’ve already covered Concord Mall a million times, but there’s that. Then there’s my old Taco Bell, sitting abandoned for years; the Arby’s next to it is a vacant lot; the tile place on the other side was torn down by the city because it was blighted. The Astrobowl bowling alley is leveled; the Shakey’s pizza is leveled. The Aldi’s grocery store was abandoned, then was briefly a Guatemalan fruit stand, but is now abandoned. The place next to it was I think a Goodwill; abandoned. Optical store, empty. Bank, empty. Martin’s grocery store, they started rehabbing it, hit asbestos and a leaky roof, and abandoned it half torn apart. Movie theater, abandoned. There’s a small strip mall that had a band instrument place and a furniture store; half the slots are empty, and it has a gold and pawn and a tattoo place. A long, long stretch of this highway was eminent domained to put in a US-20 bypass exit, and is eerily vacant, never redeveloped. This is all within two miles, and there are a lot of other parts of the city also pock-marked with similar holes.

I don’t want to get into a political argument about the wage situation or how Elkhart is being made great again by wage-labor jobs that will all vanish when gas hits four bucks a gallon again. That’s not the point; the point is, it seems like a lot of retail landmarks have vanished, and haven’t been replaced by anything. Some of this is because of Amazon, I’m sure. Some of it is Walmart killing off mom-and-pops. Same with big venture cap hostile takeovers to pick the old retail giants clean of any value and leave them for dead. (I’m talking about you, Sears.) Some of it is that the remaining nationals and regionals have moved to other locations, like the swath of businesses south of Elkhart, or the constant growth in Mishawaka and South Bend. There’s also the possible case that the area was just massively overdeveloped when I was a kid. In the pre-Reagan years, a good investment was developing real estate like malls and using accelerated depreciation to reap a greater tax deduction. (See also.) Elkhart may not have been a city big enough to support two malls, a vibrant downtown, and the suburban Dunlap retail corridor, all of which are gone now. (The two Walmarts are doing okay, though.)

Other reasons: a lot of gas stations of my youth are gone, scraped bare and vacant. That’s probably rusty underground tanks that were easier to abandon than clean up. A lot of these have also become used car lots, the u-work/u-drive type that quickly flip auction sale cars at predatory interest rates. But if it can’t become a car lot (or a church – lots of those there) it becomes a vacant lot. The same environmental issues are also an issue for rehabbing old architecture for new use. The Martin’s grocery store I mentioned is a prime example, and one that has happened many times. Asbestos, perpetually leaking roofs, piss-poor insulation and bad HVAC (try heating 100K square feet when it’s 45 below zero out, like this week), sinking and broken foundations that were laid on the cheap back during the construction boom. and just bad configuration and layout which would require more than just a full gut.

There’s also the “white flight donut” going on. In the Seventies, everyone left the inner city for the suburbs, where subdivisions were hastily built from plowed-up cornfields. (That’s where I spent my childhood.) When those quickly-assembled houses fell apart twenty or thirty years later and their owners retired, they moved further out into the country. In some American cities, when this happens, you get the “donut” effect, when the core downtown is gentrified by yuppies. (See also Chicago, or even Goshen.) This hasn’t happened in Elkhart, but the suburbs that were created when I was a kid aren’t as active as they used to be.

I recently read the book Obsolescence: An Architectural History by Daniel M. Abramson. It brought up this concept that I never really thought about, and is contrary to most of the old retail/dead mall/preservationist thought I see on various blogs. The thesis was that architecture has planned obsoleteness, just like that three-year-old phone of yours that won’t keep a charge anymore. There is an idea that a building or a house is built for forever, that it is a landmark that will last an eternity. But historically, starting in the Sixties, architects moved to a frame of thought that buildings had a shelf life. It was cheaper to make something that only lasted thirty years, and this also fit into the general tax code, as I mentioned above. But also, if you designed something trendy in 1961, it would be played out in 1991, and you’d level it and start over.

There’s two sides to this school of thought, and I’m sure this horrifies some people. Just the idea that something would be destroyed after one paid so much, both in money and ecological impact, would seem disturbing to some. But it’s something I think about a lot when I see these buildings that basically implode and vanish. There’s no money in rehabbing these buildings, replacing them with vibrant businesses. It’s more economically viable to leave them blighted. It’s a real paradigm change to think of housing and property to be a temporary investment, an expendable purchase, instead of something you buy forever. Most people can’t deal with the mental concept that a purchase like a phone or a car isn’t designed to last forever, so this school of thought is beyond them.

I guess the thing that’s sad to me is that it’s one thing to think that buildings become obsolete and should be replaced when their time is up. I see a lot of that here in Northern California, but here the movement is upward. Single-story houses are replaced by townhouses; single-floor stores are replaced by shopping centers. Old corporate headquarters buildings are torn down and replaced with modern ones that are several times the size. (See also my old office.) But the value of land here is so high, it’s a no-brainer, aside from the nostalgic component, to scrape an old building and replace it with a higher-grossing structure that can do more, hold more, make more money.

In Elkhart… that isn’t happening. Houses don’t get scraped like they do in Palo Alto. Commercial development doesn’t seem to be over the top. Maybe factories are expanding, but the retail corridors look vacant or underutilized. Like I said, there are probably numbers to counter that, but from what I saw, it was depressing. It makes me wonder what will still remain if I visit again in another ten or twenty years.