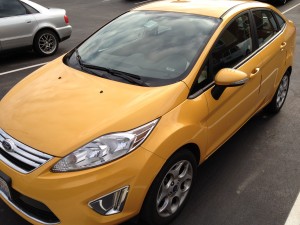 I don’t go home much anymore.  I don’t even know where ‘home’ is; I’ve spent more time out of Indiana than I lived there.  Home is probably where the mortgage is, and Elkhart is nothing but a distant memory.  And when I go there, that’s what always gets me: the nostalgia, the distant memories of the time I spent in that little town, when it was my entire world, and the coasts and cities and states outside of the 46516 were nothing but fictional entities on a TV screen.

This trip was particularly hard, for some reason.  I’ve been trying to foster stronger friendships with old friends and family, because I feel like my life’s been on autopilot, and if I don’t put in the effort to see people, it’s suddenly twenty years later and they are all strangers to me.  But when I went back, it seemed like everyone was in some kind of crisis or despair. Everyone’s getting older; everything’s falling apart.  People are unemployed and underemployed and oversubscribed and overextended.  Nobody’s happy.  Everyone’s unable to move, and tells me I’m lucky I escaped.  And I did escape; I do have a job.  I’m mostly healthy, I’ve got a house and a wife and two cars in the garage and food in the fridge and cash in the bank.  But that doesn’t make me happy.  I’ve struggled a lot in the last year or two with what I should be doing, the big picture stuff, and I haven’t always been happy with the results.  So it makes me uncomfortable when others look to me as a person who’s “made it”, and I have no business telling them what they need to do to get out of their own rut.

When I do return to Indiana, I find it amazing that I drive places without even thinking about directions or maps or GPSes.  I think about going somewhere, a mall or store, and find myself driving there on autopilot.  I drove a lot of my old routes: the IUSB to Elkhart path I took every day for year; the River Manor to Concord Mall trip I drove a million times in the 80s and 90s; the south-bound US-31 jump across the middle of the state to Indianapolis to Bloomington I drove every holiday I came back from school.  As a whole, the state’s in sad shape.  So many businesses are closed, homes foreclosed, factories shut down, strip malls empty, old malls bulldozed.  Roads are potholed and unkempt.  Of course, every other abandoned movie theater or grocery store has become some kind of evangelical church, and those continue to thrive.  But I felt such an overwhelming sadness driving those same old routes and seeing total devastation.

I went to my old hangout, the Concord Mall, to see how it was doing.  I spent my childhood going to this four-spoked shopping center, walking the concourses and buying toys and records and books.  I later worked there, at Montgomery Ward, mixing paint and selling lawn mowers and Christmas trees.  Concord Mall has been utterly decimated.  I went a couple of days before Christmas, and I’ve seen more people in the mall back in the Eighties two hours before opening.  My old Wards store died ten years ago, and has been split into pieces, now a hobby shop for scrapbookers and packrats, a discount appliance store, and a family dentist.  Most of the stores are now gone; the Osco drug where I used to spend hours at the newsstand reading magazines got turned into a food court; every single stall is currently shuttered except for a Subway.  The Walden books where I got every book that influenced my writing as a teen is now a bizarro used book store with old, beaten religion books.  The MCL cafeteria Ray dragged me to almost every week is boarded shut.  Both record stores are gone.  The only surviving store was the GNC where my first girlfriend worked.  I think it does brisk business in energy drinks and herbal stimulants for the few remaining factory workers. 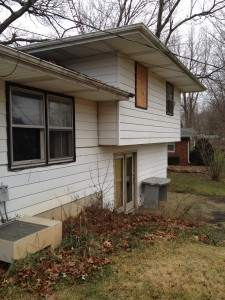 I went to my old house in River Manor, which was absolutely heartbreaking.  It was foreclosed upon a couple of months ago, and was devastated.  The big TV antenna tower was bent at a 30 degree angle and falling over, and the roof was covered with a blue tarp, probably with some kind of wind or storm damage.  Several of the windows were broken and boarded over; the screen door was ripped off of the front, and the patio door in the back was broken and boarded shut.  The grass died; trees were missing or dead and the landscaping was entirely fucked.  Doors and windows were secured with impromptu padlocks and riddled with legal postings from sheriffs and maintenance services.  I looked in the windows, while trying to remember any of my old teenaged egress methods that could have been used to gain entry, and the inside was filled with garbage, old boxes and trash, and storm damage.

I have no love for Elkhart, and absolutely no desire to return.  But part of me wished some REO website had the house listed for ten grand, just so I could either restore it (which would probably cost more than the hundred grand it’s “worth”) or bulldoze it and put it out of its misery.  I walked the perimeter and thought of a million memories, all of the hot summer afternoons I paced every step of the lawn with a mower; all of the times me and my sisters set up our kiddie pool or played with the dog or built snow forts in the winter.  I thought about the year I returned in college and lived in the basement, stuck between a life of return and escape.  I went to all of the places in the yard where we buried childhood pets, under trees that were no longer there.  I spent a decade and a half calling this white tri-level home, and now it looked like one of the abandoned buildings outside of Chernobyl.  The entire visit completely gutted me.

One of the mixed positives about the trip was going to University Park Mall.  We first went on a Sunday night, at about 9:00, and the place was absolutely packed.  The mall looks like it has doubled in size, not even including all of the outlying big box stores that appeared on the perimeter.  I walked the concourse, and examined all of the stores, which have been replaced with more upscale items.  The place even has an Apple store now, which amazed me.  When I was a teenager and first got a license, I made the pilgrimage to this mall whenever I could, going with Tom Sample just to dig through the import records at Camelot and maybe see girls that didn’t go to our high school.  Almost every single store has changed, but the hallways are still the same, and I took a few laps, just looking for any reminder of my past, something that hadn’t changed.

I thought a lot about what would have happened if I never left Indiana, if I graduated from IUSB and got some middle management job at a bank or insurance company and stayed behind.  I think I would have descended into this world of retail therapy, buying a house with a giant basement and buying every Star Wars collector item I could find at the mall.  It seems like everyone in Indiana retreats into this kind of womb of consumerism, filling a house with big screens and bigger collections of media or whatever else.  The whole time I was in town, I wanted to buy something, and didn’t know what.  I felt this low-level depression, and my first response was either to eat something, or go to Best Buy and get something rack-mounted with lots of watts and inputs that would make me think of something other than life.

I’m home now.  I feel like throwing out everything I own, keeping the computer and maybe a dozen books.  It is so good to sleep in my own bed and use my own shower.  But I still feel strange and bad and conflicted with the trip, and I don’t know how to reconcile that.

One reply on “You Can Never Go Back”

Good story. I was born in a small town but moved to the Dallas/Fort Worth Metroplex when I was 4 and have lived all over DFW ever since. If I counted them I've probably lived in at least 5 or 6 different towns – just all suburbs of DFW. DFW is bigger than a lot of countries! Nostalgia is a weird thing though, I get deja vu constantly since my job requires me to go all over town. A lot has changed – for the worse with the economy – but a lot of things are strangely the same.