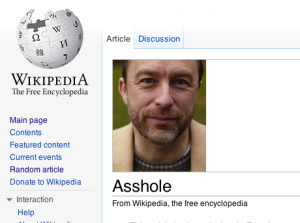 Whenever I get writer’s block, I hit wikipedia.  It’s arguable if it’s better or worse to fall down an internet k-hole by reading every single serial killer article you can find on wikipedia, but my hope is that I’ll eventually mine all of this for a good reference to throw in a story.

Here’s a short list of wikipedia articles that I’ve read recently that are truly bizarre:

Happy reading, and let me know your favorites, too.