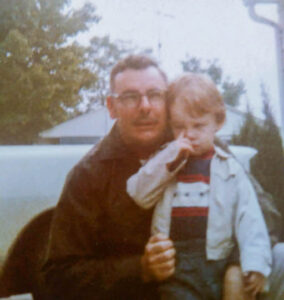 I know I’m always writing these “the death of” posts left and right about malls and stores and whatnot, but I really hate when I have to write one about a person, especially a person who I’ve known my entire life. And I’m not a fan about writing about family, because people get weird when a fact in your brain doesn’t match the narrative in theirs, which is why I’ve largely given up on autobiographical fiction or whatever it’s called this week. But this post isn’t about any of that; it’s about my uncle Jim, who died on the 27th.

My uncle Jim was my dad’s oldest brother, the oldest of the seven kids. His real first name was Ambrose, which I didn’t even know for years, because he was always Jim, or Jimmy. (My grandfather and my great-grandfather were also Ambrose. Prior to that, the names were significantly more Austrian: Paulus, Johann, Georg.) My grandfather died in a car accident when my father was six. Shortly after, my uncle joined the Navy and spent the next twenty-some years all over the world, working on planes, living on aircraft carriers. I vaguely remember him returning when I was maybe four or five. My memory was that he flew home and gave me the pack of peanuts from the plane. Nobody in my family ever traveled, so this was amazing to me at the time.

We lived in my dad’s home town from when I was an infant until I was seven. This was Edwardsburg, Michigan. It’s immediately north of Elkhart, and it’s a small village that had maybe a thousand people back then. My grandmother lived there, and was retired. My uncle retired from the Navy when he was 40 or so, and moved back in with her around 1975, to take care of her until she passed in 1993.

My uncle never married. I’m not sure he ever dated. He didn’t smoke or drink; he never swore. I can’t remember him even raising his voice. What I do remember is him always being around, always helping, coming over to do things around the house. My parents had this rundown cinderblock house, and they were always continuously adding onto it, sealing off the front porch into a room, covering the bricks with wood planks, adding in new windows, painting new trim. He was always around doing yard work or playing with us. And we spent a lot of time at my grandmother’s house, which was maybe a mile away, near the lake. That place was a central hub of activity for all seven kids, their kids, the neighbors, and many others. Almost my entire memory of Catholicism was going to the service, getting donuts, then going to my grandmother’s to play with my uncle and my cousins.

I have a lot of memories of specific things we did, things he taught me: playing golf, collecting cans for the deposits (ten cents in Michigan), playing card games, reading books. He and my grandmother were garage sale fiends, and any time he found a trove of Encyclopedia Brown books for sale, they were mine.

I also think a lot of his selflessness, and how he took care of my grandmother. He always drove her everywhere: to appointments in Elkhart; to see family in South Haven; to Florida in the winter when her health was poor. I remember him coming back from one trip and telling me all about watching an early Space Shuttle launch. I think he was a father figure to all of us cousins, and later the second cousins. (There were I think 13 cousins, and I don’t even know how many second cousins.)

After my grandmother died in 1993, he continued to live at the same house, and it was still our central hub for the family. I would go there any time I was home. Unfortunately, his health deteriorated over time. He managed to live alone until maybe four years ago, when he fell and went to a rehab center. He managed to hang on until he was 88, which is phenomenal. It’s sad for him to have gone, but he lived an amazing life. There was much tragedy in his lifetime, the loss of both parents and four siblings (one to suicide, three to cancer, all too young). But there was such great humility and service and selflessness in his whole life.

My uncle used to take us to McDonald’s when we were little. There wasn’t one in Edwardsburg; you had to go to one in Elkhart. This was pre-McNuggets, pre-Happy Meal, everything fried in beef lard, everything inside a shade of brown. I know it’s stupid, but when I got the news Tuesday morning, I went to McDonald’s for lunch and ordered two cheeseburgers and thought of that. A dumb tribute, but a strong memory to a long time ago. He will be greatly missed.