So, yesterday I did this: 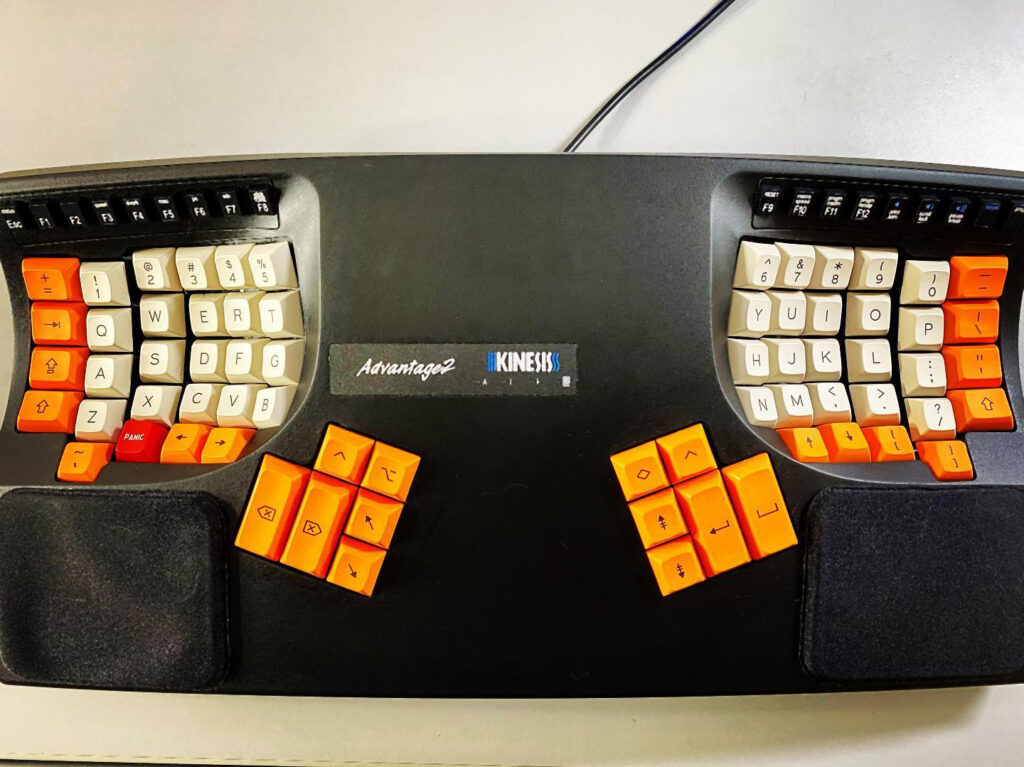 I was bored and wanted to make this keyboard look a bit retro. I forget what kind of ancient terminal I was looking at when I decided the colors. I think it was an old Raytheon terminal. I honestly wanted something a bit more orange for the modifier keys, like a glossy bright orange, and then a chocolate brown Commodore 64-style for the letters. But this is close.

I’ve written about the Kinesis before. I wasn’t 100% happy with the new version I got last year, so I’ve been on the hunt for new keycaps, but the Advantage has some oddball keys, especially in the thumb clusters. The folks at pimpmykeyboard.com have the hookup, though. In their DSA Standard keyset, there is an option for the 28 modifier keys, with either text or icons. Then a 50-key standard alpha set makes up the meat of the keys.

The Advantage comes with ABS keys, and these ones are PBT plastic, which feels slightly more textured and not glossy. They feel better and are supposed to be more durable, and won’t get greasy over time, which is a plus for me, given how much I eat at my computer. The PBT keycaps sound slightly different, maybe a bit sharper than ABS. They’re also all the same height, which is weird in a few places. The thumb keys were slightly higher in the stock set.

Also, there is a Panic button on the § button in the lower left. The only time I ever hit that key is accidentally, and I usually do panic then.

The color codes on these are GQN for the gray and OAX for the orange. The orange is slightly too orange for me, I think, but I’m getting used to it. They gray reminds me a bit of the later-model DEC keyboard for the VT-420 terminal. When I was at IU, the labs of terminals (like SPEA or the HPER) had old VT-240s with the more dark beige color scheme. But I remember the registrar’s office getting a fleet of brand new VT-420s when they digitized class signup, and those were a much more white keycaps.

DEC (and HP, and IBM) had the symbols more in the upper left corner of each key, instead of centrally like these. These ones remind me more of old old terminals, like the TeleVideo terminals we had at IUSB, which never worked right with emacs or any OS written in the 70s or beyond. (Just a reminder: if you ever worked on PRIMOS, you’re probably eligible to make 401K catch-up contributions now.) Same with the Commodore 64, although they went with the upper corner starting with the Plus 4.

I couldn’t find the little function key caps, so they stay stock. I also just realized that the stupid keypad layer thing won’t work for me, because the symbols aren’t on the front of the keys. I almost never use that, except when I have to insert a trademark symbol, and my new company trademarks almost nothing, so I’m safe for now, I guess.

Semi-related: this keyboard completely died about a week ago. I would press a character and it would type in Klingon. I tried a different dongle, a different computer, rebooted computers, rebooted the keyboard, nothing. Emailed Kinesis and then realized I bought this from a third-party vendor on Amazon and would likely be hosed on the warranty. I took it apart, reseated the cables, but expected the little motherboard on it to be toast. So I got out my old Advantage, took it all apart, and cleaned everything with rubbing alcohol, because it had ten years of food and cat hair inside it. I have pictures, and you don’t want to see them. Got it all running, and then the next day, I plugged in the new/broke keyboard to see if I could get a diagnostic report for support. Everything worked 100% fine. No problem. Of course.

Kinesis has a new Advantage out now, which is a full split, and has no function keys, just a layer where you press some other key and the number keys to get a function key. I think they moved the Esc key to where Caps Lock normally is. I have Esc in the left thumb cluster, along with an extra Ctrl key, because having just a right-side Ctrl is a problem. So I probably won’t upgrade for a while. I’d like to think this one would last another ten years and that I’ll be retired by then, but who knows. Maybe I’ll have to keep modifying the same one to keep it going for the rest of my career. Or maybe I’ll switch to something completely different? We’ll see how this one goes.