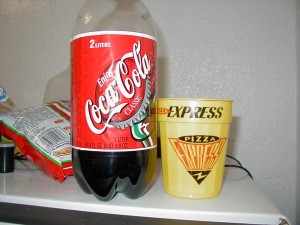 They recently changed the formula of Coke Zero to make it “more like regular Coke.” It tastes like a mix of Listerine and cloves now. The only thing is has improved is my ability to quit soda, which hasn’t happened yet, but probably should.

I would normally be more upset about this, but I ultimately have no time to care. I drank a case of it and can’t tell the difference now, so on to the next problem/outrage. I used to be much more upset when a company made a lame decision like the discontinuation of Surge, the dropping of the Taco Bell Mexican Pizza, or the fact that I’ve eaten the same exact oatmeal every morning for twelve years and they decided to stop selling in packets. Life is too short.

After dumping all the money into my car over the last month, I had a fun experience with it. I was driving off to the mall a week ago, and after I got up to highway speed on the 580, every warning light in the dash came on, and the info panel said “HYBRID SYSTEM FAILURE – PULL OVER IMMEDIATELY.” The dynamic braking stopped working, and the EV system went completely offline. There was a Toyota dealership just past the next highway exit, so I swung in there and dropped it off. They said they’d get to it on Monday.

This began a weekend-long spiral into figuring out if I needed to buy a new car. The hybrid system is still under warranty, so if it needed a $5000 battery, that’s covered. But I figured the dealership would add a $4000 spine reticulation charge or whatever the hell, or take six months to fix it. The car’s probably worth about $7000 in good condition. When the Yaris reached the end of the line in 2014 and had unknown wiring problems only fixable by a dealer, I brought it to the sales counter and they made me a good deal on the trade-in, so I figured I’d do the same. They don’t make the Prius C anymore, and the Camry and Corolla hybrids are honestly better cars than the Prius, so I burned a lot of cycles pricing this stuff out, trying to figure out what I wanted to pay, what I wanted to finance, etc etc.

Monday morning, they ran the diagnostic and said it was just the ECC lost communication with the system and threw a few codes, so it shut down the entire hybrid system. (If you stumble across this in a search, the DTC codes were U0140, U0073, and U0126.) The only obvious culprit was that I have a ScanGauge II plugged into the ODBII port. I have since I got the car; it’s a holdover from when I had the largely-gaugeless Yaris. I don’t really use it anymore, and the tech theorized that maybe the cable got bumped, or something else happened. He cleared the codes, unplugged the ScanGauge, and no problems since. No charge on the scan, either. So I saved $200 plus another $25,000 on a new car.

I’ve been having a lot of trouble getting anything going writing-wise. In a fit of “do something completely different,” I did a Ctrl-C Ctrl-V on the project file for my first book, and started on page 1, taking notes and editing things. I’ve had this stupid idea to write a thirty-years-later sequel of the book, and I thought I came up with a good gimmick to get it going, but I needed to go through the old draft, partly to get it all back in my head, and partly to George Lucas in a few minor changes to get the two books to line up correctly.

It’s an …interesting experience to read writing I haven’t touched in over twenty years, especially when it’s a radical departure from what I’ve been writing ever since. There’s obviously some very wooden writing, and little bone-headed typos abound. The usual complaint about the book is that it’s too long, and generally plotless. I could see trimming the book slightly, tightening up things. But for every subplot I would think about trimming, I think there’s another that could have been explored more. And it surprises me now that there are so many characters, so many subplots. It also follows an overall arc more than I thought.

After I got about a third of the way through it, I got disinterested with the idea, though. I can’t go too into it without revealing the gimmick, but I wasn’t interested in writing that book. And it’s been a long time since I’ve put a lot of focused thought into Bloomington. I haven’t spent more than a few hours in town since 1999 when I stopped there for a few days on my move east. Writing a sequel would need some solid reason to be there, and not just the main character wandering around having regrets about every person he dated a million years ago, and being amazed at how all of the stores at the mall closed. Maybe at some point I will visit again and get the spark to write this, but who knows.

Speaking of, I’m still on for the Seattle trip in two weeks. I have been working on a list of what to do, but I haven’t done any heavy research yet. I just now started thinking about what camera or cameras to bring, or if it’s time for a new one, and I need to shut down that conversation before it starts.