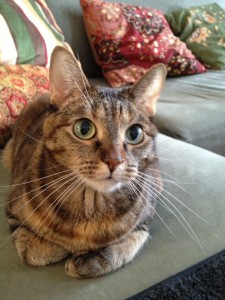 First things first, Squeak seems back to normal. She spent a week in cat jail, this playpen thing with a mesh roof on top, something we had from when she broke her leg back in 2009. We’d let her out here and there for supervised play time, but there are metal stairs and too many ledges and things for her to jump on. She was also on a heavy dose of gabapentin, which kept her pretty sedate. But by about day four or five, she was getting restless, and we were lowering the dosage. She seems fine now, and the jail has been taken down, so that’s all good. If the idiots in my neighborhood would cut the shit with the fireworks, things would be perfect in cat-land.

I guess I didn’t mention it, but my back has been out for about two weeks. It started on a Sunday, and of course there’s no great story behind it, like that I was jumping from a helicopter or fighting sharks or whatever. I think I was putting away a tube of toothpaste after brushing my teeth in the morning.

I have the occasional thrown back, a pulled muscle or whatever, but this is probably the worst one in memory. Maybe back in 2015, I had a situation that lasted about a week, but this one is considerably worse. Sitting, standing, walking, laying down: all were bad. So I iced it every hour, and kept on the TENS thing constantly. (If you have back or muscle pain and you don’t know about these, it’s the best $40 you’ll ever spend. Go to Amazon and pick one up immediately.) I’ve also got the chiro doing some work on it, and it’s getting there, but I haven’t shaken it yet.

My conspiracy theory on this is that the sudden weight loss over the last few months (I’m just shy of 25 pounds since April) is pulling everything out of alignment. Great news that my gut is going away, but my back muscles are used to a certain amount of tension there, and it’s all shifting. So the back tenses up, the pelvis tilts, the front of my thighs are overworked and hurt, etc. It’s getting there, but it’s been brutal. Hopefully in another couple of weeks, I can get it fully under control.

I figured out the vacation stuff, after a big struggle with travel sites and destinations and stuff. Anyway, I will be in Seattle from the 7th to the 14th of next month, which will be interesting. Aside from a plane change at SeaTac, I haven’t been back to Seattle since I left in the spring of 1999. And things have 100% changed, from what I hear.

Example: I will be staying in Northgate. As I mentioned in The Death of Northgate, the mall in Northgate is completely dead, and currently getting torn down. The Denny’s is long gone, as is the pancake house where I ate brunch every Saturday for years. Northgate is an okay-ish place for me to stay, because it’s by the highway and I didn’t have to pay another sixty bucks a day to park. But it will be weird.

I was also thinking about driving versus public transit, and I think all of the systems other than the busses happened after I lived there. Sound Transit was nothing more than an ongoing political argument when I left, and had a major scandal after that, but seems to now have a light rail system going everywhere, plus a streetcar system that goes very close to my old digs in First Hill. I’ll probably try it out, but I have a feeling I’ll spend a lot of the trip driving giant circles on the Jon Konrath Reality Tour when I get there.

I have no real plans yet, and need to work on that. I might try to go to a Mariners game, and tick that ballpark off my list. The MoPop is something I definitely want to check out. I will also probably do all the usual shit, Pike Place and Pioneer Square (which I hear is a bit dodgy now) and whatever else. Plus all the remaining malls, I guess.

If you are in Seattle, ping me and we can hang out, too.

Last night’s dream was this technical failure loop where I was trying to buy a Queen album to listen to out of curiosity or whatever, and I could not find one. I was scrolling through three devices: a phone, an ipad, and some kind of music review/player tablet thing. I’d find a hit on one device and it would redirect to the other; the search button would vanish on the tablet thing; the band’s entire discography would be missing from Apple Music; google searches would either go to articles about the queen of England or would just redirect to ads. I wondered if Universal was in a fight with Apple and pulled everything, or if I was just having a senior moment with the technology. And I started to almost see the edges of the dream, caught myself thinking “Is this really happening?”