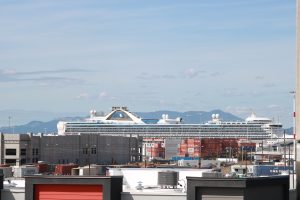 I’m not alone here in saying that things got weird fast here.

I’ve been debating writing about any of this. I’ve seen every hot take possible on COVID-19, and I’m seeing endless posts about being shut in, suddenly having to work from home, losing work, panicking about food and medical care, and so on. And in the current climate, I feel like putting anything out there opens me up to “oh, you think you have it bad?” attacks. I feel the same way about writing almost anything these days. We’ve fallen down this pit of stupidity that makes talking about almost anything pointless.

But, I need to keep writing every day. It’s more important than ever when the only other choice is to freak the fuck out about everything. And also, I know someday, I’m going to want to look back and see what I was thinking as World War C unfolded. If you look down at the sidebar here, it’s missing a few months of dates in the fall of 2001. This wasn’t a conscious decision; I was just working on finishing Rumored and was too busy to run this thing. And now I wish I could go back to read entries from September and October of that year, to see what I was thinking the last time the world was ending.

So first, the boat. The fucking boat. That Princess cruise ship docked at the Port of Oakland like a week ago. (I don’t even know when it was. The last week seems like a year and a half long.) The ship was about four thousand feet from my house, and if I was up on the parking garage connected to our building, it was plainly visible. (It’s not visible from our house, because they built another set of townhouses right in front of us, blocking our view. That’s another point of aggravation, but what can you do.)

Despite it being that close, it was a world away. No danger of infection, no view of the evacuation, just a giant symbol of how shit was about to go down, sitting on the horizon. The optics of it were bad — “well, we can park this thing in Oakland, because nobody lives there.” Thanks a lot, fuckheads. I understand the logistics of deep-water harbors and all that, but I’m sure if Atherton had a fifty-foot draft depth berth next to it, there’s no way the ship would have ended up there.

I also got the usual craziness from relatives who assumed I was ten seconds from death, like I do every time there’s a forest fire six hundred miles away or a 3.2 earthquake outside of LA. I had a real problem after 9/11 in that for a lot of people, I was their closest connection to the attacks. I did not like being in that position, being the face of the disaster, especially from people who generally had zero interaction with me, and suddenly they had a best friend who was in the towers when it collapsed, even though neither of those things were true.

The shelter-in-place happened quickly. At one point, they said seniors should think about staying home, and hours later, we all had to go on lockdown. Things changed fast, and in a world of clickbait media and dumb algorithms, it was difficult to get straight answers on anything. There were more questions than answers on Monday, and I didn’t wrap my head around the enormity of the situation as it was happening.

The Saturday before, it was rainy and cold, and I drove out to Pleasanton to walk Stoneridge mall. I was slightly apprehensive about it, but I figured if I kept my space and didn’t touch anything, it would be no problem. The mall wasn’t empty, which surprised me. I think that was more scary than if the mall was completely empty on a Saturday. The quick walk made me super anxious and nervous, and I had to get the hell out of there.

That mall is now closed — all Simon malls are. The only malls that are open at this point are insane or stupid. A month ago, the whole concept of the mall in general had a shaky future at best. Now, malls are absolutely fucked. Some of the more prosperous large chains are withholding their earnings projections statements. Every anchor store imaginable is completely dead. None of the mom-and-pops will be able to survive. At least in the bay area, malls that were living day-by-day are going to be shuttered for months. At best, they’ll be temporarily reopened as virus hospitals. Most will probably end up in foreclosure, chained up, left to rot. Maybe in five or ten years when the market is back and REITs are thinking about redevelopment, they’ll get rebuilt into apartment complexes.

I wanted to get out of the mall nostalgia thing. Looks like that decision’s been made for me. Hang onto your photos, fellow mall-walkers. It’s all we’ll have left of the era of indoor shopping.

I’ve been working from home for almost ten years now, so this is business as usual for me.  I never leave the house anyway, and all of my meetings are always on Zoom. If anything, things are more chaotic for me because I simply have too much work to do. Not to get into details, but I have three really big things going on, plus an endless barrage of update meetings on what’s happening, how we’re responding, etc. Also, there’s a lot more chatter on Slack, in email, on Zoom. One of the reasons I love WFH is that the eight-hour office work day is really about two hours of solid work, and six hours of social interaction and distraction and annoyance and ritual. Remove that, and I can do three times as much work, plus still have time for cat herding and whatever else. But a lot of other people are getting stir crazy over this, and it’s ramped up the amount of online distraction. This is in addition to the bad news every two minutes on the rest of the internet.

The structure of my work day routine has not changed, for the most part. Work all day, try to take a walk at lunch (that’s still allowed), try to write (and don’t), then watch TV until bedtime. The weekend is going to be another story. I usually walk around my house during the week, and spend the weekends driving somewhere else to walk or hike or shop or whatever. Now, I can’t officially do that. Not sure what I should be doing to stay sane. And this will go on for weeks, or maybe more. I know, #humblebrag, I still have a job and a roof over my head and health insurance, and I’m worried about park access. I’m mentally ill, go fuck yourself, see the second paragraph above, and feel free to start your own blog.

I think the worst part of all of this is the resonation between this and 9/11. There’s that overwhelming feeling of panic saturated into everything. The economy is in free-fall, and not coming back. Major industries like the airlines, auto production, retail, restaurants may never recover. Many things we took for granted two weeks ago have completely vanished. A large swath of the public is completely fucked. And none of this is even including the tens of thousands of people who are going to die from this.

I don’t officially have PTSD from 9/11, at least from like a diagnostic standpoint. And if I did, I’d be too ashamed to admit it, knowing that people in my office died, and they had family and friends and spouses who were directly tied to it, while I was just an observer. But sirens can get me ramped up. The smell of burning electronics has the same scent as the powdered concrete and metal smoke that hung over lower Manhattan, which doesn’t exactly have a calming effect on me. I tend to get too amped up over natural disasters and emergency evacuations and mass-panic situations like that. And having a helicopter hover a thousand feet over your house 24/7 for a week so the channel 2 news can get a picture of a fucking cruise ship isn’t great for this predicament. All of this, all of the uncertainty and the plummeting economy and the thought about if the grocery store is going to be open in a week and if I’ll still have a job by then or if banks will still be open — there are strong parallels, ones I can’t entirely put on the back burner and ignore.

This situation makes me think way too much about the fall of 2001, the feeling that all of lower Manhattan was going to shutter, send everyone back to whatever square state they came from, leave behind a skeleton crew of locals and a few bodegas, boarding up everything else, turning into some burned-out dystopian nightmare like the 1977 shown in every Son of Sam or Ramones movie. When I walk outside with nobody around, almost no cars on the road, no planes overhead, it reminds me of that same feeling I had eighteen and a half years ago. It’s scary. It’s something I wish I could ignore. It’s something I can’t. I have to work on that.

Not much else. Working. Watching TV. Trying to not look at my 401K, which I think is gone now. Playing Out of the Park Baseball, and simulating a season per month, now that the 2020 one is probably dead. This week, my team is 61-60 and three games out of the wild card, with 40 games left. (It sims a game every thirty minutes.) The 1971 Dock Ellis is the ace in my rotation, and my outfield is a 1984 Tony Gwynn, 1976 Ron LeFlore, and 1934 Jo-Jo Moore. If you’re a fan of the national pastime, spend the twenty bucks and get a copy. Drop me a line when you do, and we can start a league or something.

I should be writing. I’m not. I should work on that. Hope everyone else is surviving out there.