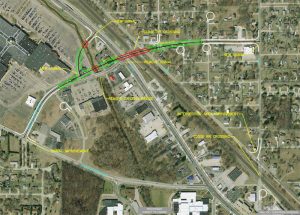 This is an oddly specific bit of nostalgia, and I’m not sure it matters that much unless you lived right by the Concord Mall in Elkhart, Indiana. But I’m going to babble about it anyway.

[Note: I wrote this post a year and a half ago and never finished it. So, this is even more stupid and trivial now that I’ve gotten around to finishing it.]

So the Elkhart County Commissioners picked a plan to build a railroad overpass in Dunlap, the part of Elkhart by the mall, where I grew up. And while I would have loved the idea of a way to cross the busy train tracks back when I lived there, the plan does cause a lot of change that opens up some odd nostalgia, the kind I get when an old haunt is torn down.

Some background first. There’s a stretch of railway corridor that runs roughly following US-33, from Elkhart to Goshen and further south. A large rail yard, once the biggest one in the country, is northeast of this area, and the result is long trains. A lot of long trains. There were routinely cargo trains of a hundred or two hundred cars rolling through town, multiple times a day. And there were no overpasses or underpasses, unless you drove all the way downtown in Elkhart, or I think there was one out in Goshen. You’d routinely get stuck waiting on a train almost every day, or you’d do the maneuver where you’d drive on a parallel road as fast as you can and try to outrace the train, getting to the next gate down while it was still open. Or you’d go around the gates, and either get a huge ticket, or get killed. (This happened often, especially when it was icy out.) It was bad enough that there were places in the area where two fire stations were built on either side of the tracks, because if there was a Conrail going through, your house would burn down before the trucks got there.

So there’s always been a need for a viaduct or overpass. And they did build two since I left (Prairie Street and Indiana Ave) which I never cared about, since I didn’t live in Elkhart anymore, didn’t pay for them, and both were further north than my old neighborhood. But as I read the plans for the new construction in Dunlap, it was oddly disconcerting to me, what major surgery would happen in my old neighborhood.

The details, which I don’t expect any of you to understand unless you lived there:

There’s a lot of weird things that happen because of this.

Anyway, this is all some fairly obscure trivia, and I don’t really know why I’m writing about it. If you grew up near the area, you might find it news, especially since the local newspaper is now impossible to read online, and only publishes high school football scores.