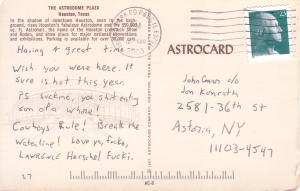 At the start of every year, I have the grand idea of writing every day for the next 365 (or in the case of this year 366) days. This year’s excuse is that I brought back acute bronchitis from Wisconsin, and I’ve been fighting that since Christmas. It’s the kind of thing where I can sit down for five seconds and be deep asleep, and even getting ten, twelve, fifteen hours a day doesn’t help. I went to the doc last week, got antibiotics and instead of my beloved Permeth, she gave me some garbage cough pills that didn’t work. I’m mostly okay now.

You probably can’t tell, but I’ve covertly been going back into old entries and cleaning things up, adding tags and fixing broken links and boneheaded spelling mistakes. I’m always surprised by the amount of writing on this site, and I always like when I stumble upon an old entry and read it and have totally forgotten about it or the events that transpired that caused me to write it. I never know what I should be writing here on a daily basis, and that critical thinking, obsession over what is my “brand” causes a horrible self-censorship that stops any writing. But I look back at various eras when I was writing every day about nothing, about killing time or various thoughts and obsessions, and that stuff is always gold to me.

(It opens the obvious questions about “why don’t you write books like that” or “why don’t you turn those posts into articles” or whatever the hell. I did an anthology of early posts from this site, and it sold close to zero copies. And what I do here is exercise, not writing. It’s like telling a person who jogs five miles a day that they should really look into being an NFL running back. No.)

I forgot to write about this, but when I was gone over Thanksgiving, the studio monitors on my desk died. They were an old M-Audio model that had a known issue with the amp, where it was a bit of a perishable item and the capacitors would eventually blow. I got six or seven years out of them, but I’d been looking to buy something else for a while. And that’s a huge wormhole, shopping for audio equipment. I get to the point where I can almost justify buying some expensive tube amp and bespoke speakers, then remember I have no room in this office. But I also don’t want to buy the $20 speakers you usually get for free when you fill out a credit card application at Best Buy.

Anyway, I bought a pair of Vanatoo Transparent Zero speakers. They’re actually slightly smaller than the old M-Audio ones, even though they have a bigger woofer (four versus three inches), and it’s made of aluminum. The case is wood instead of plastic, and has neat magnetic grilles that are easily removed to see the goods. There’s also this passive radiator which is supposed to add better bass response. It has its own DSP, so I can plug it straight into the computer via USB. It has a variety of neat options like a subwoofer output and various limiter and sleep and crossover options I will never figure out. It also has a bluetooth receiver in it, which I will probably never use. Same with the wireless remote. Nice to have them, though. The sound is very transparent and clear and nice at volume. They are near-field monitors, so not great for filling a room, but perfect for sitting at the computer. There’s no goofy “voicing” to them, just straight-up reproduction of what’s on the track. My only complaints are there’s no headphone pass-through jack (but I can just plug into the computer, I guess) and they could probably use a subwoofer. I actually have one sitting in the next room that’s not hooked up to anything, but I have no space in the office for it. Anyway, they are perfect for that price point, and a great solution between the cheapie $20 speakers and blowing a few grand on an audiophile set of bookshelf speakers and amp.

Not much else going on. I took some time off writing during the holidays, which I never do, and it took some effort to get back going. I have two big books that are on the vine and need some serious work to get going in the right direction. One of them is essentially a sequel to Rumored to Exist. It’s currently about 350 pages and totally directionless, with no real through line or “rails” to it. And based on the sales of December’s book, it’s hard to get enthused about packaging up a book that’s about four times as big and trying to get people to read it.

But it’s fun to dabble with it. The big secret is I enjoy the process of writing, the actual meditative action of getting lost for a few hours putting words on the page. I hate everything else, the sequencing, editing, packaging, marketing, production. I’ve been going back and trying to figure out how the original Rumored happened, what kept me going on it. It took almost seven years to write, and it was essentially completely rewritten seven times. I recently went back and skimmed the annotated version (which like only four people have read) and it has a lot about it was written. Always fun to look back at that, but my writing process is completely different now. And you can never reproduce how things like that happened.

Birthday in a week. It lands on a Monday, but we have the day off of work for MLK day. I’m doing another superfloat in the isolation tank. I’d go to Denny’s, but Denny’s is so horrible now. I vaguely thought about leaving town for a three-day, but prices are probably jacked up, and I just want a weekend without anything.

I’m still sitting on my reading list from last year. I rated everything, reviewed nothing, so I’m not sure if it’s worthwhile to share it, but maybe I will later this week.