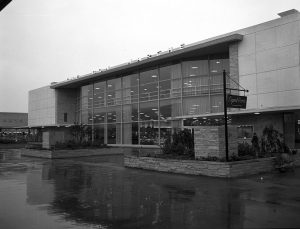 Looks like Northgate mall in Seattle is quickly winding down. The JC Penney already closed, and the Macy’s and Nordstrom are in the process of shutting their doors. The plan is to demolish the main stretch of the mall, leave some of the external “village” buildings that were tacked onto the front in the mid-00s, and then build an NHL practice facility and some housing. I hate being nostalgic about this place or any mall in general, and I have mixed feelings for a few reasons.

When I lived in Seattle from 1995 to 1999, Northgate was sort of my default mall. It wasn’t my favorite mall, and it wasn’t the best one in the area, but it was the closest to my house, and I ended up there at least once a week. When I first moved to Seattle, I stayed at my friend Bill’s place in Mountlake Terrace for a month, and took the bus down I-5 every day for work. And every day, we’d pass this sprawling shopping center, just off the highway. One thing I remember clearly is it had a giant two-screen movie theater on the north side, with a changing-letter marquee where the words were taller than me, advertising the movies Clueless and Apollo 13. So when I got a car and had some time on a weekend, it’s the first mall in Seattle I visited.

After I moved to First Hill, this mall was a straight shot up the highway for me. Hop on I-5, drive a hundred blocks, exit, done. Even though I worked next to the much smaller Factoria mall across the lake, I ended up driving to Northgate pretty much constantly. Between the Denny’s and a smaller local pancake place, I always had a default diner there too, so every Saturday was spent at this mall, more or less.

Northgate is arguably the first mall in America. There are like a half-dozen different malls that claim this, and I’m too lazy to research which one is right. But they built two strips of stores in 1950, then covered it with a “sky shield” and eventually sealed off the whole thing in the early 70s, making it an enclosed mall. They later built one of the first Nordstrom stores, the big two-screen theater, and the other anchors. Later additions while I was there in the late Nineties included a Toys R Us, a food court, and a general remodel. In the 00s, Simon did their usual “lifestyle addition” thing with a Potemkin village of outward-facing smaller anchors on the west side of the mall (one of them always being an Ulta Beauty), and removal of the theater (and the giant totem pole that was in front of it.) A Target and Best Buy went in across the street, and the surrounding landscape of the area has completely changed five times since I left. There were also various anchor and store flips in the last twenty years. I wasn’t there, you can look it up.

I honestly found the architecture and layout of Northgate to be a bit boring, and deceiving. It looks small, but it’s gigantic. When I lived there, they had four anchors, all of them softlines, which bored me. (JCP, Nordstrom, Lamonts, Bon Marche.) And the entire mall was a single hallway, a straight 1,500-foot shot with stores on either side. It didn’t have a winding floor plan, so it seemed smaller, but if you walked from anchor to anchor twice, that’s over a mile. It had no vintage charm, just high ceilings and faded white everywhere, like an airport concourse. It also had few stores where I really shopped. But I still ended up there a lot, and spent an insane amount of time walking up and down that long hallway, looking for… I don’t know what. The drab non-decor was replaced during the 97-98 remodel with fake-ass timber accents on the high ceilings that made it look like a ski lodge, which was all the vogue in the time in the PNW.

What attracted me, other than the proximity to my house, was that Simon malls all had this universal emotional antiseptic feeling to me. Wandering that place felt very similar to walking through College Mall in Bloomington, or University Park Mall in South Bend, even if they layout and the stores were different. Especially in my first year there, I was extraordinarily depressed, missed Bloomington a lot, knew almost nobody, didn’t know where anything was, didn’t have a TV, and was always broke. I later found other malls further out, and other stores to buy music and books and food. But it became a default place to mope around, walk a few laps, and then go home and try to write.

I didn’t buy stuff in that mall much. I only went to that movie theater a few times (I remember seeing Event Horizon there) and I used to pop in the B. Dalton every time I visited. Bon Marche had a Vans shoes section, and I’d buy a pair each year like clockwork. A Wizards of the Coast store was always worth a browse, even though I didn’t play D&D or Magic at the time. An office supply/craft store provided me with a lot of fancy pens I’d later lose. The mall had an attached drug store where I’d frequently load up on cold medicine, and a QFC grocery was good for a frozen dinner or two. After Toys R Us arrived, I’d pop in there for Nintendo 64 games. But more of my shopping was around the area, like the Silver Platter records just south of there.

Aside from the strange nostalgia for the place, and the fact that it will all be gone soon, is the fact that the coverage around the remodel sort of pisses me off. People in Seattle have always hated malls, it seems. They’ve always talked about how horrible Northgate was, even when it was a top-grossing mall. Now, the YIMBY crowd is super excited about the death of the mall, mostly because we’re all supposed to ride bicycles and something with a parking lot somehow triggers them. I don’t follow Seattle redevelopment news much, but we have our own vocal YIMBY contingent here, so I imagine the more-housing-at-any-cost crowd is celebrating the mall’s death enthusiastically. Seattle has 100% changed since I left, and I get it — cities change. Since I left, Amazon has hired more people than my home town has, period. So, housing crunch, people hate malls, yada yada, you already know the rest.

It’s been over twenty years since I saw that place, or any of Seattle. I still miss it, because it was such a key time in my life, my first four years out of college, which felt more like a decade. But it’s an extreme case of “you can never go back,” because so much of the city has changed.

Wish I had some old pictures of the place, but that was in the film era. I do have some pictures of my VW in the parking lot, and you can almost sort of see the east entrance of the mall in the background of one shot. I used one of the pictures for the third edition cover of Summer Rain, but you can’t see anything but the pavement in the zoomed-in shot. (And fun fact: the license plate in the pic is a photoshop job. And Indiana didn’t had front license plates in 1992, so that’s wrong, too.) Anyway…