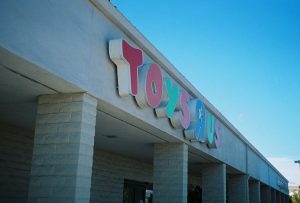 No, I wasn’t one of those weird religious kids who weren’t allowed to play video games, and I didn’t have hippy parents who thought GI Joe was promoting war. TRU just wasn’t an option for my corner of Indiana.

Like I mentioned in my previous post, K-Mart was a big part of my childhood. The two K’s really — K-Mart and Kroger. This was before Target, before Wal-Mart, and those two stores were the bulk of my retail experience in the mid to late Seventies. I spent all my time in the toy aisle of K-Mart; I could probably still note its location on a store map, had the store not been gutted and turned into a Big R farm supply. I also did a lot of my toy gawking at a now-gone variety store called GL Perry’s, which was just down from the Kroger in the also-gone Pierre Moran mall. But it was a few years before I really got locked into a proper toy store for my Lego and Star Wars needs.

The Concord Mall didn’t have a Toys R Us, but did have a Kay-Bee toy store. I was definitely a Kay-Bee kid. They originally had a narrow little store just to the left of the anchor that was then Robertson’s, and was later Meis, Elder-Beerman, and most recently Carson’s, before dying. It later moved into a bigger location in the middle of one of the arm’s spokes.

In my mind, Kay-Bee was slightly more disorganized and second-rate compared to TRU. The aisles were narrower, the shelves were more floor-to-ceiling and packed tighter, and the front half of the store was this blue-carpeted dumping ground for pallets and bins of toys, with little walking space between them. All the video games were locked away in glass cases behind the front counter, which was counterintuitive to browsing them for hours. It didn’t have the flow or the larger footprint of a bigger, standalone TRU store. It was a bit of a mess, but wonderful as a kid.

Another thing is that in retrospect, they had a lot more discount/clearance stuff, oddball brands and closeouts. It was a bit of a dumping ground for weird brands on the way out. And I used to fixate on that stuff, both because it was weird, but because it had the magical yellow tag on it saying it was discounted, showing the old price slashed out in red, the perfect argument for convincing a parent that you needed to buy it. And these strange off-brand things are now impossible to find online.

One weird example I was thinking about: so there was this big market for third-party Atari joysticks back in the day. Atari used a common 9-pin connector on the 2600, and they used the same circuit on the Commodore 64. I was always on the lookout for a better controller, a cheaper solution for the C64, and Kay-Bee was the dumping ground for every small company that tried to get in on the video game craze and got burned when it crashed. I remember buying a pair of the garbage wireless 2600 joysticks when those got dumped on clearance. I also had a weird touchpad controller that was like a mix of an Intellivision disc-style stick and the Atari keypads used by Star Raiders and nothing else. It wasn’t that great, but I have some obsession for finding it online, and it’s impossible.

The other big example was that Kay-Bee was a big dumping ground for the liquidation of the Mattel Aquarius, which was my first computer. I’ve already written about this at length, but the bullet is that Mattel crashed and burned about fifteen minutes after they quick-released this underpowered, chicklet-keyboarded machine, and they started showing up at Kay-Bee for like a hundred bucks in a bundle with four games and joysticks and everything else. I got that for my thirteenth birthday, and that started a whole great career that led up to where I am now. (Not sure if that’s good or bad, but middle management at a software company is probably better than coal mining.)

Anyway, Kay-Bee became my default place to go in the mall. Any time there was Christmas money or extra allowance or a birthday coming up, I’d gravitate to that spot in the mall. And every obsession of my pre-teen world was there, almost like a cycle of things I fixated on as a kid. It went from Star Wars to GI Joe to model trains to model planes to D&D to video games. I know a lot of people talk or write about how music or punk rock saved their lives, but for me, in those years, it was everything in Kay-Bee. I don’t know what path, better or worse, I would have traversed if I had not spent the beginning of junior high memorizing the Dungeon Master’s Guide, but going to Kay-Bee (and to Walden Books) to pore over the collection of modules and figurines and dice was a major percentage of my time.

At a certain point, things changed, and the fixation went to the other wing of the mall, the one with the independent record store, Super Sounds. The toy store was somewhat forgotten. It changed its name at some point to KB, and the later, Mitt Romney and friends drove them into the ground, a story that would later repeat itself with TRU. I never shopped at Kay-Bee after a certain point, although sometimes out at College Mall, I’d duck into that location as a nostalgia trip. I remember Kay-Bee going under, but I was tuned out of the news for whatever reason, and never really mourned it in any way.

Much later, Toys R Us did come into focus for me, but it was a place to look for video games. I remember buying a Nintendo 64 there, at the one in Seattle at Northgate Mall, and I’d always check them out to see if they had any weird cartridges, in the pre-Amazon days when you could just look up every cartridge in the world and be a click away from owning it.

But Toys R Us never had that strong reverberation with me, that primal childhood pull, just because it was off my radar. I think Chicagoland had many locations, and there actually was one just north of University Park mall, but I never regularly went to UP until I started driving, and then the interest was in music (and girls, but nothing ever happened there).

I can relate to the same angst that people have about the TRU bankruptcy, and the various rumors about brand necrophilia, the stories that they might come out of bankruptcy court as a holiday pop-up, or a mini-store inside Target, or whatever. I went through this with Wards, which I really missed after working there for years. And some random mail-order place later bought their name and use it for this pickwick-like catalog of Chinese junk, which never sat well with me. Wards vanished quickly, and it’s impossible to find any traces of it anymore. I’m guessing the same will happen to TRU. Lots of people are taking pictures now, but they’re uploading them to cloud services that will also die or be killed. Try finding a picture you put on Kodak Gallery or MySpace ten years ago — that’s what will happen to all deadmall history in a decade.

There was a TRU in Emeryville, a few miles from my house, which is now becoming some sporting goods store. I took a few shots last weekend of the one out in Dublin, which is just sitting there. I’m always curious to see what will happen with these places, and what direction retail would go. I should archive more, but like I said, the more I get into this, the more depressing it gets.