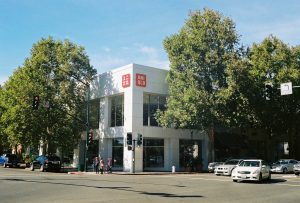 I’ve been shooting more and more film. I got back my second batch of 35mm last weekend. I have this Canonet GL17 GIII rangefinder that I bought in 2014 that I haven’t been using, because I have some intangible hang-up about it. Maybe it needs a different strap or it’s too hard for me to focus, or I don’t like having that many manual controls, but I haven’t used it much. I shot a roll in Walnut Creek, and it amazes me how crisp it can look. (See the picture in this post as an example.) I always think of film as having a more blurry or vague quality as compared to the exactness of digital, but that camera is so sharp, it is eerie. I’ll need to sort through these and post the best of them. There’s an album on my flickr for analog stuff here.

And yeah, looks like Flickr is changing. Their free accounts are being limited to 1000 photos, and some other goofy stuff. I’ve always paid for a Pro account, so no change here. I’m old. I have like 12,000 photos on Flickr, and I haven’t even really tried to publish everything I have on Lightroom, which has like three times that. I hope I can keep using Flickr for a while. I’d hate to have to dumb down my collection to fit some new Web 3.0 paradigm or whatever.

I shot a roll of 120 film in my Diana F+, and when I got it back, it was all screwed up. I have an instant back for that camera, and I forgot to take out the little diopter you put in front of the lens inside the camera. So all the pictures were way out of focus and had weird stuff at the edges. I fixed that, and shot a few more rolls. I also, in a fit of stupidity, bought a Holga camera too, which is possibly even worse than the Diana. Shot a roll of B&W in that. We’ll see how it goes.

I think one of the reasons I like film is because when I shoot in digital, I take a picture, and then look at it, and see if it worked, which takes me out of the moment of actually shooting. With film, I can’t see anything, so any incremental improvement I have to take with successive shots is still in the moment, and involves a certain amount of faith in my abilities. It also puts me in the moment with my surroundings, because if I’m walking, I’m looking at everything around me and looking for a perfect shot. I’m not walking and shooting everything around me. That sounds pretentious and precious, but it’s something I’ve been thinking about, especially as I dump more and more money into this.

I booked my winter holiday travel, and will be back in Indiana for a week. I don’t know any details, except that I’m staying in South Bend, and like everyone back there is dying or something. So that will be interesting. Looking forward to taking a few more pictures of Concord Mall before it is imploded or whatever happens there. (There are currently no redevelopment plans. There were, but that’s old news. See also previous post on this.)

Nothing else. Trying to lay low until the election is over, because everything is horrible.