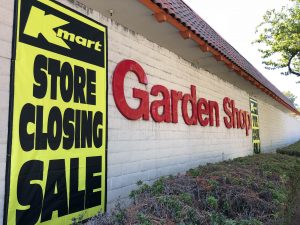 The news has been out for a bit about the bankruptcy filing of Sears Holdings, and the massive list of Sears and Kmart stores closing. In my area, it’s a bit odd, but the one in Stoneridge mall, an upscale mall that’s doing well, got the axe; the one in Hilltop mall, which is complete devastation, did not get closed. I think all the Sears stores I used to shop last century are gone, but that’s another post.

The closest Kmart to my house, which is in Pinole, is slated for closure. I’ve never shopped there, so I decided to head up there last week. It’s in a little shopping center just east of Hilltop mall, just down from a Target, and sort of hidden away on a lazy stretch of big-box stuff, like a Best Buy, a Lucky grocery, and across from a Sizzler that looks like it’s also circling the drain. (To be fair, most Sizzler restaurants have looked like that for decades, though.)

There are like three eras of Kmart for me. As a little kid, we were there almost every week with my mom. This was the Seventies, before Walmart, back in the days of blue light specials and the K Cafe. It was the place where I got all my Legos and Star Wars figures. I have very fond memories of that store. I can almost smell what the store in Elkhart smelled like, the mix of tru-green fertilizer in the garden center, syrupy cokes spilled on the floor of the cafe, and the heavy starched denim of Wrangler jeans. And I can still feel the wobble of the wire cart, the one with the broomstick affixed to one corner so you couldn’t push it out of the store.

I worked across the street at Taco Bell, and later just south at the Concord Mall. I bought my first CD player at that Kmart. And in the days before Target and before Walmart, I bought a lot of stuff there. And that logo is the Kmart logo I always remember, the slanted red K and the minty blue letters for the mart. Those old-school stores all looked the same, too, with the low-slung rectangular marquee, no curves and styling, and the big, all-glass front.

Then there’s the Nineties era of Kmart. By the time I got to college, going to Kmart was not a necessity; it was ironic. I would go late at night with my friends when we wanted to remember childhood, and goof on how crappy things were there. And Icees and corn dogs. Kmart tried to change then, with the big red K and the white mart in script inside the K. Some became a Big Kmart, with the Big in blue, and a yellow swoop under it, in true Nineties graphical style. They also made those marquees big and round and lofty, tried to look less like an early Sixties grocery and more like an actual department store. They added more stuff to compete with Walmart and Target, groceries and drug stores and whatnot. I’d still pop in back when I was back in Elkhart. And when I got to New York, there were magically these Super K stores, which was a weird nostalgic throwback for me to visit. (More stories about those at some point, maybe.)

Then there’s the new Kmart. And I have no connection to this Kmart. None. It’s like brand necrophilia, like someone said, “let’s make a store shittier than Dollar General, and just as a goof, we’ll call it Kmart, and put a monochromatic logo designed by a five-year-old on the front.” A scattering of Craftsman crap, a random layout, and a general feeling that makes the old Seventies redneck Kmart look like a Nieman Marcus. There’s a Kmart out in Concord I occasionally go to on a goof, mostly because it’s a nice drive on the outskirts of Mt. Diablo. But when I’m inside, there’s no connection, nothing that reminds me of childhood, and definitely nothing I’d want to buy.

So, the Pinole store. It was total devastation. There were gaudy clearance signs everywhere, inside and out. It looked like any name-brand merchandise they may have had, was gone. Maybe it was bought up already; maybe it was sent back to the vendors for credit. Entire aisles were closed and taped off. People were throwing stuff on the floor everywhere. Kids were putting on halloween costumes, running through the store, ripping open toys, and throwing them on the ground, while their parents ignored them. The entire store smelled like shit. There were large signs by the layaway department that said ALL SALES FINAL, and others with the Sunday circular, saying WE ARE NOT A PARTICIPATING LOCATION.

I went through the clothes department, and everything was on the floor. It seriously looked worse than when I went to the Astor Place Kmart on the morning of 9/11 and every secretary in lower Manhattan was trying to buy tennis shoes so they could walk home without the subway running. I picked around for any jeans that might fit, and they had no Levis or Wranglers left; they had a knockoff brand called “Rustlers” or something. The smallest size was a 50-inch waist.

I took some pictures, and hurried out. Honestly, the whole thing threw me. The entire dead mall, death of retail thing is really getting to me. So many things are shuttering, so many pieces of my childhood are vanishing. And so much of the history will be lost, because it’s only being instagrammed, and in five years, instagram will be cratered and unarchived. It really bugs me, and makes me want to archive more, see more, take more pictures. But the more I do it, the more it depresses me.

The other thing is that the more I dig around in these online dead retail communities, the more I realize I hate 90% of the people in them. Nostalgia groups are the worst. I sometimes creep in this Elkhart group, and it’s nothing but borderline illiterate people bitching about Amazon and technology, and waxing nostalgic about garbage food that will kill them. And maybe I shouldn’t say that. But there’s part of me that thinks that being obsessed about this stuff is only like a degree removed from hoping that coal mining jobs come back, which isn’t going to happen.

There needs to be progress, and there needs to be a future. And in looking back, I feel like we built too many malls because they were a convenient tax dodge, and we bought too much junk that’s now filling our landfills because we were told we needed to buy more plastic from China. And I’m torn, because I can waste so much time looking at pictures of old stores and reading about old malls. It scratches an itch that will always need to be scratched. But it prevents me from doing anything creative, or moving forward with my life.

I’ve had this stupid idea in my head for years, about doing a combination glossary, wiki, and blog about the Nineties, about my experiences and the places I worked and shopped and visited. And I feel some need to do this, before I forget all of it entirely. But I’ve written books that took place in the Nineties, and I did that glossary book, and they were my worst-selling books, and not in my voice. (Not that any of my books are selling anymore. Jesus christ my book sales are morbid these days. Another topic.) So I know I could burn a lot of cycles on this, but I feel it would be wasted time. But here I am, still writing about it.

Also, it hasn’t started raining yet, but when it does, that means lots more time in malls. I’m also going to be in Elkhart in December, so I’ll get one long, last look at Concord before they tear it down. Anyway.