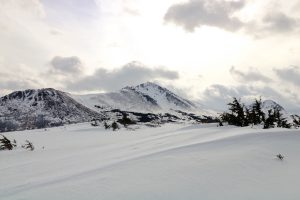 OK, I’m back. I’d planned on doing updates every day, and that just didn’t happen. The first half of the trip was too busy; the second half, I ran out of things to do and had no motivation to write in here.

I did upload my pictures. They are on Flickr here: https://flic.kr/s/aHsmhtk2H2

Here’s a high-level bullet list of stuff I did do, mostly so I’ll remember it in ten years:

So, that’s it. My general takeaway was that if you want to go do tourist stuff, go after Memorial Day, but then you’re going to pay more. If you want to ski or do snow stuff, you’ll need to go much earlier now. I was surprised skiing and snowmobiling were closed at the end of April, when they were open at the beginning of June in 2006. The strange desolation of the off-season was interesting to me, so I enjoyed it. I don’t think I could hack Alaska 52 weeks a year, but I don’t think I can hack my home location 52 weeks a year either. Anyway, check out the photos, and apologies in advance that I took too many.