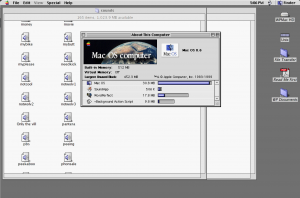 A stupid memory… I was thinking about how I used to love WordPerfect on the Classic Mac OS. It wasn’t a port of DOS WP 5.1; a different dev team wrote their own program, and the company called it WordPerfect, so it worked much faster. I always found it better than Word on the old Sys6/7 Mac.

Anyway, found this page: http://www.columbia.edu/~em36/wpdos/mac-intel.html – Someone has set up the SheepSaver PowerPC emulator to run MacOS 8.6, along with a few versions of WordPerfect. So you can download one image file, and with almost no fuss (aside from the big download) you can then run WordPerfect on a modern Intel Mac.

I was messing with this and realized I have a Stuffit archive of the Mac machine I had at my first job, 22 years ago. I’ve never been able to un-stuff it, because of the weirdness of Mac resource forks or whatever. I brought it into this emulated machine, and it instantly opened it. So I had the same set of files I had back on my Centris 660 AV in Seattle in 1996.

There wasn’t much there: the 1984 commercial in QuickTime; a bunch of QuickHelp source for the Spry Mosaic browser; some other assorted utilities, like DropPS and GraphicConverter. The fun find was I had a Sounds folder, which had a few hundred short clips of audio from Beavis and Butthead and Pulp Fiction. They were all sampled at like 10kHz; the whole folder is like 38 MB.

It reminds me of a time when Windows audio was almost nonexistent, unless you paid hundreds of bucks for a SoundBlaster, but every Mac had pretty decent audio, standard. There was a big culture of hoarding these little ten-second samples of Star Wars and RoboCop movie quotes. Like I remember hanging out with my Calculus teacher at IUSB – this must have been in late 1990. There were almost no Macs at the South Bend campus, but for some reason, he had a brand new SE/30. I went to check it out one time, and he spent half an hour playing me every sound file he had downloaded from the internet, these little clips from science fiction films, all hooked in so it would play Darth Vader when he started up or shut down his machine.

I don’t even know how to play these audio files outside of the emulator, but it works in the program. I guess now I can just go to YouTube and play the entire TV show if I want, but it’s interesting to see a snapshot of how it used to work back then. Also, the old Mac interface looks so blocky and weird now, which is hilarious.