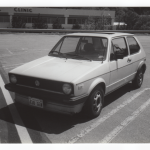 I realized the other day that the summer I fictionalized for my first book Summer Rain was twenty-five years ago. This should make me feel very old, except that it doesn’t seem like it was that long ago. I was twenty-one then, and in my mind, I’m the same person as I was then, but I realize I’m more than twice as old, and half a country away from Bloomington, and that’s depressing to me, that it’s an entire lifetime in the past for me.

When I’m not in the middle of writing something interesting, I often slip into this heavy, nostalgic, introspective thing, and burn a lot of cycles thinking about things that are long gone, like my time in Bloomington, the year I spent going to school in South Bend, even the time I was in Denver ten years ago, which seems like eons ago to me now. I try to remember the order things happened, the details of people and places I’d forgotten, and dwell entirely too much on things that happened, conversations I can’t fix, things I can’t take back. It’s unnerving that this stuff sticks with me, especially since I want to create things that aren’t my life, live in fictional worlds that don’t have to do with me. But the pull is so strong in old nostalgia, I can’t escape it.

There’s a certain draw to this near-era nostalgia that is completely addictive. Trying to find old images or articles or pictures of places I used to live or things I used to own is as compulsive as pornography, endlessly searching for the next thing to release some dopamine in the brain, give a tiny touch of satisfaction. I don’t know what I’ll find that will ever make things complete. And the draw of it is that so little of the early 90s, of my early 90s, is searchable or archived on the internet. Yes, I can go find a copy of that Nirvana album or the movie Singles or whatever, but try to find one picture of the IUSB lunch room where I spent every day of the 1990-1991 school year, and it’s impossible. I wrote some articles for that school’s newspapers that I will never find, unless I physically drive there and dig through their library. But I’ll still search, and maybe find a picture that reminds me of a computer lab where I used to work, a hint of what it used to look like, two renovations ago, when it still had PC-XTs and dot-matrix printers.

I keep thinking about writing something about this era again, another book. I thought about this a lot when I was in Indiana in 2015, in August. I’d never spent any time back in Indiana during the summer months, only returning for winter holidays, when everything was frozen over. And that feeling of summer, the hot days and air conditioning, then the cool nights and the sounds of crickets and clear sky and stars overhead made me think so much of the summer of my teenaged years, and made me think, “I have to write another book about this.”

I’ve struggled a lot with a book about the summer between high school and college, a fictionalized version of that summer in 1989. I think there’s a lot to write about: first love, first betrayal, leaving home, the big unknown of what happens next, and the beginning of a little bug in my head that would later develop into a crippling depression. There were also many things I didn’t know about at the time — I sat in northern Indiana in this pivotal time, the end of the Eighties, when the American Dream was quietly being led to slaughter. I only knew of life in that industrial bubble, the conservative bible-belt-meets-rust-belt pocket. Indiana never fully recovered from the early 70s recession when the early 80s one hit, and I graduated just as an expansion was about to burst. I didn’t know any of this at the time, but in retrospect, it sets an interesting stage for all of my personal garbage going on then.

I’ve written bits of this in stories over the years, and my completed 2008 NaNoWriMo project was an attempt at this book, which was finished but scrapped. I don’t feel like I was really able to nail it, to capture the feelings or set up a compelling structure to fit to this backdrop. It’s something I’ve wanted to revisit, but there are a bunch of things stopping me.

First, I don’t know how feasible this creative nonfiction stuff is in the era of Facebook and Google. I don’t think I could write Summer Rain now, because of the fear that a fictionalized person would find themselves and be angry that I was being unflattering, even if what I wrote was changed or masked or altered so it wasn’t true. I think just the fear of that would make me self-censor myself enough that I couldn’t operate. This is also entirely true of family members. I can’t write a first-person fictional book and get into it about the protagonist’s family, for fear that my own family would read this and think it was about them. I think Bukowski said he had to wait until his old man was dead until he started working on Ham on Rye.

But there’s also the conflicting fear that the longer I wait to write this stuff, the more it will fall out of my head. I find my memories fading of this era, and like I said, the physical relics of it are lacking. I took more pictures of my food this week than I took of anything in 1992. I archive all of my email now, although I get maybe five messages a week that aren’t garbage; I have almost no email saved from back then. There is a very real chance that if I wait until I retire or whatever and then decide to write this book, there will be none of it left in my head whatsoever.

And the biggest fear is that all of this is worthless to anyone but me. Summer Rain was not a big seller. Looking back, I can name half a hundred things wrong with the structure, content, characters, cover, blah blah blah, but there’s a horrible truth in that people like a book when they can identify with the main character, and if the main character is me and I’m ultimately an unlikeable person, people won’t like the book. I sometimes thing the current wave of nineties nostalgia could make a book set in that era appealing to people, but there’s a certain confidence thing there that I have to wrestle with, and it’s easier to put it off and go write about zombies or coprophagia or whatever.

During that 2015 trip, I started thinking about a sequel to Summer Rain, slightly informed by the John Knowles book Peace Breaks Out, which was the not-as-successful follow-up to A Separate Peace. The idea was that I had to return to Indiana twenty-five years later for some reason — dead parent, old friend, whatever — and I would see the contrast in all the changes (and non-changes) in the post-industrial wasteland. And I’d revisit all the characters, and what happened to them over time. One of the big themes in SR was the fork-in-the-road things, trying to decide on which way to go in life while in college. And in that book, every character subconsciously has a direction they were aimed, and one could predict the endings: this guy’s never going to leave town; this girl is going to burn through three husbands in ten years; this guy’s going to be a CEO before he’s thirty; this guy’s going to be found dead in five years. And one of the things I wanted to do was show how the unexpected happened with all of them, for better or for worse. And some people I know are still hopelessly stuck in this old era, never having moved past their high school or college self (much worse than I have it, even) and some people probably never think about the past at all.  I don’t know where I’d go with a book like this, but it’s something stuck in my craw.

I probably won’t do any of this, and will probably come out with another book of twenty stories or a hundred fragments of flash fiction about UFOs and sodomy, and nobody will read it.

Anyway, twenty-five years. That is really screwing with my head.