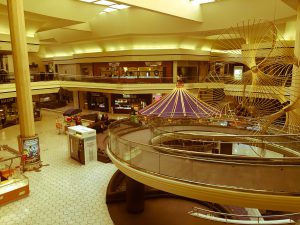 There’s a cruel irony in the fact that I’m now at the age where I need to old-man walk every day as per doctor’s orders, and I’d go to a mall and do the mall walking thing every day, but malls are all dying or dead. That — and the weather — is what brought me to Richmond yesterday, to see if the Hilltop Mall is feasible for my indoor pacing and maybe casual shopping purposes.

Richmond is about twenty minutes north of me, in the corner between San Francisco Bay and San Pablo Bay. It was a town that quickly grew during World War 2 because of the shipbuilding industry, and then slowly died out due to lack of industry and racial tensions after the war. It’s in a state of flux right now, an up-and-coming bedroom community for the bay area that’s seeing lots of townhouses and condos suddenly appear. I’m not that familiar with the area at all, and probably should be. The outer areas on the water are beautiful, and I’ve hiked in Point Pinole and checked out the ship museum at Marina Bay. But I’ve never explored the mall at Hilltop.

Hilltop Mall was built in 1976 by redeveloping what used to be a Chevron oil tank farm. It is a beautiful location, a circular peak almost like a cupola in the hills. It’s a two-story mall with 1.1 million square feet of retail space. (Indiana folks: for reference, UP mall is 922Ksqft.) It’s another Taubman-designed mall, similar to Stoneridge in Pleasanton. Anchors include Sears, Macy’s, JC Penney, and Wal-Mart.

The first thing I saw when arriving, the true sign of a dead mall, was the police satellite station and many conspicuous “if you see something, say something,” “lock up your belongings,” and “private property – we reserve the right to kick you out” signs. The exterior or the mall is very 1976, with few updates. It’s very heavy brick and tan-painted stucco and concrete. It reminds me of Concord Mall in that aspect. There’s also a thick ring of parking lot lining the rim of the mall, with the asphalt tarmac largely barren of cars. The outer perimeter is built up with tons of newish townhouses. There are almost no outbuildings and absolutely no chain restaurants on the outer perimeter of the mall.

The interior of the mall is extremely dated, and has every trademark of a Taubman mall that was probably lightly updated around 1990 during those peak mall years. It was bought by Simon in 2007, and pretty much left to die after that. There are high arched ceilings with lots of skylights, but the narrow fingers reaching from the main mall atrium to the parking lots are all dimly lit and filled with vacant stores.

And yes, there are vacancies. There are about 150 spaces in the mall, and probably about 90-some occupied. But a lot of the stores are low-traffic, low-rent places, low-end clothing stores, cheap wireless places with basically no stock, empty military recruiting stations. There was some sparse foot traffic on a January Saturday afternoon, but not a lot. I’ve seen malls much worse, but this was fairly bad. Hilltop is tucked away from the highway a bit, and there’s zero foot traffic from nearby towns or residences. There are no grocery stores or external fast food or banking that would pull in crowds. And there are few stores that would attract any people. There were a couple of shoe places. Not much more.

The mall’s bones are interesting. I like the high arched ceilings, and the flow of the upper floor concourse, which is classic Taubman design. But it was incredibly dated and in dire need of a refresh, or even basic maintenance. White ceilings were yellow, with brown water stains from roof leaks. Trim was frayed and missing. Light bulbs were either turned off or dead. And the floors were a disaster, the tile looking like an outdoor bathroom in an Arco gas station. The entire mall had the faint smell of mildewed carpet that should have ben torn out and replaced in 1979. It was far beyond dated. One interesting point is that the center of the mall has a large, colorful merry-go-round, and a spiral ramp to get between the two levels that looks straight out of a 80s sci-fi movie. Good photo potential there.

The anchors were all in rough shape. Sears is obviously on life support, but this one seemed even worse than normal. The Sears was added in 1990, and looks as if it was never updated. Macy’s was Macy’s. I used to think of the Federated-owned store as being top-of-the-heap high-end department store, but their merchandising looks cheap these days. JC Penney was okay, but it had a large vacant furniture store that looked as if it hadn’t sold a couch since the Reagan years.

The oddest thing was the Wal-Mart anchor. It used to be a Capwell’s back in the day, which morphed into Emporium, then was bought by Federated. Instead of running two Macy’s stores (like they do at other locations, like Stoneridge), they consolidated everything into the one Macy’s, and left the old anchor empty for years. Wal-Mart then took it over about ten years ago. It’s a really odd jury-rigged store, which looks like an old two-story LS Ayres from the seventies, with WMT signs hastily nailed onto the beige exterior. The upper floor mall entrance was blocked with painted plywood. It’s unusual to see a two-story Wal-Mart, or one that faces into a mall. I’m also used to seeing them in purpose-built structures that are all identical, and not crammed into a repurposed department store. The Wal-Mart had a fair amount of traffic, which was the good news. The bad news was it was the most randomly laid-out and sketchy looking store of theirs I’d ever seen. I don’t shop at Wal-Mart, and I’m not that familiar with the stores, but this one was a parade of sadness.

The food situation was pretty bad. There was not a real food court, just a few piecemeal non-chain restaurants, like a Mongolian grill and a teriyaki place. Subway and BK, of course. I was starving, but left without eating, because I didn’t want to catch bacterial meningitis.

High point of the mall was their large 24-hour Fitness, which was practically full. Lots of new machines, every one in use. Thirty bucks a month.

Hilltop was bought by Simon in 2007 as a package deal, who bought every area mall from The Mills Corporation. Simon later defaulted on their loans in like 2012, and Jones Lang Lasalle manages it now. (I think it’s still owned by US Bank, representing the financiers of the original 2007 buyout.) Last year, they listed the mall for sale, and it will almost certainly get demolished for some mixed-use development. It’s the perfect place, close to the I-80, for a planned community with a fake town center and some light retail.

Anyway, got a good 30 minutes of walking in, and of course by the time I was done, the weather cleared and it was beautiful out. Here’s a quick Flickr album of a dozen pics snapped with my phone: https://flic.kr/s/aHskQsQ4P1