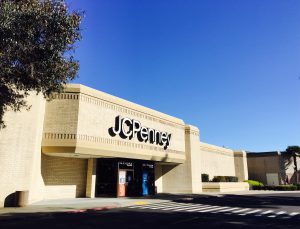 I had yesterday and today off, and I was bored of walking in my neighborhood, so I drove to the nearest mall, like an honest-to-satan mall mall, and not a bunch of stores next to each other with a fake city square in the middle of it.

The closest mall to me is in Pleasanton, about thirty minutes south/southeast of here. There’s a Westbrook mall in San Francisco, probably technically the same distance away, but it’s tucked into the city and not the same experience as being in a suburban freestanding mall.

Stoneridge Shopping Center is the perfect example of a healthy and well-operating Simon mall. It’s got about 160 stores and four anchors (JCPenney, Macy’s, Nordstrom, Sears), with almost no vacancies. It was originally designed by A. Alfred Taubman, and it has the same look and feel as some of his other malls. I’ve been to Short Hills mall in New Jersey and Cherry Creek mall in Denver, and the interior has the same feeling and flow to it.

Walking around this place is a real mindfuck for me. First, it resembles University Park mall’s exterior, the way JC Penney and its champagne-colored brick juts out from the mall proper and Macy’s is around the corner. A parking lot wraps around the mall, the north side a level higher than the south, with stairsteps going down the evergreen-covered ridges. The mall sits in a bowl created by the Pleasanton ridge on the west horizon, and the 580 and 680 highways to the north and west. The exterior is decidedly Californian, and far more suburban than the rest of the Bay Area.

But walking the concourse inside — it’s very easy for me to get lost in the nostalgia of the place. It feels like a direct time machine to being in the late 90s in the Seattle area, shopping at Northgate, or Lloyd Center in Portland. And being there in the late morning, right before the Christmas holiday season, brings back old and strange memories for me, of stocking up new shipments when I worked at Wards, hauling out the lawn tractors for storage and setting up the Christmas trees.

There’s something hypnotic about the dead lull at about 11:00 on a weekday in a mall. It reminds me of the times I spent at IUSB, when I would skip class and drive to Scottsdale or University Park to hit the record stores and arcades. The only people there would be the career mall workers, the day shift people, along with a few geriatrics walking the loop, and maybe a mom or two with strollered kids. Everyone else was at work, at their jobs in the factories, and I would have the place to myself, like a post-apocalyptic movie. I like seeing a mall busy at night with holiday traffic, but having the place to myself always felt great.

Malls have a secret life few people see, like the hour before they open, when you see all the assistant managers walking to the bank with their locked up money pouches and drop boxes, stopping to get coffee, talking to the other lifers about the coming onslaught. I liked when I worked the 6AM truck unloading shift, and after unfucking 45 feet of furniture from the Franklin Park warehouse, I’d get a few minutes to go to the pretzel stand and get enough caffeine to finish the next trailer full of stereos and mattresses. Working in a mall paid nothing, even back in those peak mall days of the late 80s/early 90s, but it was a nice routine.

Now, finding a mall like this is a huge nostalgia trigger. I don’t really have anything I want to buy at a mall (other than pretzel dogs, which I really can’t have) but I really enjoy the walking, the people-watching, and the general atmosphere. And like I said, it’s a huge time machine that sends me back twenty years. It’s unfortunate, because malls are dead and dying, but when I get a change to spent an hour in one, it’s almost restorative to me. I know this isn’t very edgy and absurd and punk rock, but it’s a thing. I wish we had a place like this closer to my house. I should probably take more pictures before this one goes away.