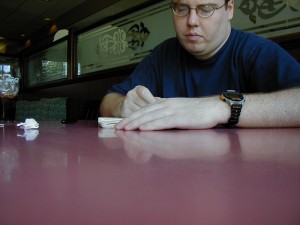 It’s been like a month since I’ve made any kind of update here, which can only mean one of two things: I decided to go to Mexico and write about the drug trade, and got myself killed by Narcoterrorists, or I’m deep in the middle of writing a book and feel all of my energy has to go there.  And it’s the latter, this time.  So there.

I think I have a title for this book.  I think it’s close to done, but I now need to read it four times and find all of the mistakes.  It’s what you would call in the software world feature complete.  Maybe not, but close.  I’m pretty sick of it right now, which is a good sign that I’m done with it.  So there’s that.

I don’t remember why, but I pulled out one of my paper journals the other day and read it.   I journaled obsessively in spiral notebooks from the end of 1993 up until a couple of years ago, at which point it sort of fell off, as my life became far too boring to chronicle, and all of my energy went into other writing projects.  I regret that, and wish I would have done what I did for years, filling at least a page per day of a standard college-rule notebook.  I was reading this journal from 1996, which was amazing.  I guess I consider that a non-year of sorts, because it wasn’t as big of a deal as 1995, when I moved to Seattle, or 1999, when I moved to New York.  1996 was the start of a pretty relaxing period for me, with a steady job and a steady girlfriend, a regular routine and most of my writing on autopilot.

But, reading the journal, I realize it wasn’t.  I was perpetually single at that point in life, and really struggling with meeting people in this new city.  I had a couple of out-at-second-date situations, and this one dating situation with a girl that went to U of W that absolutely crushed me.  I had all of this dental work done, and spent a lot of time chewing up mass amounts of Tylenol to combat the shoddy work this dentist did to my teeth.  And I really struggled with my first two books.  The grand total of this, by October or so, was a crippling depression, a near-suicidal run where I really didn’t know what I was doing and how I would come out of the other side.  It’s strange though, because when I look back at my history from a high level, I sort of remember going to a new shrink at that time, but mostly just remember leaving my first job and settling into a more 9 to 5 gig where all of my coworkers were older with kids, and that I mostly read a lot of books and published a zine.

What’s really interesting to me about this period is all of the entries I have surrounding Rumored to Exist.  First, there was a lot of puling about the direction the book was taking, and the challenges involved in writing it.  There’s one set of entries, which maybe I should scan, which is a long numbered list of all of the problems I had at the time with the writing, and what needed to be resolved before I could continue.  And then a week later was an entry talking about why I needed to kill the whole project.  And a week or two after that was a post talking about how I’d completely restructured the book.  This continued for something like six years, so the feeling that I’m in over my head on an endless road with this book I’ve been kicking around for about 9 months doesn’t feel so bad to me.

Speaking of, I should get back to it.  I would really like to wrap this thing up in the next few weeks.  Stay tuned.