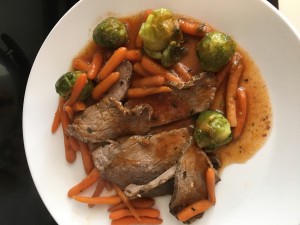 I am lazy. I can cook, but given the choice, I don’t. That means either I eat sad microwave dinners, or I go out to eat, and eat too much. That has been catching up to me, and I had to do something out of desperation. I wanted to get those Zone delivery meals, where they  cook everything and measure it out and do it to a certain nutritional profile, and then deliver them every day. I think if I was given three pre-portioned meals a day and told to eat just that, I’d be fine.

The big problem with this is that most Zone delivery things cost roughly as much as my mortgage. They also usually use their own delivery people, which means they will 100% get lost or not be able to get in my building. (Case in point: Amazon Logistics always fucks up deliveries here.) And some of the food delivery things have some flexibility with getting less than 21 meals a week, but some don’t.

I thought about Blue Apron, since they advertise constantly, and a bunch of people won’t shut the fuck up about them. But those involve cooking, and they’re more for two people, and my wife doesn’t eat. So that was out.

I finally found Freshly, which seemed to fit the bill. They delivered with FedEx, packed in ice. They have meal plans of 6, 9, 12, or 21 meals a week, which you pick from their rotating menu. They list ingredients and nutritional information. And their web site did not look that impossible to use.

I tried this out with the 9-meal plan. I did not need breakfast, since I have oatmeal each day. I also left some dead space for weekends or going out for lunch once in the week. 9 meals, including shipping, was $99.

First, packaging was interesting. The meals came in a cardboard box, which was lined with some padded stuff which is actually recycled jean denim, wrapped in brown paper. Then inside that were alternating packs of white plastic containing a frozen gel, along with the individual meal trays. Each meal tray was in a cardboard sleeve with nutritional info, then was a standard black plastic bottom/clear plastic wrap sealed top. 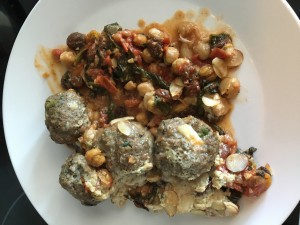 The food was all made with minimal ingredients, no preservatives. I generally don’t care about that either way, but it was all fresh, not frozen. There was zero prep involved: poke holes in the top, nuke for two minutes, done. I plated them after cooking, but that’s it. No flavor packets or mixing or anything else. It’s just prepared food in a plastic tray.

The meals I had ranged from pretty decent to excellent. Each one was protein-centric, with mostly carbs from vegetables and no sugar or starches. The best meal was a Lebanese meatball dish with spinach, chickpeas, tahini, and raisins. I would have easily eaten nine of those. There was also a beef provencal with brussels sprouts, and I absolutely hate brussels sprouts and I ate all of them. The first meal I ate was the most meh, a paleo toasted almond chicken. I wasn’t entirely into the coating, but even there, the chicken was perfectly done inside and not dry or knuckly or weird.

As far as ordering, their web site lets you choose what you’re going to get a week in advance. You can skip a week or throttle up/down from your chosen plan if you need to. If you did nothing, you’d get the same stuff as last week. It looks like it would be fairly easy to cancel the account if I needed to bail completely. (There’s a link at the bottom of the subscription settings page, so it’s not completely buried, or one of those things where you have to sit on hold for an hour.)

The one bummer about the whole experience is that the food expires fast. I got my meals on Thursday, and they were all marked best by Monday, and the weekend of eating out was in the middle of that. Their web site says you can freeze meals, but is really dodgy about it, saying some freeze better than others, but no specifics, and no instructions on the best way to thaw them. I froze two of the meals (a chili, and an asian steak) and they were not as on point as the rest of them, but were as decent as an average TV dinner. There’s no real way around this, other than maybe two deliveries a week, or knowing what freezes well and planning on that.

Other super minor gripe is there was no FedEx tracking number. That’s a big deal for me because every delivery person fucks things up, even though I am home all day, and it’s nice to feed the number into a delivery status app.

I ended up losing 3.3 pounds last week. I generally only lose weight from diet. I don’t subscribe to any belief on fad stuff like paleo or gluten-free or no-GMO or any of that. You eat more than you burn, you gain weight. That said, I also walked 36 miles last week, so there’s that. But I think having controlled portions to prevent me from gorging, and not having any bread or empty carbs helped most.

And the Amway part of the post: If you’re interested in trying this, go here: http://refer.freshly.com/s/7xqc7. Like I said, it’s not exactly cheap, and it’s not available coast-to-coast, either. But it’s been good for me so far.