In this episode, I talk to writer, publisher, musician, and lunch lady Ryan Werner. He is the author of Shake Away These Constant Days, Murmuration, If There’s Any Truth In a Northbound Train, and Soft. He plays guitar in Young Indian and numerous other bands. He also runs Passenger Side books.

In this episode, I talk to writer and poet Timothy Gager. He is the author of thirteen books of poetry and fiction, including his latest book of poetry, Chief Jay Strongbow is Real. He’s also the host of the Dire Literary Series in Cambridge, Massachusetts.

The RCA eBook reader: https://wiki.mobileread.com/wiki/REB_1100
Click here to for more details on this new episode of The Koncast

I’ve been obsessed with print lately, which is a real kick in the ass, because I sell almost no print books these days.  I can sometimes get a few people to kick in a buck to look at my stuff on the kindle, but sales of the dead tree counterparts have been absolutely abysmal.  If it wasn’t for the kindle, I’d probably be learning to crochet instead of still picking at this, so that’s a good thing, and I really do like it when people read my books regardless of price or format.  But there’s something about print books that really pulls at me.

I just read this book the other day, by RE/Search, which was essentially a two-hour phone interview of Henry Rollins by V. Vale.  Rollins had some good stuff to say, and it’s always fun to catch up with his projects.  But one of the things that made me really love this project was that it was a pocket book, a little 4×6 inch book, maybe 125 pages, but a little thing that felt good in your hands and just screamed “collectible” even if it was not an ultra-rare numbered limited edition.  There’s a certain tactile pleasure in having a book like this, and I don’t know what it is.  It’s small, and an odd size, not like the usual trade paperback.  Maybe it’s because it reminds me of a diary or a little book you’d get as a kid.  Maybe it’s the fact that it could go in a pocket easily, although I didn’t take it out of the house or bring it on the go with me.  But something about it made me appreciate it more than if it was an industry standard 5.06×7.81″ book.  It’s the reason I made the print version of Fistful of Pizza the size it is, although only a couple of you actually have a print version.  (The kindle strikes again!)

There are some issues with doing a perfect little book like this.  Lulu has a pocket size, which is 4.25×6.87.  The problem is that it’s Lulu, which means fulfillment is just a little bit off, and price is higher.  Createspace supposedly does custom trim sizes as small as 4×6″, although custom sizes are only available from amazon.com (which is fine – it’s not like a brick and mortar shop is custom-ordering my books.)  The only issue with that is POD books are always priced per page, regardless of their size.  So if you had a 40,000-word manuscript and you put it in a pocket book, it’s going to cost way more per copy than a 6×9″ book with the same font size, since there are going to be more pages in the pocket book due to fewer words per page.

I don’t even have ideas or projects for this crap; I just think of sizes and colors and formats and wish I could do something with them.  Like, I’d love to do either a DVD or a CD that was encased in a book.  I don’t know what I’d put on them — maybe some kind of spoken word experimental garbage.  Createspace has POD CD and DVD offerings, but they don’t have books or booklets.  It doesn’t matter, because I don’t know how to record a book on tape that doesn’t sound like hell, and I don’t know what I’d add to a book in color, other than pictures of my cat or something.  But it always has me thinking.

No, iUniverse isn’t going out of business.   (Well, maybe they are – I haven’t checked.)  I’ve just decided to pull my books from iUniverse.

I’ve done three books with them, and the idea of print on demand radically changed my writing career.  I mean, I have not made millions from it, but prior to the advent of PoD, I thought the only way I’d ever hold a printed copy of my book in my hands would be if I wrote a million agents and publishers and found one willing to print it, or if I payed thousands of dollars to fill my garage with a short print run, or maybe if I went to Kinko’s and printed my own copy.

Someone told me about iUniverse back in 99 or 2000, and this was around the time Summer Rain was close to done.  It was an incredibly revolutionary idea back then, this thought that I could get real copies of my book, and get them in Amazon and other book stores, and even have it so brick-and-mortar book stores (remember those?) could order copies through Ingram.

There were a couple of issues with PoD back then.  One was cost.  Summer Rain was incredibly expensive compared to the per-unit cost of offset printing a few thousand books.  There wasn’t the setup, and you didn’t have to produce a bunch of books at once and then warehouse them, which was awesome.  But selling a paperback book for thirty bucks was never easy.

The stigma was the worst part.  Back in 2000, everyone looked down at PoD as hackneyed and just another extension of vanity presses.  The party line was that real writers don’t self-publish, and you weren’t shit unless you had a book deal.  The irony of this is that the proponents of this attitude are the same people who can’t shut the fuck up about the kindle revolution.  (You know who I’m talking about.)  To some extent, this didn’t matter to me; I had a copy of my book on my shelf at home, and friends could buy it and read it, and people enjoyed the work.  That’s all that ultimately matters to me, but there was still a nagging feeling in the back of my head when the “real” writers talked shit about self-publishing.

I also didn’t have high hopes that PoD publishing would reap all of the rewards that getting a book deal with a Big 6 publisher would.  There was a lot of PoD backlash from people who dumped a book onto a PoD publisher, and then bitched and moaned when it didn’t take off.  I never saw iUniverse as anything more than a printer, and didn’t expect them to do anything more than fulfillment.  But some people thought you would just upload your PDF and your book would suddenly take off like a Dan Brown release.  Truth is, PoD involves just as much hustle as printing off copies yourself and trying to sell them one by one.

So, why am I dumping iUniverse?  A few reasons:

So I wrote a letter to iUniverse and pulled my books.  (Seriously, a letter?)  There are currently only three books on there: Summer Rain, Rumored, and Tell Me a Story About the Devil, which is a journal archive from 97-99 that none of you ever bought.  The first two are already moved to Amazon/createspace.  The last one can die on the vine.  If you’re really desperate to get any of the iUniverse editions before they go away, I think you probably have a few days to grab them.  But the newer versions are not only better, but cheaper.

Next up will be hemming and hawing about what to do with all of my books on lulu, and if they should also get moved.  I should probably stop screwing with all of this and actually write new books, though. 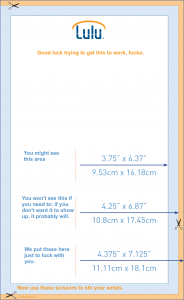