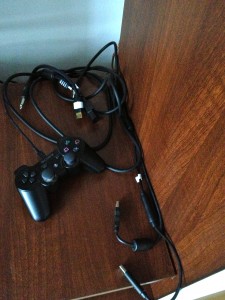 God damn it. It is broken. Again.

My PS3 is in a shop somewhere in Missouri, getting the yellow light of death beaten out of it. It went south in November and got all of the solder stripped away, the whole mess ultrasonically cleaned, then reflowed. Or something. Now it is dead again.

I am at an deadlock with this new book. 100,000 words and I don’t even know what it is about, what order things should happen. I feel like that scene in the Naked Lunch movie where Ginsberg and Kerouac show up in Tangiers and Burroughs is strung out on junk, unaware that his apartment is filled with notes and routines that would later become his most popular book, but it’s this fucked mass of scribbles and jumbles.  I wish I had a Ginsberg that would show up and unfuck this book.  I keep at it though — it will eventually make sense.

This is the time where I would fire up Black Ops and walk away for a bit, let things ferment.  This is what’s staring at me when I want to do this: loose cables and a controller hooked up to nothing.

I have this sick attachment to this PS3, a heavy nostalgia, because back in 2007, when S worked 80 hours a week and I was jobless, I spent hours and hours writing this book I never finished, and working for a friend’s startup for free.  But then as day became night, I would fire up this PS3 and play it for hours.  I formed this stupid emotional bond for a piece of hardware that would someday become obsolete, someday die.  I sometimes fall in these deep nostalgic k-holes for the recent past and think about Denver a lot, and one of the top five things in those memories involve this black monolith of a video game system, which is why I struggle to keep it alive and UPS it to some dude in Missouri to get it re-repaired.

I have all of these dumb games for the iPad, but that’s just tapping on a screen.  The PlayStation creates these immersive worlds I get lost in for hours.  Back when Vice City came out, I would play it for hours, like it was my full-time job.  I’d come home from work on a Friday night, order a pizza, and fire up the machine, just to wander, to get a motorcycle and drive through neighborhoods and try to jump off of stuff, watch the people walking, find secret entrances or ways to climb on rooftops.  This was after I finished Rumored, when I was in a funk about dating and meeting people, when that postpartum depression after finishing a big book really kicked my ass.  I’d hole up in my Astoria apartment for entire weekends, at the DualShock controller.  It wasn’t healthy, and it wasn’t productive, but it was.

I can’t do that anymore, but I sometimes wish I could.  I should probably ignore this and get back to this goddamn book.