The other night, in a bit of irony, I watched the movie The Last Blockbuster by renting it on my Apple TV. It was a cute dose of nostalgia, talking about the last remaining store of the once-mighty video rental empire, out in Bend, Oregon.

As I started writing this, I realized I already wrote an article on The Death of Blockbuster last year, and hit pretty much all of my points there. The movie covers all of this, more or less, except they get Kevin Smith, Brian Posehn, and a few others to talk about it. I think they let corporate Blockbuster off a little easy here. People need to remember that Blockbuster was essentially the Amazon of the 90s, and decimated the mom-and-pop stores with their almost monopoly and tight ties with big studios. And if you wanted to rent weirdo disgusting zombie films with a lot of skin (17-year-old me, guilty) you couldn’t find them at Blockbuster.

One other thing that resonated with me is that Bend reminds me vaguely of Longview, Washington. It’s twice as big, but it’s got the same sort of small-town main street feel, with a few loose strands of suburb hanging off of it. They both sit on a river, with lots of evergreens and the mountains in the background. The reason this is nostalgic is that in 96, 97, I was dating a woman who lived in Longview, and every weekend I’d drive into town and we had the same ritual: pick up a pizza from Papa Murphy’s, go to the video store, walk the rows of films, pick out one or two we both like, and maybe one for me. Bend in 2020 distantly reminds me of Longview in 1996, and has the same cozy, sleepy feel to it. The documentary fixates a bit on the celebrity of the shop’s owner, as the last-Blockbuster cred went viral. But in the glimpses of how the family ran the business, it really reminded me of that past era.

I also have this stupid theory I haven’t entirely fleshed out that the total lack of empathy in this country is at least partly related to the death of retail and the lack of personal relationships in media consumption. I love buying all of my music instantly, but I also feel like I was more of a human being when I would interact with a salesperson on a weekly basis in a record store, when I had a relationship with someone that involved not just handing over a credit card, but talking to a human being about my likes and their advice and suggestions. I think with the beginning of the hypermart, consumers developed this lack of empathy and low-level depression from so many choices and so much homogenization and a lack of actual retail sales people. And in a perfect storm, retailers fed directly into it. It was perfect for the retailers because it meant they depended less on expensive human labor, just the line of cashiers at the front of the mega-store (and then they experimented with getting rid of them.) But also consumers felt a need to shop more and fill that hole in their soul. Now we all click endlessly on the Buy it Now button and feel worse and worse. This might be a dumb theory (I remember 30 years ago dealing with asshole customers aplenty) but maybe it’s something I need to pick in my head a bit.

Anyway, you can find the movie’s web site here: https://www.lastblockbustermovie.com. They will sell you the DVD and allegedly will be doing a limited-edition VHS, if you happen to still have a working deck. 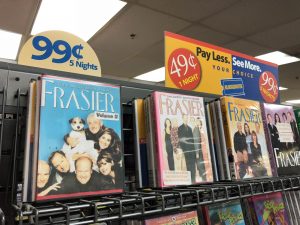