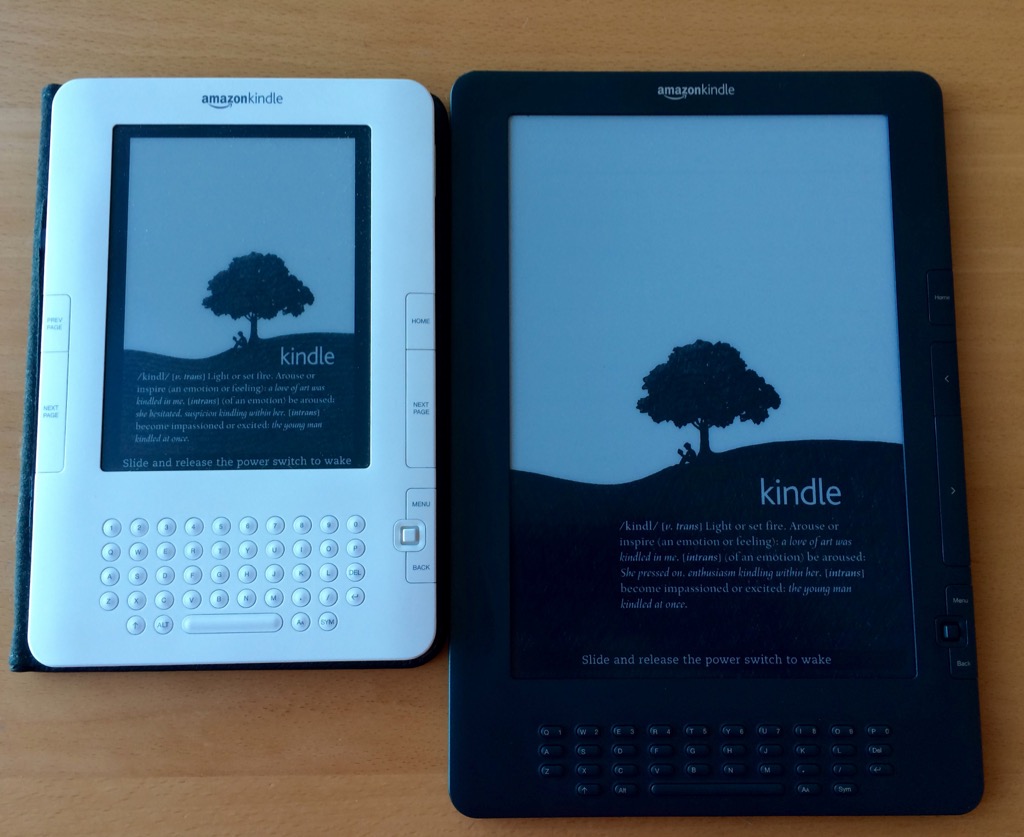 I bought a new Kindle, but an old Kindle. It’s actually a Kindle DX, the large-screen variety, which is long discontinued, but for some reason, Amazon occasionally has them in stock, through “Amazon Warehouse,” whatever that is.

I am not really a fan of ebooks. I gave it an honest go back in 2010 or so, bought a lot of my favorite published authors at crazy markup prices, like buying Vonnegut classics at ten bucks a pop. But I found reading fiction to be difficult on a Kindle. Because everything is the same font, and the device always has the same feel, the same heft in your hand, it removes the experience of reading the book, and I typically retain nothing I read on a Kindle. I went back to paper, and I’m fine with that, mostly. There are more titles available, it’s often cheaper in the long run, and there’s something about going to a physical book store that I miss when I’m simply e-hoarding books online.

But, there’s a big problem with space, and allergies. I’m finding that old books, ones infested with dust and mites, make me incredibly sick. I simply cannot buy a fifty-year-old paperback from a used book store, because the moment I open the browning pages, I have a horrible allergy attack. Yes, I take the medicine and I get the shots, but I’ve pretty much exhausted the medical possibilities. I just can’t read old books. And now, I’m finding my “new” books are all old. I pulled a Kerouac book of letters the other day, just for a quick skim, and it made me sick. And I “just” bought that book, but when I checked the receipt stashed inside, and it’s twenty years old. So I don’t know what to do about that.

It’s nice to not have the clutter involved with collections. I was religious about collecting CDs and DVDs, and they took up a good amount of my apartment when I was single. After I got married, and after the technology of MP3s and streaming video took off, I ripped everything, and junked or stored away all optical media. I don’t really miss it, and I’m glad I have the space. But books are more difficult for me.

I have issues with current e-readers, too. I love e-ink displays. The first few iterations of Kindle had less refined screens, a lower PPI count, the weird black-flashing issue with a slow refresh speed, and some slight ghosting of old images. There are new ones with higher PPI, better resolution, and backlighting. But they’re all the smaller screens. As my eyes go, I really want a big screen. Ideally, I would want an 8.5×11 screen. This also helps with PDFs, which you really want to not get downscaled or zoomed weird.

But, the big-screen e-ink readers just don’t exist. Sony has one in Japan, that’s insanely expensive, like $800 or something. And there are one or two cheapie made-in-China ones that are half-broke, hard to buy, and still pretty pricy. Every year, there are CES rumors of a big-screen reader, but these are always vaporware, and — huge pet peeve of mine — put out the idea that there are big-screen readers. But what you see at CES is never what you get, and they simply aren’t out there.

I don’t think the masses want a paperwhite e-ink display. They want a tablet, something like an iPad that can play games, show a video, and do things best left to a color screen that eats batteries. I have an iPad, and they’re great, but I can’t read on it. It causes too much eyestrain, and I’m also convinced that heavy use of a screen right before bed causes bad sleep hygiene. Almost all of my reading takes place in the hour or two before sleep, so I can’t deal with an iPad. That’s where paper has been great, and where a big e-ink display could be helpful.

So I hunted down the Kindle DX, and I found this one on Amazon. It was only $140, which was a steal, compared to the original $400-ish list price five years ago. This is the Kindle DX Graphite, which has the 3G connection, no WiFi, and the second-gen DX display, which is “50% improved.” It has roughly the same lineage as the third-gen Kindle Keyboard, but less RAM inside. No backlighting, no apps, no touchscreen.

Although the Amazon page made it sound like this was a used model or maybe a refurb, this was a new-in-sealed-box model, with plastic on it and everything. The only snags I found was that it did not come with an AC adaptor, just the USB cable. (Not a problem, I have 784 110V-to-USB adapters around here.) But it also would not register to the Whispernet network, and the wireless appeared dead. I gave them a call, they asked me for the serial number and a few other things (IMEI, something else) and then after a reboot, it connected wirelessly and all my stuff was ready to go.

My main use for this, at least initially, is to read PDFs. I have a giant archive of UFO docs and conspiracy theory stuff, FOIA requests and declassified government reports, and it will be nice to plop all those onto this thing. The screen is 5.5×8, so almost the size of a paperback book. It’s much easier to read than the original one I have. So I will give it another go.

It’s oddly nostalgic for me to look back at the documents that were waiting for me on the Kindle. I got my original Kindle in 2009, and toward the end of my Samsung tenure, spent a lot of my lunch time reading science fiction books on it. Also, when I started my allergy shot regimen in 2010, I would bring the Kindle and get a lot of reading done there. I had horrible writer’s block then, didn’t know what would be next for my writing, so I was reading a lot of Philip K. Dick books for inspiration, and also a lot of schlocky how-to-write books, which were useless. The Kindle font, and the general layout of the thing, the dark grey letters and the LCD-like background color, remind me so much of reading those books. But I can’t really remember much about them. So, we’ll see how this works out.