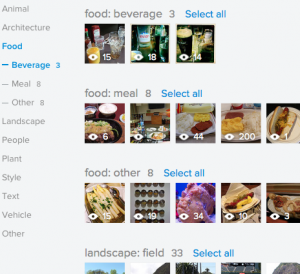 Flickr now has a feature called Magic View. If you go to your Camera Roll view, there is a slider at the top that defaults to Date Taken, but you can toggle it to Magic View mode, which groups together photos into various object categories.

My Google Photos uploader worked away all weekend, eventually transferring about 27,000 unedited photos to their cloud. The Assistant wizard is still churning away, sending me various alerts as it groups together things into animations or “stories.” I only have about 10,000 photos on Flickr, because I use it as a repository of public albums of sorted and edited photos, and not a complete bucket of everything I take. But there’s enough there to compare the two.

In general, Flickr is way better at auto-categorizing things. For example, I take a lot of pictures of my cats. If they are at all blurry, or the cats are wearing a costume (don’t judge), they are categorized by Google as dogs. My long-haired cat got identified as a raccoon a bunch of times. I have a category called “Race Tracks” on Google, which consists of pictures of stalled traffic on the Bay Bridge, and baseball diamonds. I also have a category named “Football” that is pictures of swimming pools and people in the desert. Flickr isn’t perfect; it thinks snowmobiles are bikes, and thinks a lot of old Las Vegas is an amusement park.  (Maybe it is, from a metaphorical standpoint.) But Flickr seems to be a bit better for me.

Flickr has some interesting categorizations. One I like is a “style” category, that identifies things like pictures with strong depth-of-field or abstract composition. Google has some other interesting concrete categorizations, like taking a stab at identifying when something is a wedding, art museum, or concert.  (Although for me it also grouped proms, hotel lobbies, and night portraits in those respective buckets.)

Google does group by people, place, and thing, and the first two of those are mostly absent from Flickr. Flickr does no facial recognition, but the Photos software by Google only groups your like-faced photos with no identifying tags, just within your photos, so it’s not as accurate, and gives you no way to label a collection as being a person, like you could in iPhoto, Picasa/G+, or Facebook.  Flickr can store geo data and group your photos on a map, but that’s a different interface, and it’s slightly clunky. It would be nice to see a list of cities/countries with all of my photos in that location. I guess it’s possible to write an app to do that, or maybe somebody has.

Flickr also doesn’t do any of the Assistant things that Google does, like auto-stitching photos into panoramas, or making “Stories,” which are slideshows from auto-curated chunks of photos spanning multiple albums.  These can be pretty goofy, though, especially because there’s no metadata or context to things you’ve mass-dumped into Google Photos. Like I have these stories titled “Ten Days in Oakland” that are assembled-together slideshows of crap I saw at the grocery store.

This further brings up the issue of using a cloud service like this as a private cache of everything I’ve taken, versus a public set of edited photos. I use my phone as an extension of my memory, and I’m always snapping pictures of notes or grocery lists or things I need to remember. I also try to document things only I’m interested in, because I know that now I wish I would have taken more photos of things in the past so I could go through them now when writing or sinking into a pit of nostalgia. I don’t want those to be public, but it might sometimes be interesting to have them grouped. I might continue mirroring photos on Google, but keeping everything public on Flickr.

Oh, in case you’re curious, I’m on flickr at https://www.flickr.com/people/jkonrath/

[2020 update: of course they removed this feature a year or two ago.]