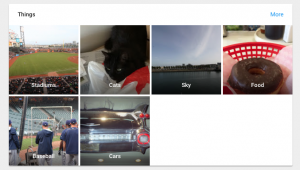 Anyone else here trying out Google’s new Photos thing?

They announced this new service the other day, a “gmail for photos.” Traditionally, Picasa had a quota, like any other cloud photo storage service, and then you paid for more space. Now, they offer an unlimited amount of storage for free. Also, unlike G+, this isn’t a place for you to simply share photos and make them public; by default, photos (and videos) are made private, and then you choose to share them if you want.

The interesting part to me is that Google is adding various features to automatically categorize or clump together photos. The obvious one is that it will create virtual collections of places, like when you dump all of your geo-tagged photos into one clump. But the other neat thing is that it guesses at other categorization. For example, I had categories magically show up for food, cats, baseball, stadiums, and sky. Your photos are still maintained in a chronological order, just a “firehose” dumping ground, like throwing everything into a folder, but it does this smart collection thing on its own. You can also sort and create collections, and share those, but I’m mostly interested in what it can do without my interaction.

It’s not entirely clear if the original resolution photo is being kept, or if it is hosted. There’s some vague language saying that under 16MP files are kept in the original form. I think it’s serving up compressed versions of them, but you can get at the original (under-16MP) ones if you need them.

I haven’t thought out fully how this would land within my workflow. I keep everything on my computer in Lightroom, which is backed up wholesale to CrashPlan and locally, and then sort through and make collections that are then shared to Flickr. In my head, here are some brief comparisons I could think of:

I haven’t messed with the mobile app yet, but this seems like it could be a good solution for the person who only takes pictures on their phone or tablet, and don’t want to sync with a PC at all.  They have a Mac (and I assume Windows) uploader program that you can set loose on one or more directories, an iPhoto library, or any inserted cards/phones to upload the images.

My current game plan is to keep my workflow as before: import my cards/cameras to a Lightroom master catalog, and import from my iPhone and iPad when physically plugged in. Then I’ll create collections, edit, and share to Flickr. But I’ll also upload to Google Photos in the background from my laptop, mirroring my LightRoom masters directory. When I need to one-off mail a picture, I can do that. I also mostly want a way to look at my entire collection when I’m not at my computer, without keeping 30,000 photos on my phone.

One thing suspiciously missing (and this may be on purpose) is that there’s no way to embed a photo from Google Photos into a page here or elsewhere. That would be awesome, to drop a google link in an image tag on this blog, and have Google host it up instead of me. But I could see why they would leave that out on purpose.

Anyway, photos.google.com. Try it out, let me know if it works for you.