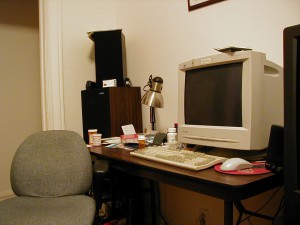 This site has been here, in one form another, for 17 years now.

In 1997, I got together a couple of half-baked elisp scripts and installed them on my shell account over at Speakeasy. This was before the word ‘blog’ was invented.  Mark Zuckerberg was 13 and Facebook was nowhere near an idea yet.  Social networking consisted of AOL chat and not much more.  56K modems were just hitting the scene, and some people had moved up to 800×600 screens.  Google didn’t exist, and everyone used Alta Vista.  There were about a million and a half web sites, compared to the three billion we have in 2014.

Back then, WordPress was not an option. LiveJournal had not been invented. Blogger would not launch for a few more years.  But I wanted to keep an online journal somehow.  My friend Bill Perry helped me come up with a script in emacs so I could hit a key combo and it would open up a file, named with that day’s date, with all of the HTML at the top and bottom of the page, so I could easily type that day’s entry and have a page per day.  I then wrote the world’s shittiest C program to generate the index, which sat in the left frame of the page.  (Remember frames?  Shit.)  My goal was to telnet into Speakeasy every day, and use my lunch hour to practice writing, with little public entries about current projects or observations or whatever was going on in Seattle.  I’d have no way to write about my travels – laptops were huge and expensive; mobile internet was not a thing; phones were giant bricks; PDAs were either being figured out or were the Apple Newton.  And photos were not much of an option, unless I took them with my 35mm, scanned them with a scanner I did not own, and then smashed and flattened them so they’d download on a slow modem.  Text was king, and my plan was to keep writing short essays and updates, even if my life was boring and I didn’t have some hook or theme to the whole thing.

After I moved to New York in 1999, blogs became A Thing.  I resisted calling this a blog for a long time.  (“It’s a journal!”)  Teenagers started livejournals.  The Blogosphere happened. Due to the Iraq war and W and all of that, the news cycle became bloggy or gave blogs legitimacy or whatever.  Every engineer that got laid off during the 2000 NASDAQ crash and bubble bursting started a blog company and then sold it to Google for millions.  Professional blogging became a job.  All of these niche blogs happened, and if you were a twenty-something and had a quirky blog and were a Cool Kid, you’d get a book deal to scrape your text into print.  Maybe it would become a movie.  (A blog where someone cooks all of the crap in a cookbook?  Really?)

I had good years and bad years of blogging.  There were a couple of times I stopped, and went dark.  (1998, 2000)  There were years I barely entered anything.  And there were years where I had daily entries, huge essays, long trip reports, and pieces of fiction that ended up in books.  I did a book of blog entries from 1997-1999.  I like it, but nobody bought it.  (It’s out of print now.)  I often thought about doing another book, but the blog-to-book model is annoying to me, and nobody buys my books anyway, so it’s not worth the time.  I often struggle with what to write here and feel bad that I don’t blaze away daily like I did ten years ago, but I eventually do come back.

Those scripts went away a few years ago, and I switched to using WordPress.  And I eventually stopped resisting the term blog, although I did it just in time for blogs to be dead.  I guess I still have some readers here, but it hasn’t been about monetizing this, and it’s never been my main writing project.  It’s not here to sell my books (it doesn’t) and it doesn’t get the attention my other writing does.  But it’s been around long enough that it isn’t going anywhere.  Even if the blogging culture fully dies and everyone spends time on some new site where you just record a grunt and exchange them with friends who grunt back, I’ll still be here typing.

But yeah, 17 really puts the zap on things.  I remember when I was 17.  A lot of people I know were still shitting in diapers in 1997.  And there’s this strange wave of 90s nostalgia, a “hey, remember…” movement for a time that feels like it was a week ago to me.  Time’s strange.