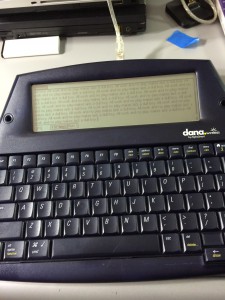 It has been impossible for me to write lately without spending time fucking around, checking the web, reading through old email, whatever. So I am trying something new: writing on an AlphaSmart Dana word processor.

The Dana is essentially an overgrown Palm Pilot, glued to a full-sized keyboard.  It has a monochrome touch screen that’s about as big as two iPhone displays next to each other, and no moving parts other than the keyboard.  There’s some amount of flash memory inside, and two SD card slots.  It runs on AA batteries, which last about 25 hours, or you can use a rechargeable battery stick.  A USB plug on the back can charge it and lets you hook it up to a computer.

Because it runs PalmOS, it can run old Palm apps.  But I don’t care about that, and haven’t messed with it.  It comes with its own word processor, and I only need to use that.  I don’t care about the address book or calendar or any of the other things on it.  The word processor holds eight files that you cycle through with the F-keys, and has some basic formatting stuff.  It also does word count, which is about all I really need.

The keyboard itself is pretty nice, full-sized without any weird key combinations.  The entire unit weighs about two pounds, and is wide enough that it can sit on your lap without any trouble.  It’s bigger than an iPad, but smaller than a MacBook Pro.  (Maybe it’s about the size of a MacBook Air.)  The keys do have limited travel, but it’s about like typing on a Dell laptop. The screen itself isn’t great, but it’s functional.  I’m a little worried about looking down at it, since I have a bad neck, but I guess I can not look at it when I’m typing.  The touch screen is the kind that needs a stylus, and I’ve forgotten how much the old Palm screens suck, compared to a modern capacitive-touch glass screen.  The backlight is also the greenish kind the Palm had, which is not great and eats batteries, but it’s there if you are on a plane or in the dark.

The coolest thing about the Dana is how you get files to your computer.  It has an IRDA blaster for IR, not that any computer I have can use IRDA anymore.  You could also pop out the SD cards and put them in your computer, but I think it saves files in the *.PDB format, which would involve some dickery to convert them to something I could use.  You can also set up Palm Sync and sync the docs that way, but I don’t even know if they make Mavericks-compatible sync software anymore.  There are other word processors out there for Palm, and software on the Mac end to futz with it, but forget all of that.  I want it to just work, and it does.

Here’s the deal: when you hook this up to your computer, it looks like it’s a USB keyboard. You open a blank document on your computer, press a sync button on the Dana, and it beams over the current word processor document, as if the Dana is phantom typing it into your computer.  It takes a minute, but it dumps it straight into Scrivener (or Pages, or Word, or WordPress or whatever you have open) with no fuss.  I sat down yesterday and banged out a thousand-word journal entry, plugged it in, and done.

This doesn’t support a way to round-trip files back to the unit, but I don’t care about editing. I just want a text capture device, a way to sit in bed or on the couch, go into a trance state, and blow through the words, dumping them into a buffer.  It’s getting harder and harder for me to do this with old emails and book sales figures and wikipedia and everything else a click away.  I’ve tried turning off wireless, and installing blocker programs, but then I just end up reading through old files from 1997 or looking at old books of mine, and can’t get started.  So maybe this will work.

I thought about getting an actual typewriter, a Smith-Corona or whatever, but I don’t have an easy way to get the files into the computer, other than OCR scanning, which sucks.  Handwriting is an even worse proposition, unless I want to retype it, and I’d honestly rather slam my dick in a door repeatedly.  I’ve also thought about writing by dictation, but after listening to an hour of me saying “um um um” over and over, I’d jump off a bridge.  So this should work fine.

One thing that gets me about this is the Palm OS itself.  It reminds me so much of the late 90s and early 00s, my time with a Palm IIIx, standing on the subway reading early drafts of Rumored on the little screen and playing Dope Wars.  I tried writing with that, with a little clicky keyboard that folded up and was useless, and just journaling with the pen and the Graffiti function, which I never fully mastered.

I was just digging and found a backup of my Palm from 2002, a bunch of .pdb files.  I should figure out how to do something with them.