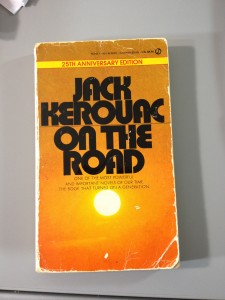 So I got infected with the Kerouac bug late, toward the end of college, when I fell out of the computer thing and suddenly needed to read everything I saw to learn how to write.  I locked into On the Road and loved it.  It wasn’t cool to love it – I don’t know what it was cool to read at that point in time, because I’ve never been cool.  But I liked the way the central character of the book wasn’t Dean or Sal as much as it was the blacktop-twisted terrain that made up the country between the two oceans, the open road, and how the change of seasons and passage of time was reflected in his prose.  There was also something I liked about the bond between friends, and the way these people lived on the fringes of a society that at the time was straighter than a stainless steel ruler.  I know everyone thinks of beatniks as 60s creatures, and maybe Kerouac as a 50s rebel, but this book was written about the late 40s, in the strange vacuum after the war, when a nation struggled to redefine itself, and quickly slid into a cold war.

I read a lot of Kerouac in the mid-90s, although I later got pulled into the Burroughs maze and then elsewhere, but I used to read OTR every time I travelled, be it a flight to the midwest, or a trade show in LA.  These voyages were far, far removed from what Kerouac did, but there was something relatable, the crossing of a continent, the worship of a road map, the feeling of watching the world pass you by, 65 miles an hour at a time, while you meditated and ruminated on the thoughts in your head.  And during those early years of my voyage into literature, Ginsberg was still knocking around, and he and Francis Coppola were screwing around with the idea of making this great book into a movie, which made everybody cringe with fear.  I remember them doing some blind casting call in New York, and the rumor mill churning with names like Brad Pitt and Johnny Depp.  And there was a part of me that wanted to see the film, especially since I did like Coppola’s work, and spent far too many times watching Apocalypse Now over and over and over.  But there was a much bigger part of me thinking, “don’t fuck this up.  Don’t make a hipster doofus Gap commercial out of this great book.”

The big problem with making OTR into a movie, regardless of director or producer, is how to condense this non-novel work into a flat, linear, two hour film.  We’re talking a 320-page book that consists of five parts, three giant roadtrips, and a hell of a lot of internal monologue and plotless “kicks” that relies a great deal on observations of a backdrop, rather than the plot-driven arc of a modern novel, which half the time is based on the formulaic plot arc of the typical movie, anyway.  Really the only two ways to do it is to try and compress and consolidate the scattered bits of adventure within the trips, making it into one or two action-packed blazing-fast roadtrips, or do a completely nonlinear, art-film collage of images and snapshots of the journeys, and hope that enough people who read the book would go to see it, and that you didn’t get skewered alive by people who are so ADD-addled that a Transformers sequel is not plot-driven enough for them.

I saw the movie yesterday, not really planning on it, because I honestly didn’t even know it was out yet.  And… it didn’t suck.  But it wasn’t incredible, either.

First, the film looked great.  Visually, it was astounding.  Walter Salles did a lot to capture The Road, the huge fields and pastures and ribbons of blacktop and canvasses of clouds and snow and rain and sun and everything else that makes America between the two coasts America.  And it was, for the most part period accurate.  I had fears they would recast this into a bunch of hipsters in the 2010s driving around in old ratted-out Ford coupes and saying “Daddy-o” a lot, some kind of Tarantino wet dream of old mixed into new.  And it wasn’t that.  It was the old Hudson and the old New York and San Francisco and Denver, done in such a way that it captured 1949 exactly.  I’m sure you could go over this frame-by-frame and find a doorknob that wasn’t manufactured before 1967 somewhere, but for the most part, it looked great.  And it was uncanny how some things fit the narrative so exactly.  Like there were many scenes were Sal and Dean were out on the fire escape of the Harlem coldwater flat, catching a smoke, and it looked and felt just like that famous picture of Kerouac on the roof of a New York apartment.  This all got nailed so exactly.

The acting was decent.  All of the main roles were competently done.  Garrett Hedlund was a decent Moriarity.  Tom Sturridge did okay with Ginsberg, and didn’t play him as a crazy zen hippy freak, but rather the Ginsberg he was before he devoted himself to that persona, when he struggled with who and what he was, which I really liked.  The only “known” actor to me was Kirsten Dunst, who you’d think would curse the whole thing, but she made a pretty believable Camille.

But…  something was missing, in a huge way.  The film just plodded along, from scene to scene, from season to season.  I could do it without a plot, but the touchstones weren’t there, something was missing from the movie, and it just had no soul.  If you didn’t have the book practically memorized going into this, you’d be hopelessly fucked. And if you did, you’d recognize the little scenes, and be able to piece it all together, but it would be like eating nothing but bread for dinner.  Even if it’s the best artisanal sourdough whateverthehell bread fresh out of the oven, and looked and smelled incredible, you’re still eating 137 minutes of bread and nothing else.

There were slight jabs at an agenda that bothered me, too.  I mean, when you put some distance to it, Neal Cassady was a stone cold asshole, a prick to the nth degree, dropping babies into every inviting crack he could find from Atlantic to Pacific, stealing and hustling and scamming and screwing and swindling from shore to shore and back.  Free to be you and me, but to anyone with a social conscience, this is pretty cringeworthy behavior.  And there’s been a small cottage industry of calling attention to this, led by Carolyn Cassady.  She wrote a book of memoirs called Off the Road, which painted the sordid picture of Neal and crew being a bunch of drunken assholes that left her and other women behind to fend for themselves.  And I’m not choosing sides here — I think she’s got a valid opinion here and think she’s entitled to it, and hearing about this side of the story made me that much less interested in Neal worship.  (I never read Off the Road either, and it’s possible it’s completely different than what I’m mentioning here.)  Anyway, the film threw in a few jabs of Camille yelling and screaming at Dean and throwing him out, which I guess is in the book anyway, but it seemed like they hung on that a bit to give that viewpoint a little more press.

The one thing that I really, really liked about the film was Viggo Mortensen as Old Bull Lee aka William S. Burroughs.  There wasn’t a lot of time to this story on the screen, but Viggo was dead on Burroughs, the speech and mannerisms and quirkiness, walking around his beaten Louisiana swamp ranch, croaking about revolvers and orgone accumulators.  The slight downside was Amy Adams cast as his wife; she simply did not fit into the movie at all as a drug-addled Joan Burroughs.  She’s a great actor, but far, far too perky and cheery to do something like this.  But Mortensen – man, he was incredible.  There was a scene with him sitting on the floor with a toddler Billy Burroughs, helping him draw and color on some construction paper, drawling on about vampires and sharp teeth to drain blood from people.  It was absolutely, positively brilliant, and made me wish there was a whole new reimaging of Naked Lunch with him taking over for Peter Weller.

Kristen Stewart played Marylou, which is sort of the butt of many jokes, and her lack of acting ability.  And honestly, she wasn’t bad.  She wasn’t incredible, and she certainly did not look 16, but she filled her minor role well.  Oh yeah, don’t go with your mom to this one — lots of sex, lots of fucking, and a couple of scenes of dudes kissing dudes, so this one won’t ever get shown in the midwest.

Overall, it could have been much worse.  Instead, it just wandered.  I guess that’s what the book did, too.  But books can wander like this a lot more than films, so what are you gonna do.  I’d give this a weak 6 out of 10, but honestly, the best you could possibly do for a commercially viable product is probably scraping the bottom of an 8.