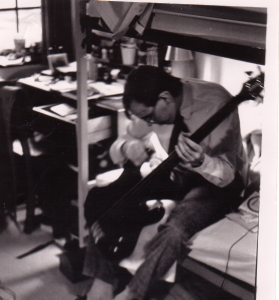 Me and my Carvin fretless bass, freshman dorm, 1990.

I have not been writing.  I’m sort of stuck between two places.  More on that in a bit.

I went into my usual writer’s block mantra of “I wish I did something other than write”, which motivated me to go to our storage locker and pull out my bass guitar and amp.  Before I put pen to paper, I used to play bass.  I sold my first bass when I left Bloomington, and in a strange act of serendipity, I saw a used bass exactly like my first one the week I left Seattle, and had to buy it.  I think I played it a total of five times before it went into storage forever, because I was too busy writing books and had all but forgotten how to play.

And I’ve dragged the thing across the country 19 times or whatever, and have not touched it since probably 1999.  But like I said, I had this urge to go buy a guitar or learn to paint or draw or do anything other than write, and I had this thing sitting in storage, so I brought it home, and thought if people who have strokes can re-teach themselves how to talk at the age of 80, I can re-teach myself how to play bass at 41.  Right?

I have this Cort headless bass. A cheap cousin to the Steinberger bass, it screams 1980s in a way big hair never could.  It’s got bad tone and a little fret buzz and the pickups need to be adjusted and I can’t get them right, because the E string is way louder than everything else.  But it’s still in once piece, and it works, and it was a number of Franklins cheaper than going to Guitar Center and buying a new one.

My original Cort was actually my second bass.  My first one I bought from the JC Penny catalog towards the end of my senior year of high school.  It was all plastic and China and stayed in tune for about seven minutes in a row, if you didn’t touch it.  My high school graduation present to myself was this Cort bass, which I saw used at a store in South Bend on a day I happened to have all of this graduation money in my pocket.  The electronics were stripped out of it, just the pickups and bare wires, no back cover and three holes where knobs were supposed to be.  I never really got the thing wired well, and always had problems with RF interference.  I got it refretted when I was a freshman in college, and traded that JC Penny bass for the fret job from a luthier student named Dorian.  (Never asked if he had brothers named Mixolydian, Locrian, etc.)

I’ve forgotten almost everything about music.  And my fingers are doing even worse.  I started trying to play scales and whatever little riffs I could remember, and my digits are nowhere near close to being in the right places.  Every other note is early or late or buzzing or uneven.  I wasn’t really sure how to proceed, so I started googling, and got information overload.

When I first learned to play the bass, it was 1989.  We did not have youtube.  I can now pull up instantly any number of instructional videos and pause and rewind and watch these guys explain and play and theorize and show off.  We had VHS back then, but that sucked.  I had a dub of a Stu Hamm instructional video, but one of my sisters recorded over it, and you couldn’t pause and rewind like you can now with DVDs.  I think our old VHS was one of those pieces of shit where hitting pause and then rewind took 19 seconds, and it made all of these clunking noises like a big block chevy running with no oil in the pan.  That’s all changed.

When I used to want some tab to learn new songs, I would have to walk to the music store (uphill, both ways) and get some shitty Mel Bay book that would have tab for “When The Saints Go Marching In” or whatever.  Now, there are a million web sites that have tab for days that you can download and print at home.  And there’s a site that plays the tab like a player piano, playing the guitar and drums so you can practice along with it.

The internet has also changed how you shop.  Nothing beats going to a guitar store and trying everything out, but when I was a kid, the music stores in Indiana were shit, and had the bare minimum of stock, all marked up to hell.  When I had to get strings for my headless bass — it takes strings with a ball on each end — I had to drive to Chicago, and pay something like $50 for them.  Now, Amazon, one click, done.  In and out for $25.  And ebay — jesus.  Put “Fender Jazz” into ebay and see where all of my time on the couch in front of the TV is going.

I can also plug my bass into my computer now, which is freaky.  It used to be you would save up a paycheck or two for one of these PortaStudios, which were really finicky about what kind of tapes you used and how often you cleaned them, and would lose quality after each generation of recording, and you still had to deal with a running tape and punching in at the right time and all of the hassles of analog.  Now, I fire up garage band, drop in some loops, and click to my non-linear heart’s content.  It’s very amazing.

Things are slowly coming back to me.  I’m obsessed with practice.  I’ve promised myself that for every hour I practice, I have a dollar to spend on a new bass.  I practiced five hours yesterday, and my left fingers are hamburger.  My technique has a long way to go, but I’m remembering theory, slowly.  It’s been a lot of fun.  It’s a lot more fun than banging my head against the wall because I can’t write.

About that, I guess I mentioned at the beginning of the post that I would talk about that.  But I’m out of time and this is a thousand words already, so maybe next time.