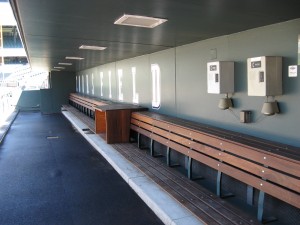 I haven’t been writing any posts about baseball this year.  Reason being, the wheels fell off the Rockies pretty early in the year, and then things just went from bad to worse.  I think I got a few weeks into April before I decided to stop watching, and things got exponentially worse after that.

I don’t know why I still follow the Rockies.  If I had any sense, I’d just jump on the Giants bandwagon, spend twice as much on tickets, and coast into the postseason with no problems.  But I started on this baseball kick when I lived a block from Coors Field, in that magic 2007 season, and now the curse of the whole thing is that I was programmed to like Colorado and hate the Giants and the Dodgers and the Diamondbacks and so on.

Okay, so 2011 ended in a shitstorm, a strong April start for the first damn time, and then the train completely derailed.  In 2009 and 2010, I had the ritual of counting wins and losses and magic numbers, coming out of a movie on a Saturday night and frantically starting up the MLB At Bat app on the iPhone to see if they managed to whittle away another half-game in the standings.  In 2009, they made the wild card; in 2010, there was hope, but they fettered it away.  In 2011, not even close.

Then you enter that period from October to February, where you hope the owners make some changes, dangle some big money out there for the free agents, hunt down some good roster moves with other teams.  Or, in the case of the Rockies’ ownership, it’s more like shopping for used tires in the five-dollar rack behind a shady gas station, picking through the leftovers for a mismatched set with almost enough tread to last you a month or two.  The Rockies almost never spend money on anything big, and this offseason was no different.  They did grab Marco Scutaro to fill in at second base, which seemed like an okay signing.  But the big need was pitching, and they got… Jamie Moyer, who is older than dirt; Jeremy Guthrie, a pop-fly pitcher, which never works out at Coors; and resigned to the fact the rest of the pitching staff would be the various minor-league parts and back-of-rotation pieces they had left over from 2011.

The 2012 injuries have been phenomenal. Here’s a partial list:

What’s even more laughable is how the ownership and management have treated the problem.  First, the plan going into this year was stupid, this “veteran movement” where a bunch of late-30s/early-40s players got slated for everyday positions.  That alone should have gotten the GM Dan O’Dowd fired and manager Jim Tracy demoted to equipment manager for the way he handled things day-to-day.  But instead, Tracy got an “indefinite contract extension”, and O’Dowd went on and on about how he was the greatest GM in the game.

So, the pitching rotation fell apart.  Only one pitcher (Drew Pomeranz) in the five-man rotation remains.  When everyone got gangrene or anthrax or hoof-and-mouth disease or traded to a minor-league team in Mexico, the powers that be thought it would be awesome to switch to a four-man rotation with a strict pitch count.  That essentially means none of Colorado’s starters will pitch more than 100 innings this year; none of them will be out of the single-digit win range, and what’s left of the bullpen will be majorly overtaxed.  This caused pitching coach Bob Apodaca to cry uncle and quit; he was replaced by “co-coaches”.

The Rockies were neither buyer or sellers at the trade deadline, which was odd.  I didn’t expect them to go hunting for new talent, which they did need, but wouldn’t do much good when you’re 20-some games out of first in your division.  But I also expected them to offload more of their long-term liabilities to get some younger prospects to start rebuilding.  They did trade Scutaro, and inexplicably added Jonathan Sanchez (who then lost three games and… wait for it… moved to the DL.)  But the inaction on O’Dowd’s part was a clear indicator that he thinks everything’s a-ok.

Everyone wants O’Dowd to quit.  And it looked like he would, but then he pulled some half-assed “co-managing” stunt, where he named his assistant the part-time GM or some lame bullshit like that, with him still “overseeing” everything.  It reminds me of when I worked for the university, and there would be these endless re-orgs, but with the same idiots in charge of the same flunkies, just with fancy new acronyms.

And I know running a baseball team’s probably hard work, and probably involves a certain amount of luck and momentum and blah blah blah.  I realize that if you can spend a quarter-billion dollars on salary, everything will be golden, and if you are in a small market, you’ve got to scrape and beg and borrow.  And I know that Coors is hell on pitchers.  But when you have a bunch of Jesus-freaks pushing their “everyone’s a winner” crap and never having the balls to just fire someone or maybe spend a few bucks on some outside talent, this is what you get.

And yet, I’m strangely nostalgic for the bastards.  It’s no fun to watch, and I will only occasionally check a score just to make sure they’re not getting no-hit.  I’m definitely not paying a couple grand to fly out to Denver and watch them drop two or three games to the Cubs or Padres.  And I’m not paying the now-hyperinflated AT&T Park ticket prices to sit in a sea of orange and watch the Rockies lose 16-2 to the Giants.  The season was over in April for me, and I do miss it, but it’s hard to grin and bear it at this point.

that is a hell of a flu.

you should treat getting cheap tix as a game, but you'd have to go to more than just rockies games. i just ran my numbers so far thi season and I have been to 17 Ms games so far this year at an average ticket cost of about 10.50, below the lowest non-special sale price they publish. this includes two games where tickets were paid for by friends and three where the tickets were freebies from the team for various reasons.

i spend more time working angles than thinking about the actual game, i suppose.

Funny, we almost lived in the same neighborhood. I moved into a place at 22nd and Market in summer of 2008. I only went to a couple Rockies games though. I grew up in Nebraska and never really knew what to do with professional sports.