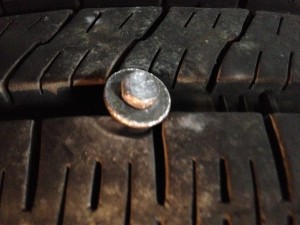 I bought new tires the other day.  I got one of them patched a few months ago, after attracting a nice bolt into the tread, and the TPMS light flickered alive last week, signaling a slow leak either in that plug, or from something else.  And my car, after almost five years and just shy of 50,000 miles, still sports the factory rubber, and although I don’t drive too much anymore, I felt a need to get a fresh set of tires.  So I went to this local tire place, a hole-in-the-wall run by this Mexican guy who’s far more honest than the corporate-owned tire hacks that would probably look at me and see their next four boat payments, pushing all sorts of extensive warranties and protective coatings and laser alignments with stories of catastrophic failure and imminent death if I did not comply. Also, the guy working there pronounces the Yaris “Jar-ees” which I find hilarious.

I was also distracted during the read, as some guy talked far too loud about his MG convertible.  And then at the corner of Market and Grand, some kind of protest started, one of these “let’s end violence by shouting violently at traffic” things I did not fully understand.  Shortly after I finished the book, I got my keys back to the Jar-ees and took off, my wallet $320 lighter, but once again feeling a solid 11/32″ of tread.   Awesome.