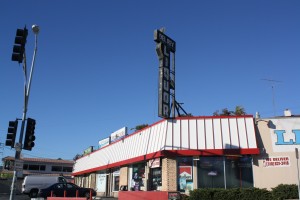 I watched Pulp Fiction for the millionth time last night. We’re trying to get through that AFI 100 films thing, starting with all of the ones I have on DVD at the house. I haven’t seen Pulp Fiction in maybe ten years though, so it was interesting to see it with some distance. I think the big thing I realized is how much of a big chunk of my past has to do with that movie, and how much it influenced my writing.

When Pulp Fiction came out in the fall of 1994, I was living with Simms, and that movie wrapped around his brain in a big way.  I don’t remember if I was with him the first time I saw it, but it absolutely obsessed him.  I think a big part of it was the soundtrack, which was all of this old surf music, a big thing with Simms at that point.  He had this band, a rotating cast of characters, called The Surfing Richards, and they were essentially this ever-changing group of music theory PhDs obsessed with Frank Zappa.  Their music was a mashup of Dick Dale, Devo, and Zappa.  So the Tarantino soundtrack really clicked with him, and our house was filled with it for months.

Simms became this prophet of Tarantino.  We’d be record shopping or walking around Bloomington, and he’d run into someone at the store he hadn’t seen in a semester or two, and ask them if they’d seen the movie.  If not, he’d immediately drag all of us out to the mall to see the next showing.  I think I saw the movie at least a dozen times because of this, and he really got off on seeing people’s reaction to the film.  We pretty much memorized the film, and it got worse when I got a tape of it.  Back then, there was usually a year between a theatrical release and the home video release.  But I found some guy on usenet that made a pirated copy; he worked in a theater, and set up a camcorder in the booth to record the whole thing, with the audio jacked into the booth sound.  I think I traded him something for it, and got a VHS copy months before it was available in stores.  This meant we watched the movie constantly, even running it in the background while doing other stuff. So in the back of my head, I’ve still got the film memorized.

This was the first time I’d seen the film since I lived in LA.  I remember when I first visited Los Angeles in 1997, the Tarantino-verse very much molded my preconceptions of the city, and the feel that I had for the city reminded me of what he caught in his films.  When I lived in LA in 2008, I worked from home and spent most of my time in Playa Del Rey, which is not really LA, but I’d have to wander around Hollywood or Culver City or El Segundo on various errands and doctor’s appointments.  And I also remember the week or so I spent driving all over the city trying to find us an apartment, going to all of these little places during the day to meet with realtors that never showed up for their appointments.

There’s one scene that really captured a specific feeling for me, and that was when Butch went back to his apartment to get his watch.  The scene is very quiet, nothing but ambient noise of the North Hollywood neighborhood, as he cuts through an apartment complex and then a vacant lot on the way to his apartment building.  That eerie silence, aside from the Mexican families cooking or babysitting kids in the background, and the sight of those old Bukowski-looking walled compound apartments captures a certain LA that I always felt when I was driving through side streets or walking from my car to various doctor’s appointments or whatever else I was doing back then.  The film itself is not an LA film in many ways; he captures bits and pieces in the background, but a crime film could be filmed almost anywhere.  What he does is use those background pieces to fill out the film and give it a vibrancy that transcends what a typical TV crime drama usually is.

I also found that there was a lot of dialogue that I picked up on that bled into some of my early writing.  When I was hacking out Summer Rain, there were so many exchanges and bumpers and pieces of wording that came out of Pulp Fiction without even thinking about it.  Tarantino’s dialogue can be corny, and tries too hard to be hip, and I think that rubbed off on me a bit.  One of the advantages of spending so many years rewriting that book is that I had many opportunities to kill my darlings, and beat the hell out of the dialogue until it shook any of those references.  But while I was watching the movie, little lines would jump out at me, things that I know got morphed into my character’s words at some point, and then cut.

Tarantino also relies heavily on cross-references through his work, little things like Fruit Brute cereal or Jackrabbit Slim’s (which also appears in an almost inaudible radio commercial in the background during the aforementioned scene with Butch.)  Simms, being a Zappa nut, was really big on conceptual continuity, which I assumed, being a literary idiot with about six credits of literary theory that I barely passed at that point, was some kind of common term, although now I find out that it’s something only used in the context of Zappa.  But Tarantino has all of these little recurring things that appear in all of his films, like Red Apple cigarettes.  And I never thought about it in the context of his influence, but I constantly do the same thing.

I think the biggest influence of Pulp Fiction to me was the idea of a non-linear narrative.  I spent a lot of time in my first couple of years of writing trying to figure out plot, trying to think of how to twist together a huge, linear story, and Tarantino’s films were one of the first things that really sent me sideways on that, and challenged me to think in other terms.  Rumored to Exist started at the end of 1995 because of a perfect storm of a few things swimming in my mind, all of which were consumed over a long and boring holiday break: the book Catch-22, and the movies Naked Lunch, Pulp Fiction, and Slacker. Put those in a blender, give me too much free time without an internet connection, and that’s what happens.

I’m almost done with my next book, and I’ve got a todo list a million things long.  But now I really want to watch Jackie Brown.  Let’s see which one wins.