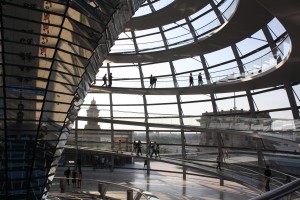 I am back.  My luggage is not.  It might be on a plane from Frankfurt, Germany to here, or it might be sitting on some Lufthansa baggage conveyor somewhere in Germany.  I will probably see it this weekend, and it’s no big deal, aside from the inability to wash two weeks of dirty laundry.

We had a good time in Berlin, although it seemed pretty short.  I am amazed at how modern and well-planned that city seems, yet how there’s so many different eras of history represented.  There’s all of this ancient history, old churches that somehow survived the wars, and then there’s this postwar history, all of the Stasi-era East German bland architecture that’s quickly being gentrified.  And then there’s all of this ultra-modern stuff, the New York-style glass and chrome buildings.  I guess from a city planning perspective, it helps if your city gets mostly destroyed and you can start over.  It’s the reason Japan has ultra high speed internet everywhere and all of the US that’s not in a million-person-plus city has a total disaster of copper wiring that can barely handle 56K modems.

We ate dinner at the Reichstag, which is the perfect example of this. It was built in 1894, and most famously burned down in 1933. It has since been redone and reopened, and the parliament now uses it. It’s such a strange combination of new and old though, because you’ve got this centuries-old exterior that everyone’s seen in World War 2 books, but the inside of it is ultra-modern, and seamlessly transforms into this all-glass interior that looks like something out of a movie.  Since we had this dinner reservation through Sarah’s work, we got to line-hop and go straight to the top of the building, into this huge glass dome with a 360-degree view of all of Berlin, and a corkscrew pathway twisting up to a cupola viewing deck at the top.  Dinner itself was good, but just being inside this building, and then seeing all of the city at night was phenomenal.

One of the other things we checked out was the DDR museum, which documented the history of East Germany, and the rise and fall of the Socialist country.  It’s not a very big museum, and when we went, there was a mob of high school kids who didn’t really give a shit, making it chaos.  But they had some very interesting stuff there, and this era fascinates me, because it wasn’t that long ago, just over twenty years, but everything from that era has completely vanished.  It’s like my fascination with old malls: you can easily pull far more information from the Civil War era than you can from a mall that was built in 1978 and torn down in 1994.  The museum had all of these packages from food and cosmetics and beauty products that were produced and sold by the DDR government, these generic packages that were very utilitarian instead of produced by ad agencies. When I was in high school, they churned out millions of bottles of Vita cola, and all of that stuff is gone now.  When I see something in a museum like an old WW2 plane, I have no connection to it, because it was before my parents were born.  But I went to college with people from Germany, had friends in the Army that were stationed over there, and I can clearly remember the existence of East Germany, so there’s a strange nostalgia for me.

I spent all day yesterday on the return trip, and almost got stuck in Frankfurt.  Our flight from Berlin was delayed by an hour, and we had to get from gate A20 to Z8, which involved a serious sprint across the airport.  We luckily did not have to go through security a second time, and they did customs at the gate.  It did mean I could not stock up on water for the eleven-hour flight, and I got stuck with about 150 Euros that I didn’t get a chance to change or spend.  On the long flight, I ended up doing an editing pass on my book, watching Anchorman, and then watching a ton of other TV shows, including a half-season of Louie.

So it feels good to be home, although I don’t have that laundry to wash, I don’t feel like sorting through the thousand pictures I took, and I’m not feeling terribly inspired to write.  But I need to get something done, so I should get to it.