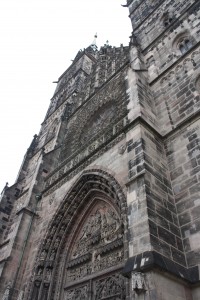 It’s my second-to-last day in the Bavarian city of Nuremberg, and it’s something like seventy degrees outside, but I’m in the hotel, looking out a huge window at the sun, listening to birds chirp, and editing a book I hope to get published by June, although I just realized that’s in eleven days, so given that the book doesn’t even have a title yet, I should start saying “by summer”.

I’m staying in the old part of town, which is all inside a giant set of castle walls, the kinds of things with bricks like the kind they build pyramids out of, with parapets and archer slits and giant arches and the whole nine.  If I was really into fantasy and Tolkein, this would be far more interesting, as would the 17 medieval-looking churches in the area.  It is pretty stuff to photograph, but when my mind wanders, I’m not thinking dragons and elves.  I’m mostly wondering what got destroyed by allied bombing, what got repaired, and what’s brand new, or at least post-1945.  Sometimes, it’s very obvious; you can see a building that’s totally new, and its neighboring buildings are new from the second floor on up, and it’s obvious a bomb hit right in the middle of them.

I’ve done a lot of walking. On our first day here, I walked to the Nazi parade grounds, which is where Triumph of the Will was filmed and all of those huge party rallies were held in the thirties.  A good chunk of it is now apartments, but they kept the remains of the never-finished congress hall and turned it into a museum.  It’s all in German, but you can get one of those English headphone things.  It’s fairly creepy, and focuses on trying to explain how the propaganda took hold in the country, and then how the Nuremberg trials happened after the war.  There was plenty of creepy Nazi stuff, and endless irony that the hall where the great Nazi congresses were to meet is now largely used as a storage facility.

Nuremberg isn’t a tourist destination, and English isn’t as prevalent as it was in Berlin.  The place also has a small-town feel.  It actually reminds me a lot of when I visited Stratford, Ontario back in high school, I guess because of all of the old-looking architecture and the fact that a lot of the town’s just working and doing whatever instead of busking tourists.

Even though the city isn’t huge – somewhere around the size of Oklahoma City – it does have a full underground subway system.  I bought a day pass for just under 5 Euros yesterday and took a quick trip around the U-Bahn.  It’s Germany’s newest train system, and has 46 underground stations.  Like all German trains, it’s ridiculously clean and incredibly sedate and orderly.  And like other German systems, the ticketing is practically on the honor system; there are no turnstiles or gates.  You’re expected to purchase a paper ticket when you use the system, but nobody was checking them and no machine stopped you from just walking downstairs and onto a train.  Maybe the cops spot-check people, but I didn’t see this happening.  I think I gave some train system ratings on a 1 to 10 scale system, and the U-Bahn here probably rates in the low 9’s, with Berlin being a high 9, the main difference being that the Berlin system will tell you when the next train is coming.

Lots of diesel cars and VWs here, which made me start thinking about Summer Rainduring yesterday’s walk. That book starts on the Friday before Mother’s Day in 1992, meaning we just passed the 20-year mark, which made me think way too much about it. It’s strange to wonder if twenty years ago I’d ever imagine myself 4500 miles away in Europe.  It’s strange to think about it even now.

Anyway, this book awaits.  There’s some kind of freaky festival tonight, the blue night festival, and nobody can seem to explain it to me.  When I ask someone, the explanation usually goes something like “there is this, how you say, acrobats, and in town square, there is, you know, man running, and with blue light on the buildings, you know?” which leaves me even more confused.  We fly to Berlin tomorrow at 8:30 at night, and then have three days until we return to SFO, at which time my sleep schedule will be completely fucked.  I’m hoping for an interesting evening with these blue lights or whatever it is.

One reply on “Nuremberg”