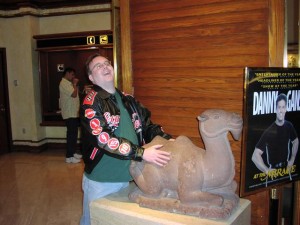 My birthday, ten years ago

Five years ago, I ate dinner at Per Se in New York.  I had a twelve-course meal that cost something like $750.  Then I went home and watched the movie Idiocracy.  Then my iTunes library crashed, and I spent the next day restoring it, so a huge chunk of my songs say they were imported on 1/21/07.

Ten years ago, I went to Las Vegas with Bill (who shares my birthday), Lon, and Todd, starting a long tradition of going to Sin City for our birthdays. Todd took pictures of me sodomizing pretty much every statue on the strip.  While we were in town, I bought 40 acres of land in the mountains of Colorado, starting that whole obsession.  I also shot a full-auto M-16, bought this ridiculous Coke jacket, and made far too many references to Fear and Loathing over the weekend.

Fifteen years ago, my uncle died from brain cancer on my birthday.  I lived in Seattle then. I went out the weekend before, with a bunch of people from Spry (Bill, Todd, others) and I bought a new bed, but I spent the actual day of my birthday at work.  A somewhat boring and introspective day, but those are good too.

Twenty years ago, I turned 21 and could legally drink.  Me and Bill went to Kilroy’s, the dumb jock bar in Bloomington, to get our free drink.  I still have the glass.  Then I went to a liquor store to buy something with more octane than the fruity drink with ten drops of rum in it, and the fuckers didn’t even card me, which pissed me off.

Twenty five years ago, I turned 16 and hit the age when I could get my driver’s license.  I didn’t get it for a few months, but that was the first big step in escaping orbit.  I think my obsession at that time was Iron Maiden.

Thirty years ago, I think I had a Superman cake.

Forty years ago, I was in Edwardsburg, Michigan and I still have the picture of me putting my hands in the chocolate cake that pretty much everyone has from their first birthday.

It’s now 8:43, and at 8:53, I officially turn 41. I’m still in bed, plinking at the laptop, enjoying a day off.  Later, I will go to Denny’s.  Not really thinking about my own mortality or where the time went or any of that stuff.  Just thinking about pancakes.

Anyway, thanks to everyone for everything in the last year.  I hope the next one is even better.