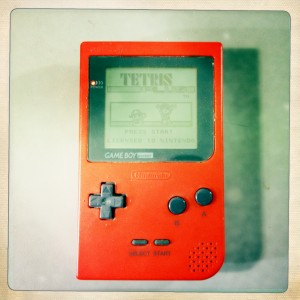 When the Game Boy first came out, I was infatuated with Tetris, still a new disease to me.  I could spend any amount of money playing Tetris in 1989 or 1990, until I had nightmares about falling blocks and that stupid song stuck in my head.  So when the Target stores started putting display units of Game Boys chained to a glass countertop in the electronics department, I’d spend hours mashing that little grey cross and the two red buttons to drop tetronimos on its pea-green LED display.  I lusted after the Game Boy, even though I didn’t even have a home computer at the time, and if I had the money for Nintendo’s portable game system, I would’ve had half the money for a cheap Amiga.

There’s something pervasive about handheld game systems.  All through the 80s, the systems grew in complexity, starting with those addictive football games that were nothing but a series of rows of LEDs, or the Simon-type games, things that just beeped and bleeped to get you to mash buttons and eat through nine-volt batteries, spending more of your time learning how to put the two terminals of a square battery on your tongue to gauge how much juice it still contained.  I had a few of these games, like this D&D game where you had to move through a maze and not get clobbered by these little LCD sprites, something I got for $20 and played the hell out of until it became boring.  I enjoyed the games, but the cost proposition was too high to fully embrace the format.

But there was always something intimate about the little pocket games, like a secret drug addiction you could slip into and avoid life.  The console systems, the pongs and 2600s and NESes, always seemed a more public affliction, something you’d set up in your living room and inflict on the entire family.  Maybe it’s because they involved a TV set, and this was a time when there were more American homes than TV sets.  But the pocket systems involved a personal closeness, something that was instantly on, always there, a tiny screen only you could see.

The mixed curse to these is they only played one game.  When you got the pocket Space Invaders game, it only played Space Invaders.  Sometimes, you could toggle a switch to get a different difficulty, or change your tennis game to play handball instead, but the units were almost entirely dedicated to that single pursuit.  A huge advantage to that is every game had its own controls, its own button layout and size and feel and placement and color.  When you played the aforementioned Space Invaders game, those buttons, along with the unique display elements, the custom LED or LCD panel, were your direct connection to that game; your pocket Pac Man or handheld Galaga had a completely different set of controls and look and feel, and was a different drug entirely.

(That’s my chief complaint about the Kindle.  I love it, and use it when I travel, but I don’t like that every book has essentially the same look and feel because I’m reading it on the same sized screen and holding the same exact weight in my hand and pressing the same exact buttons, regardless of author or title.  When I read a paper copy of a Philip K. Dick book, the binding and size and font and smell of the pages dictate a completely different experience than when I’m reading Freakanomics. But on the Kindle, there’s some latent similarity in the experience, which bothers me.)

Of course, the big advantage to a one-system-plays-all approach like the Game Boy is that you bought one system, then bought a bunch of cartridges and had a whole library of titles to play.  Unfortunately, it never worked that way for me.  I got the Game Boy Pocket in 1996, a gift from my girlfriend at the time, something I could use to whittle away the hours while sitting in airports on a long and tortuous holiday trip back to Indiana.  The Pocket is an often-forgotten model, an incremental redesign of the original, smaller, using fewer batteries, but otherwise the same unit.  They quickly came out with a color unit, and I felt deceived in that way that happens when your top-of-the-line electronics purchase is suddenly old hat.

My first game purchase was, of course, Tetris plus, a version of the original Russian plague with some additions, like if you cleared special bonus blocks, you could drop bombs and blow up pieces.  I played the living shit out of that cartridge.  The Pocket used dual AAA batteries, good for ten hours at a clip, and I went through many sets of Duracells for that machine. I spent late nights seized by writer’s block, sitting in bed in the darkness, a single halogen nightstand light trained on the not-backlit LED screen, trying to beat my high score on the little red plastic box.  I didn’t have a home video game system, and this was long before phones with games, so this was a unique addiction to me.

But I couldn’t really find any other games as prevailing as Tetris.  I think I bought one or two new cartridges, including a Star Wars platform game with horrible graphics; I got stalled trying to navigate through the Death Star and couldn’t go any further.  I also went to my favorite used record store in Seattle on University, and went through their stack of loose and book-less cartridges, trying to find anything interesting.   I found a Boggle game, which was completely useless with no keyboard, and a Mahjongg game which caused migraines because the tiles were so unreadable on the low-resolution screen.  For whatever reason, Tetris was not only the killer app for the system; it was the only app.  Everything else was either too graphics-intensive or needed more CPU or didn’t work well on a cartridge or begged for network connectivity or needed different controls.  Tetris was the One True App for the system.

Nintendo has gone through two major iterations (GBA, DS) and many minor upgrades of the system, and I never got onboard with any of them, although there were moments, usually during fire sales of obsolete systems or fits of extreme boredom stuck in airports, that I considered it.  But then the Palm came along, and now phones can play games almost as well as the handheld systems.  This is ultimately Nintendo’s doom, just like how the emergence of home computers killed dedicated video game systems in the 80s.  Why spend hundreds on an Atari 5200 and an Atari 800 when you can get an Atari 800 and play games plus “learn computers” and do educational stuff? Never mind that the 800’s games were a slight step behind the 5200’s, or that 99% of the people never did any educational shit on home computers, regardless of the huge revolution that was promised back then.

It’s the same way now.  Why buy a Nintendo 3DS for $200 and then buy a laptop or iPad for “educational” stuff, when you could just buy the tablet or PC, and play Angry Birds on that?  There are several minor holes to shoot in that argument – I think the MSRP on a 3DS got dropped for the holidays; the 3DS is a better “true” game machine and has better tactile buttons and 3D technology blah blah blah.  But parents don’t shop for toys based on vertex performance of the GPU; they go on groupthink, and that says that if you buy your kid an iPad, they will “learn computers” and become a genius, case closed.

But there’s something about that tactile relationship to the Game Boy or the older pocket games that Nintendo could exploit, and I don’t know how.  Maybe Nintendo will need to fail, maybe there’s a need for a huge video game crash like 1984 all over again, and another company will have to rise from the ashes to convince people that something other than Farmville is the future to gaming.  But what will that be?