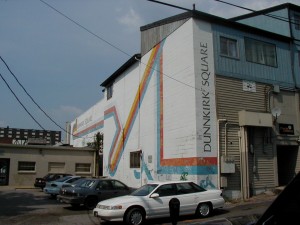 I find myself thinking about Summer Rain a lot lately, which is ultimately dangerous, I think.  Next year will be 20 years since the Bloomington summer I fictionalized, and ten years since I actually last set foot in the college town.  I think about the book because it’s a default way of writing for me, fictionalizing my past, and I often wonder if I should write another similar book talking about the other pockets of time in Indiana, or Seattle, or whatever.  I actually wrote a good chunk of a novel that fictionalized the end of my high school experience, and the battle to get the hell out of my small town in Indiana, back in the late 80s.  It’s about 50,000 words, but ultimately plotless and would be difficult to spin into anything useful.

I pulled the original Summer Rain manuscript into Scrivener, with thoughts about cleaning it up and doing an ebook version, but it was absolutely painful for me to look at some of that old writing.  It screams “first book” and makes me want to dive into it and rewrite everything, which is the danger.  That’s a huge rabbit hole to fall into, and one without much reward.  I’ve often thought about going back to rewrite the whole thing from scratch, or maybe come back and rewrite it as a book told by a person twice as old as the original character, returning to the town he lived in half a life ago and comparing the pieces of that past with what really happened in his life.  The John Knowles book A Separate Peace was an unlikely inspiration for me, and he frames his book in a similar way.

One of the things that I ponder sometimes is all of the stuff I left out of the book.  There were a few story lines and characters that ultimately did not add anything to the book and were left out, and there are bits of that summer that I later recall that simply didn’t relate to the rest of it and never made the manuscript.  Sometimes I’ll see something that reminds me of the era, and I’ll then remember it never made the book, and is just a lost, unassimilated memory that I should probably catalog and use elsewhere.

One of those memories involves driving in a tornado.  I was at the College Mall, before a shift at the radio station, wandering the concourses and hallways with no real purpose except to kill a few hours until I went on the air.  It started pouring rain, which was no big surprise – one of the central themes of the original short story which morphed into the book was how it rained every single time I had a radio show, and I’d spend those lazy summer nights in this shithole college radio station, listening to death metal and watching the rain fall on the downtown in the darkness.  But while I was at the mall, the sirens went off, those air raid sirens that typically denote the start of a nuclear war or godzilla attack.  Someone came on the PA and said everyone had to go to the mall basement because a tornado had been spotted.  This amazed me, because I did not know the mall had a PA system or a basement.

As everyone shuffled into the basement of this mall, I thought for some stupid reason that it was my duty to get to the station and broadcast news about the tornado.  Never mind that nobody listened to the station, and I didn’t have a ticker tape or news feed or national weather service thingee to give me any data other than what I could see outside my window; I felt some need to get to the station, as opposed to being trapped in a basement with a bunch of strangers.  So I ran out to the parking lot, and drove.  And I got to the station, there was no news, no destruction, end of story.  But the experience of driving in this near-tornado weather was surreal, the darkness and the quiet of the two pressure fronts, punctuated with the sounds of rain dropping like pellets of stone onto my windshield, the low howl of the wind, and the feeling that my little toy car would go airborne at any given time.  It wasn’t enough of a story to become an actual story, but when I see a tornado on the news, that’s what entered my head.

There was also this entire subplot that I couldn’t get into words about this girl that I tutored who I had a horrible crush on, and who it turns out had a horrible crush on me, and of course nothing became of it, except I spent a summer trying to explain Motorola assembly code to someone who probably should have changed majors.  She also had this absolutely gorgeous roommate, who I never talked to, and then one night had an hour-long spontaneous conversation with her and found out she was a manic-depressive and we shared the same psychiatrist.  And she had broken up with her boyfriend the day before, and was going to Europe the next week, and it was one of those things where I thought if everything was different, I would have had a shot with her.

Years later the tutor-ee converted to the Baha’i faith, and convinced me to come to a meeting with her.  I had little interest in converting to a new religion, but still had some kind of feelings for her, and agreed.  And I found the Baha’i religion fascinating, how they believe that all religions are essentially true, and believe in all of god’s messengers.  All of the people were friendly, and there was no heavy dogma or evangelical angle.  But there was still the whole belief in a god thing, which I couldn’t do.  Also, no premarital sex was a deal-breaker.

There’s something psychologically stopping me from writing about these things, and I don’t know how to quantify it, other than to say I don’t care about it anymore.  Bloomington seems so distant, and the present seems so dull, so I feel a need to write about something completely synthesized.  There are a lot of things like that, things that I no longer give a shit about that were once almost religious battles for me.  The Coke versus Pepsi sort of battles in life are things I just honestly do not care about anymore.  That’s not a problem in the sense that I don’t throw a fit when I go to a restaurant and they don’t have my brand of fizzy water.  But does it cause a problem in that all writing needs to be, in some way, about unresolved conflict?