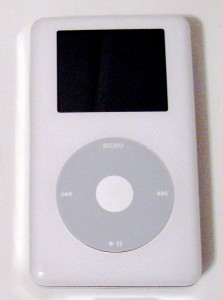 I think when I sit down to write, I now spend more time trying to figure out what I want to listen to than I do actually writing, and that’s a problem.  My mind bounces between two solutions: one is to spend some inordinate amount of time and money finding all new music that moves me.  The other is to declare iTunes bankruptcy, and either delete every song in my iTunes library, or rate every single one at zero stars, then put it on shuffle and re-rate everything until the 11,000-some tracks more accurately describe what I like, instead of the current rating situation.  I think I “finished” rating all of my music, aside from new additions, in about 2007, and I would like to think I have evolved since then, but who knows.

I think when I’m at the height of my collector snobdom, my worst fear is that I will become one of those people that lock into a certain artist or time period and never acknowledge that there is any music outside of that sphere of influence, ever.  I dated a girl in college who was like this with Billy Joel, and it (plus the fact that she was bat-shit insane, but there’s a cart/horse situation here) were the reason I walked away from that relationship like an unemployed person walks away from a $500,000-underwater mortgage.

But keeping up with new music is work.  I briefly tried to do this when I was reviewing new music for a now-dead web site, and it seems like the easier it is to get music, the harder it is to find music.  I can turn on iTunes genius and fire up Pandora or Spotify and point my web browser at a million different news sites and fan sites and get up-to-the-second email blasts from my favorite artists, but it seems like I find about 4% of what I used to find by wasting half my Saturday going from A to Z at a half-dozen different local record stores.  And it seems like the more I buy or download, the less potent the music is.  When I was in high school and could only afford to buy a tape a week, almost every one of those tapes was gold.  Now. I can add a hundred tracks at a clip to my library, and I still can’t name an album I bought in the last year that can stand up to repeat plays.

Albums are always time machines for me, but I’m finding the harder it is to find an album, the higher the chance of it being powerful to me.  An example: I accidentally found out about Gary Moore in 1988, while on a record buying spree in Canada.  A guy working at a store in Stratford told me I should really check him out, and I did, and I loved it.  A couple of those albums were indelibly marked on my past, and of course those tapes got lost or fell apart, and I went for years wishing I could hear them again.  And in the 90s, finding those things was next to impossible; they were out of print, or were “imports” and I never could track them down, and doing a web search on Gary Moore (Alta Vista back then, I think) would turn up maybe four hits, none helpful.  When I eventually found those albums, they were absolutely efficacious, and transported me through time like I suddenly had a Delorean with attached flux capacitor.  I think if I would have been able to just type two words and a credit card number into a browser and instantly hear those songs, it would have been nowhere near as powerful as spending months scouring every non-chain record store in Seattle.

But now I worry about listening to those tracks so much that they won’t work anymore, just like how I worry about drinking my twelfth diet coke of the day and still feeling lethargic.  I wonder if I should set aside that discography and find something new, and hope it will someday be my bridge back to 2011.  I hope that someone else out there is making something as mind-altering as the music I cherished 20 years ago.  And I wonder how I will find it, especially when I mention this to people and they say, “Oh, you need to listen to Arcade Fire.  They have like ten members or something.”