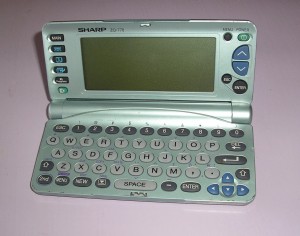 When we were out for dinner last night, I was talking about the AT&T “you will” ad campaign.  It seems like this happened ten minutes ago, but it was twenty years ago.  I don’t entirely know why I remember these ads, since I didn’t have a TV at the time, and downloading a ten-second 320×200 MPEG would take you half a day, so I’m sure I didn’t watch it online.  But the commercials featured a bunch of far-future technology, which now either exists (the ezpass, telemedicine, RFID, sending PDFs from your phone) or is so stupid we’ll never have it (home automation, robot butler crap.)

What amazes me, thinking about this, is all of the technology that was ubiquitous twenty years ago that a kid today would totally not understand.  I wrote about floppy disks yesterday, but here’s a few more off the top of my head that are dead forever:

I guess I forgot to mention the death of the VCR, so maybe that’s another later post.  I also wonder if DVRs will still be around.  Seems like it would be much more efficient if the cable company stored copies of everything and you browsed them like the web, instead of trying to “catch” the recording and store it on your end, and then if you miss setting the recording or the stupid thing ends 90 seconds after the 30 minute mark, you aren’t screwed.  Why don’t the do it that way now?

4 replies on “On Mix-tapes, floppy disks, and gopher”

Cable companies can't run head-end DVRs for everything because the content providers won't let them; at-home DVRs are considered the same as VCRs with respect to fair use but an aggregated approach is licensed differently.

I figured it was something like that. They do on-demand for some shows, but it's always a toss-up on when a given week's episode will get posted. Also, the UI for comcast's on demand is mostly unusable, and they put the shittiest commercials ever in the middle of the shows, always pegged at full volume ("Seniors! Have you had your prostate removed? You may be able to sue!") and they now have a way to disable fast forward on certain shows. It's almost always better to wait until it ends up on netflix or to just go buy a subscription on Amazon.

Yep; ideally watching TV shows would be an aggregated RSS-like mechanism where it shows you what's new on shows you follow without you needing to worry about the details of whether it's recorded locally or streamed or what. But that would make channels largely obsolete (maybe that's another thing that should go on your list.)

I love the "ghetto blasters" you can buy now that you just stick your iPhone into. Just because you can stick an iPhone into it doesn't make it a good idea.

For a more in-depth stroll through ghetto blaster history:
http://onegoodminute.indieposit.com/2011/05/25/to…