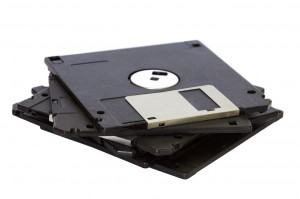 Someone recently posted a sort of call-to-arms for people to dig up their old floppy disks and back them up immediately, because it would only be a matter of moments before the magnetic media would flake away and vanish forever.  I remember hearing scare stories way back when, that after some huge amount of time like ten years, disks would simply fall apart and vanish, and I thought, “shit, 2002 is like forever away, so nothing to worry about – better get back to flaming this idiot on alt.rock-and-roll.metal.heavy about why Entombed is going to always be the best band ever.”  Now, I don’t even know where the hell my floppy disks are – I think they’re in my storage unit, but they could be in a box somewhere in the house, or they could have all ended up in the garbage in one of the last dozen moves I’ve made.

I remember the first floppy disk I ever had.  It was in maybe 1985 or so, a 5 1/4″ Memorex single-sided disk I had to buy for a computer programming class.  There was no real difference between single and double-sided disks except for a little notch on one of the sides, and you could use a hole punch or x-acto knife and carve out that little hole and you’d magically have twice as much storage.  There was some urban legend or unverified factoid (this was way before google or snopes.com) that the disks that didn’t pass some quality test on both sides became single-sided disks.  And they sold some little device in the back of Compute magazine that punched the hole for you, but why pay for it when you can just use a knife for free?  I saved all of my Apple II BASIC programs on one side of the disk, and then used the back side to save all of my Commodore stuff when I was using my friend Matt’s computer to play games.  I had a Commodore 64, but never got a floppy drive, so I never amassed a huge number of disks like some of my friends did.

I came up on computers around the time when two formats dominated: the 5 1/4″ floppy disk, and the 3 1/2″ not-as-floppy disk.  When I went to school in Bloomington in 1989, I saw both of these in the wild, and it was always this curse that if you chose a 3.5″ disk, you might go over to a friend’s or some off-the-beaten-path dorm computer lab and find they only had the 5 1/4″ drives.  If you used a Mac, you didn’t have this issue, but you had to actually find a Mac on campus, which meant waiting in a Cedar Point-length line for a seat, or spending the cost of a decent car for your own home computer.  And these were the days before “the cloud”, or where “the cloud” meant an account on a VAX machine where you could store maybe a four-page paper, if you could wait an hour to upload it over your 2400-baud modem.

The format also caused great confusion when I started consulting, because people thought “hard disk” meant the plastic-encased 3.5″ disks, when it really referred to a high capacity fixed-platter device.  I probably spent at least a month of my life on the phone with someone playing this “who’s on first” game of trying to determine what the hell they were talking about.

I bought a ten-pack of those 3.5″ disks in my freshman year, but when I returned to IUSB for my sophomore year, the newer and smaller drives were nowhere to be found.  I bought a ten-pack of 5 1/4″ disks every payday, and would promptly fill them up with stuff I downloaded from the internet, old issues of Phrack magazine and pieces of pascal code, images from wuarchive and shareware games that never worked right on the school’s crap computers.  I never labelled anything, and within a year, forgot what was on almost every single one of these disks.  When I built my first PC in 1991, it had both sizes of drive on it, but I eventually phased out the use of the 5 1/4″ disks.  I think my last “big” drive stayed in the tower for a long time though, until the top two wide slots in the case were populated by a CD-ROM and CD-R drive.

My first hard drive doesn’t really count – it was this 5 MB winchester drive that I swear dimmed the lights in the whole damn house when it spun up.  It wasn’t until 1993 that I bought a proper IDE drive, a whopping 40 MB drive for $100.  But floppies were still very much in play.  Every time I wanted to reinstall the latest Linux on my machine, I would haul out a pile of 20 or 30 floppy disks, go to campus, and start downloading.  Of course, I’d always get home and the install would crap out because disk B7 had errors, and I’d have to start over.  I had an endless supply of disks though, because when I worked in the labs, the lost and found bins would fill with disks that were left behind, and after a semester, they would end up in consultants’ pockets.  There were also plenty of disks that came with hardware, install disks for bulk-purchased software that were never used, and promotional things that would end up in my collection.  I had many a disk that had a glossy Quattro Pro or Microsoft Sound Card sticker that was crossed out with marker and sloppily labelled “SLS 1.02 X7/10”.

Apple was the death of the floppy to me.  I mean, I had a Dell laptop I bought in 2001 that had no internal floppy, but it had this external caddy that held either a CD or a floppy drive, and I had both.  But when I switched over to the Mac Mini in 2005, it had no floppy disk drive, and no provision to hook one up, unless I went and bought a USB one.  By then, everything was on my hard drive, and if it had to be portable, I’d either burn it to a DVD or upload it to rumored.com.  I still had the PC tower, and it still had the floppy drives, but after I got the Mac up and running, I powered off the PC, and only powered it back up maybe two or three times.  And that PC ended up getting left in the trash room of my LA apartment when we split for SF.

I don’t know where those last few floppies are, or if any archaeology is needed to recover them.  I think most of the writing I want to keep ended up on this hard drive, and an installer to Epyx Summer Games for the PC isn’t useful to me anymore.  But I do miss the format in some strange way.  It’s entirely useless in the era of thumb drives and SD cards and DVD-Rs, but it’s a token back to the brief time between garage computers as big as a tank that involved soldering and toggle switches, and the era of ubiquitous computing, when there are more computers than people in the country.

Thanks for all the memories. My first computer was an Apple II+, plus I used some very old donated IBM ones at school. All of them took the big floppy disks. It would be a long time before I started giving each student their own colored 3,5" disk to save their Powerpoints and Word documents.

We have come a long way. I used the old 16k Timex Sinclairs to teach Basic to 5th graders!!