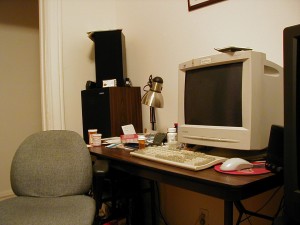 I bought a new monitor recently, mostly because I was able to partially subsidize it with points from my Amazon card, which I now use to pay for absolutely everything in this mortal world, except for the couple of things I can’t pay using a Visa card.  I’ve been using the same ViewSonic monitor since 2003.  It was this 20″ LCD, my first flat-screen, which at the time was radical, but now you can’t find a CRT monitor unless you visit a museum or a landfill.  I don’t remember how much I paid for that monitor, but I think it was something insane, like just under a grand.  And aside from being monstrously huge, it worked well, functioning as my main display for my next four computers plus a score of other assorted laptops and work computers.  If you look at all of the pictures in this post, about half of them are with that monitor, from the monster tower PC in my old Astoria apartment to the Mac Mini sitting on my desk overlooking the big Denver parking lot to my white Macbook and the view of the playa in LA to the newest MBP and the loft in Oakland.

The new monitor is another ViewSonic, my third one, if you include the gigantic CRT I bought way back in Seattle.  I wanted to hold out and buy an Apple display, although everyone always bitches that Dell makes the same exact monitor for hundreds of dollars cheaper, which is true, except for the fact that they don’t, and their 27″ LED costs the same exact price as an Apple 27″ LED Cinema display.  So instead of spending a grand on a 27″ screen, I spent just under $200 on a 24″ screen.  And although it’s 4″ bigger than the old one, it seems tiny, because it weighs about a third as much as the old one, and it has very little frame around it.  And instead of a stand suitable for mounting an AT-4 antitank missile, I can use a thin little pole-mount thing and rid my desk of the huge pile of books and dictionaries I was using to raise my screen to the correct height.

The new screen runs at 1920×1080; the old one was 1600×1200.  So I lose a few pixels of height, but gain more in width.  I don’t know if that’s ideal; I think if I do any long, protracted amount of editing on a book-style manuscript, I’ll turn the thing sideways to have a nice 1920-pixel Kerouac scroll of an editor window on my screen.  I spend most of my creative writing time sitting on the couch with the laptop, like I am right now, so I can spend those few minutes of freedom typing away in the bright sunlight that streams through the loft’s giant west-facing windows.  For work stuff, it’s nice to have multiple side-by-side windows open, although I’ve recently moved to FrameMaker 10, which has a whole slew of “pods” and docked palettes and other useless Adobe crap I can’t seem to turn off polluting the left and right sides of my editor window.

Probably the most disappointing part of the upgrade is that my KVM switch seems to be noticeably slower on the kick from system to system.  And of course, the upgrade was flawless on my Mac; plug in the new monitor, pull down the Display Preferences doodad, and select the new resolution.  Windows 7?  Not so much.  It took three reboots and an afternoon of fucking around with driver disks and updates and having to google the entire history of the DVI format until I figured out how to make a custom display size and click through 17 warnings that I was about to explode my monitor and are you really sure you want to do this.  Windows hardware may be cheaper, but not if you value your time.

Aside from the resolution, the difference between LED and LCD is amazing.  When I was at the big S, the main building where we ate lunch had a bunch of their product displays, and for a while, there was a comparison of the old LCD TV and the new LED TV, and it was night and day on the brightness and clarity of the LED.  This was a year ago, and prices on LED TV were ludicrous, absolutely unjustifiable, if you’re in the situation where tech purchases require spousal approval.  Now, in mid-2011, this monitor cost basically nothing.  It’s amazing how fast prices fall on stuff like this.

Why does any of this matter to you?  It doesn’t.  But I used to write about this stuff all the time, the computer upgrades that made up my tool chain, the things I used on a daily basis to carve out these books.  And now, with a decade or two of space between me and them, I look back and wonder exactly when I did swap out that giant CRT that I hauled across the country with a somewhat smaller LCD, and I’m happy that I did manage to capture it in an entry here.  And some other random thing enters my head – like a blind date I had once with a graphic designer, some time before 9/11, when we walked in the shadows of the World Trade Center after dinner, and I wonder what her name was or when we went out for that dinner, and I realize I didn’t keep a journal then, and I lost all of my email from that entire year in a stupid rsync backup mistake, and now I have no fucking idea on any of it except I definitely know it happened before September of 2001, but that’s about it.

It’s just like everything from the 90s.  I’ve been kicking around this book idea, a bunch of stories that take place between 1990 and 1999, and the other day I realized I don’t have one single god damned digital photo from that era, because I bought my first digital camera at the end of 2000.  And I didn’t keep any kind of journal until the mid-90s, and I always wish I would have written everything down, and taken pictures of everything, so I could relive those eras just enough to capture the details in a story.  So, maybe I need to write down more.  And here we are.